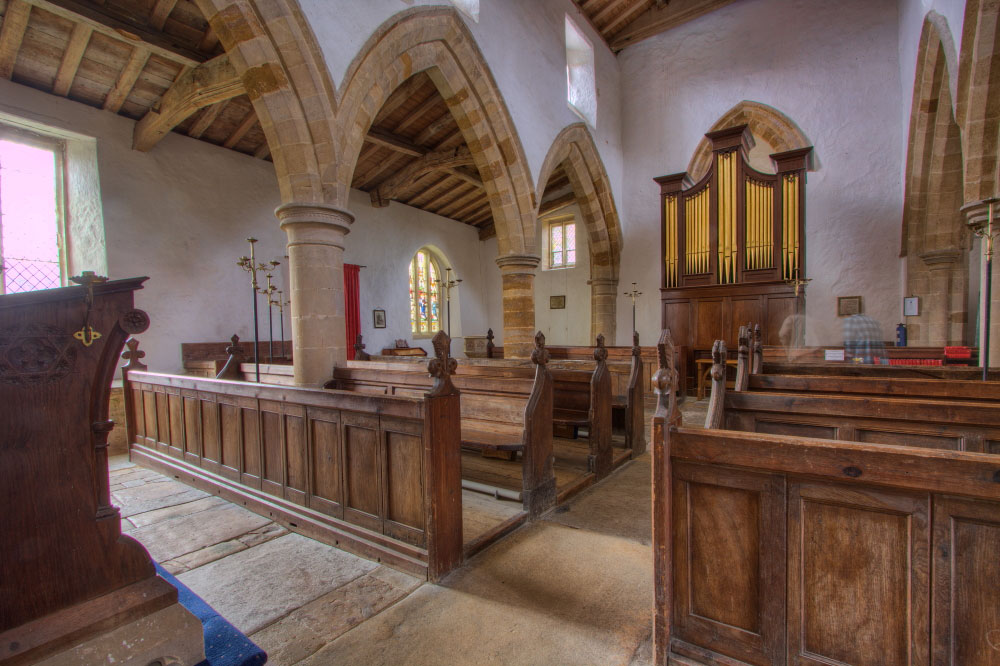 Stoke Dry is small village in Rutland of around 14 dwellings just two miles south of Uppingham. It overlooks Eyebrook reservoir and has views into Leicestershire & Northamptonshire across the Welland valley. It is sited on a slope and in the Domesday Book was part of the manor of Lyddington and hence the Bishop of Lincoln. There is of course far more information on the manor and early years at the British History site and I have added a link to the page. The church of St Andrew is an usual looking church which consists of a nave, chancel, north & south aisles, south Digby chapel, west tower and porches to the north & south. 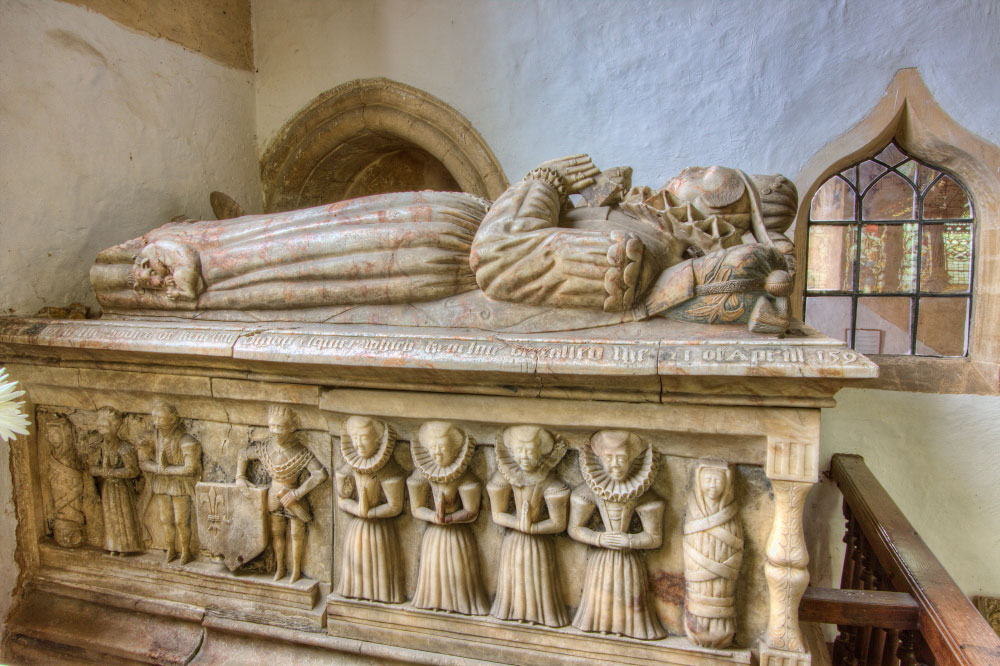 Alabaster tomb in the Chancel for Kemelme Digby and his wife.

The unusual look of the church externally is explained by the slim west tower and the addition of a upper room to the north porch with its oriel window which was added on the 16th century, unusually this is still the main entrance into the church.
The nave is the oldest part of the church from the 12th century, the chancel was rebuilt in the 14th century and the chancel arch has some fine carved Norman shafts from around 1120. These display carved beasts and flowers. On one side is a man pulling on a rope while the devil cowers underneath.

Norman carvings on the chancel

Next to be added was the south aisle in the 13th C with the south porch dating from the later 17th century. The north aisle and clerestory were added in the 15th century. The lower part of the tower dates from the 13th century with later rebuilding higher. 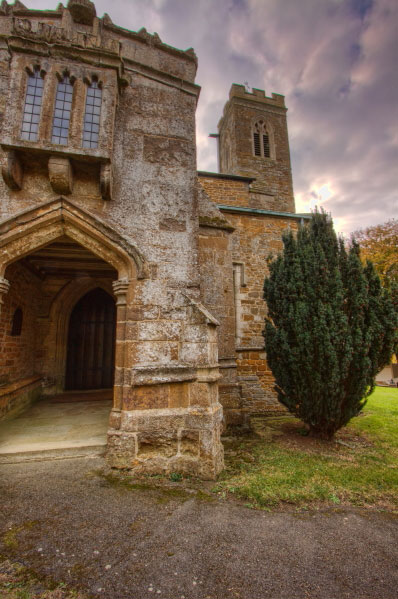 Porch with upper room window and the slim tower

The interior is the real delight with so many items of interest this church really does have lots to see and admire. So let’s start in the chancel area and work round. The chancel arch with its finely carved Norman shafts has the effigy of a bellringer and also the devil trying to shut off the sound and run away from the Sanctus bell. Inside the sanctuary under the east window is the alabaster monument of Kenelme Digby and his wife, the grandparents of Everard Digby who was hanged for treason for his part in the Gunpowder plot. They had eleven children of which two died as infants. 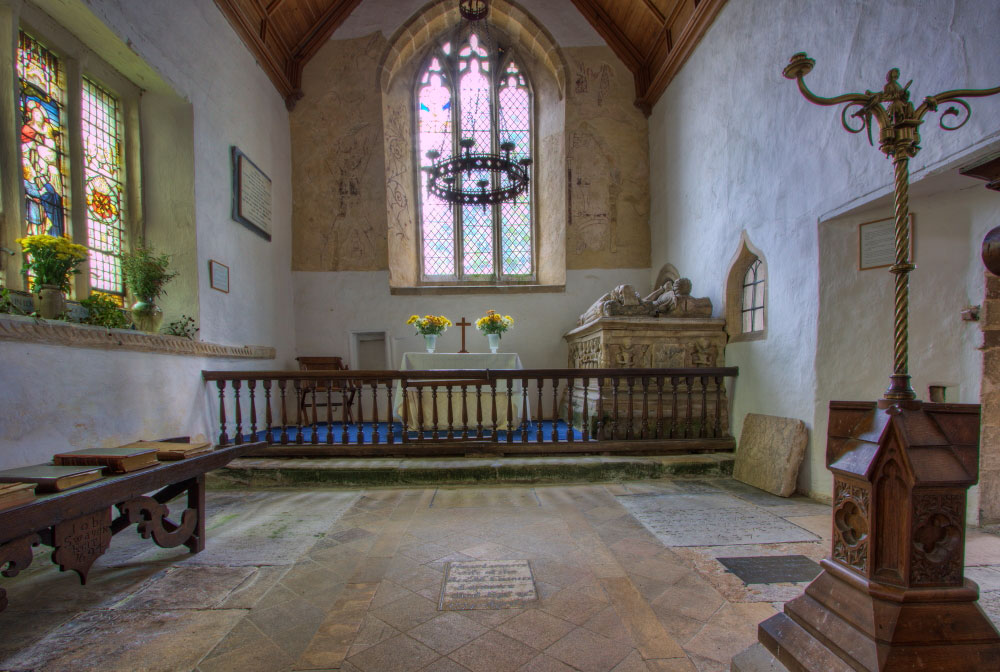 St Andrew also has more than its fair share of medieval paintings, in the chancel area above the east window is St Andrew to the left of the window and the Virgin and Child on the right, these date from the 14th century. The remains of the orginal font also lie in the chancel.
Through the small doorway to the south we enter the Digby Chapel and straight away we come upon the beautiful 13th century mural on the south wall depicting St Christopher carrying Jesus on his shoulders and to the left St Edmund the martyred King of East Anglia tied to a tree and shot full of arrows by Danish bowmen. Also in the chapel we have another tomb to Everard Digby who died in April 1540 at some point his head has been deliberately damaged. The ogee shaped window between the chapel and chancel is a hagioscope, designed to enable worshippers in the chapel to see the Host at the altar during Mass. 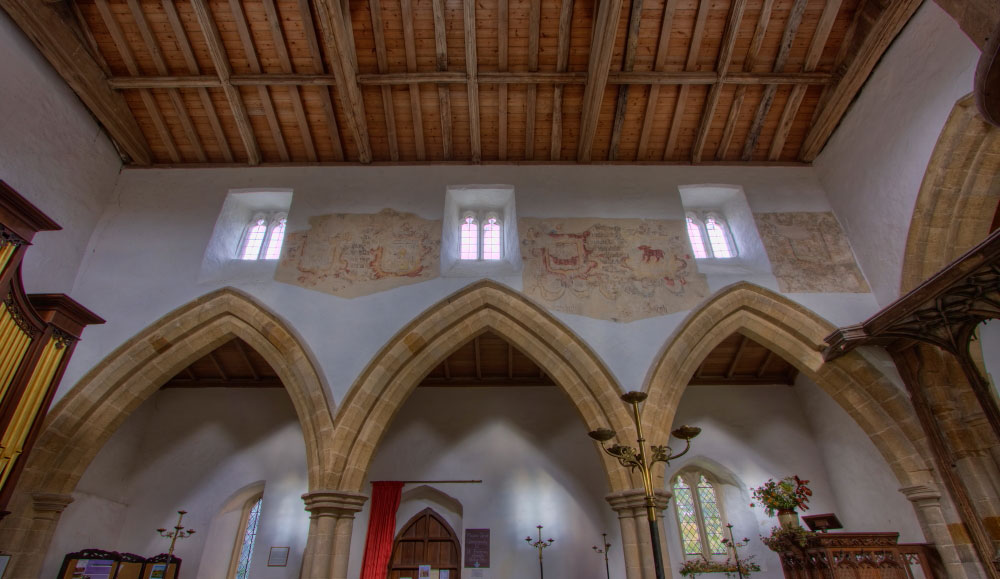 The rood screen is 15th century but is thought to have come from another church. There are more paintings in the clerestory that depict emblems of the twelve tribes of Israel, these are 16th century. In the south aisle there is slab to Jaquetta Digby who died on 29th June 1496. This has been heavily disfigured. The lovely organ is by Lincoln of London and is dated 1810, it was restored in 1992. This exceptional church with its fine medieval paintings, its monuments and its unusual external appearance is of course worth a visit. There are nearby amenities in Uppingham and as an added bonus this church is usually open during daylight hours. If you are disabled there is no easy access to the church (a flight of small steps) and as such it will be difficult for wheelchair users to gain entry.