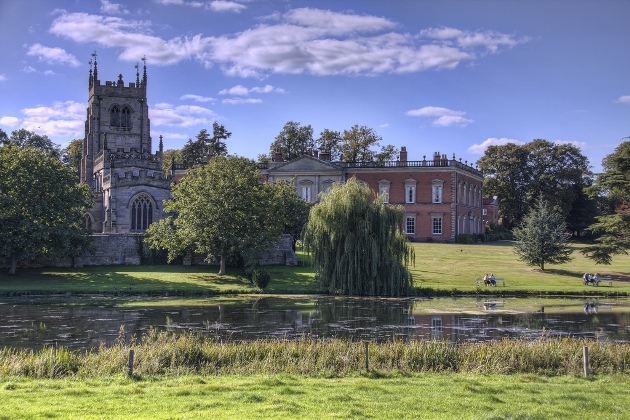 Perhaps one of England’s best situated churches this is a rare treat and one that should be visited. Built for Sir Robert Shirley between 1662-65 in Gothic style this was the private chapel of the Shirley’s who lived in the nearby Hall for generations. Set in a beautiful landscaped area with the lake and rolling wooded hills of Leicestershire as a backdrop it really is a special place and one of the few churches built during the Commonwealth period.The church of Holy Trinity consists of a west tower, nave, north and south aisles and chancel. Above the west entrance in the tower is the inscription;

“In the year 1653 when all things Sacred were throughout ye nation, Either demolisht or profaned, Sir Robert Shirley, Baronet, Founded this church; Whose singular praise it is, to have done the best things in ye worst times, and hoped them in the most callamitous. The righteous shall be had in everlasting remembrance.” 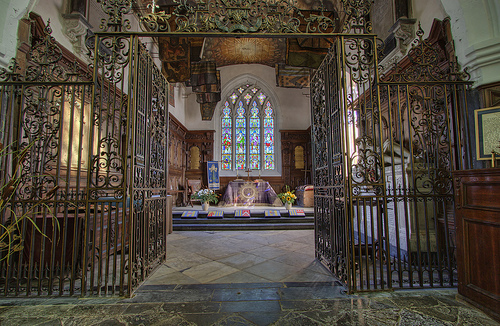 The chancel behind the ornate wrought-iron work is very fine

We have to remember that this church was built during the Civil War and that Sir Robert Shirley who was a Royalist and supporter of the King never saw his church completed. Cromwell on hearing of Shirleys fine church is reported to have asked why he could not pay towards a ship for the Navy when he could afford so fine a building. When he refused he was arrested and imprisoned in the Tower of London, where he died, aged 27. The church was completed by the guardians of his son. 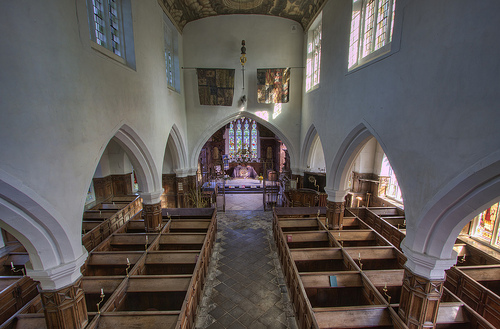 Taken from the west gallery, this shows the boxed pews and chancel

There have been very little changes to the building or the interior since when it was built, the only major change is the East Window which dates from the 19th century. The original woodwork with box-pews, west gallery, panelling screens, lecturn etc which were completed by the joiner William Smith still remain. The lavish interior fittings and decorations were a result of a change from the usual Puritan plain churches to something more rich and ornate that Shirley (and Archbishop Laud who was executed in 1645) believed in. 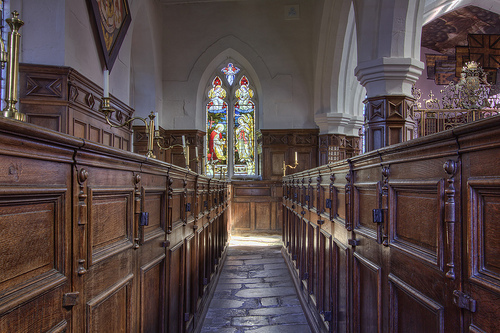 South aisle view from west end, in the right hand pews are some 18th century engravings

The chancel screen with its fine wrought-iron grille work seperates the chancel from the nave. On the altar is the original velvet cloth covering a oak table, the tomb on the south side of the chancel is to Robert Shirley, Lord Tamworth who died of Smallpox in 1714 aged 21. Sir Robert Shirley is also buried in the chancel area.

In the nave are the box pews which would have segregated the sexes as well as classes and we have a wonderfull ceiling painting of the Creation. The other ceiling paintings in the aisles were completed by another person probably later. The organ for the grand gallery at the west end of the nave was originally in the Hall next door, it was built in the 17th century but the maker is unknown. The ‘achievements’ above the chancel arch are the symbols of rank which may have decorated the coffin of Shirley family members. The font is 17th century and in the pews by the side of it in the south aisle you can see the names carved into the box pews from the young children who sat there all those years ago, probably the servants children or labourers children from the estate. 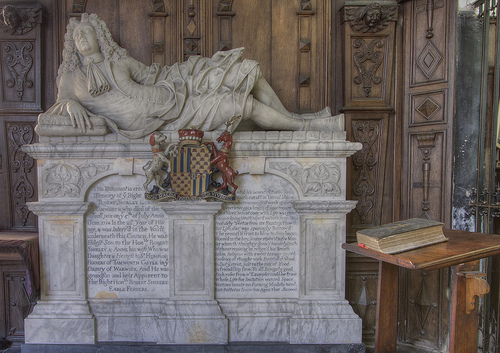 Staunton Harold Hall was used by the Army during World War II and afterwards the Hall was threatened with demolition. The Shirley’s could not afford the upkeep or repairs and in 1954 they sold the Hall to Leonard Cheshire Homes and the church was passed to the National Trust.
The stables are now the Ferrers Centre with craft shops and an excellent tea shop, there is also a garden centre and lots of walks though the estate. The church is open during most of the year apart from winter (see access info below) and is free entry (donations are gratefully accepted). There is a car-park by the garden centre and it is only a short walk around the house and lake to the church, wheelchair users will be fine here with access to the church allowed for disabled vehicles and a ramp into the church itself. 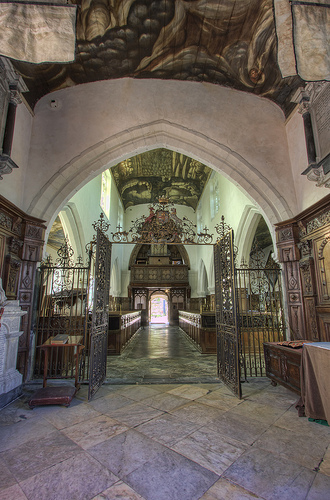 View from the chancel towards the west entrance

I would like to thank the National Trust at Calke for organising and allowing the photographs to be published on the website, they were a great help in getting permission and I would also like to thank the wardens on duty at the time who gave me so much valuable information.
Please visit this church, it is unique and it is special and set in a beautiful location. If you are going you could also visit another great church at Breedon-on-the-Hill nearby which also has some ‘Shirley’ monuments (it was used by them before they built Holy Trinity), it also has some unique Saxon carvings – with these two you would have a fine day out.