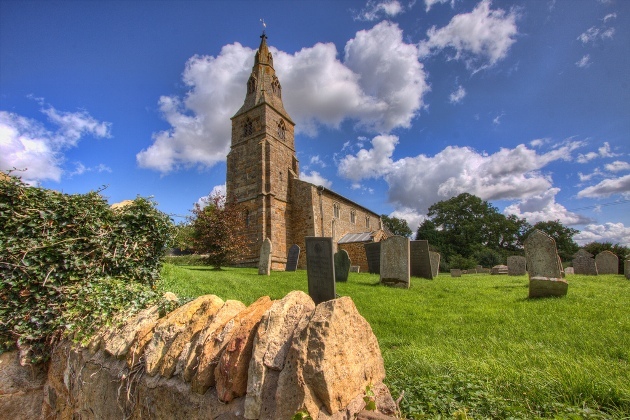 This is s real gem of a church in my humble opinion, it does not have any grand monuments or significant features of architectural interest – but what it does have is plenty of character. If you are a ‘church-crawler’ you will know what I mean. All churches are special places, but some have that ‘something’ extra that you realize quite soon into your visit or when you think back to the church in question – Wardley for me fits this category. Please note however that this church is now closed and may not be accessible (see update below). 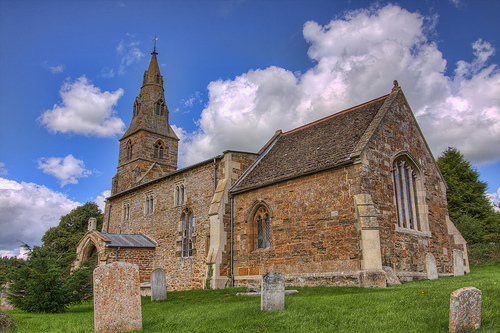 This Rutland village is just off the A47 as you climb ‘Wardley Hill’ less than a mile east from Allexton (another fine church) and 3 miles west from Uppingham. It is approximately 17 miles west of Leicester.

Wardley is not mentioned in the Domesday book but was a hamlet or ‘berewick’ of nearby Ridlington (this church is on the website and has more information). In the early 12th century it was held by a Richard Bassett and his wife Maud Ridel, they founded Launde Abbey in 1125 (on the website). Eventually there were three holdings in Wardley and various families are mentioned including the Murdac’s, De Montfort’s and De Boyville’s. Launde Abbey held the advowson for Wardley church which entitled them to place a priest there of their choosing until the Dissolution. The name of St Botolph is from an Anglo-Saxon saint who died circa 653AD, he was the patron saint of travellers and farmers, it is probable that an earlier church on the site would have had the same name. 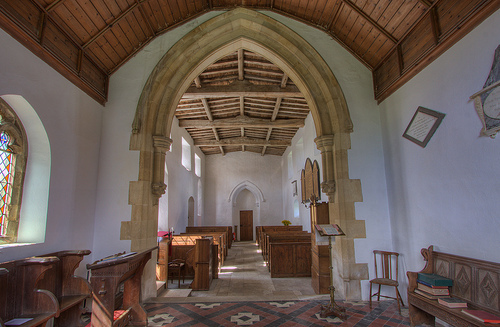 View to west tower and nave from chancel, a plain white church with much character

The church at Wardley consists of a west tower with broached spire (with two sets of lucarnes – dormer windows), nave and chancel. The 14th century south porch leads to a south doorway with a Norman arch built around 1175. The nave probably dates from 1200, although at the west end of the nave there are quoins which from their age could have been part of the earlier structure that stood on the site circa 1100. The windows in the south wall of the nave are 13th century (lancet window west of porch) and the other window with plate tracery dates from around 1250. The square window was added in the 16th century probably to add more light. The north side has a doorway (now blocked) and clerestory windows only. 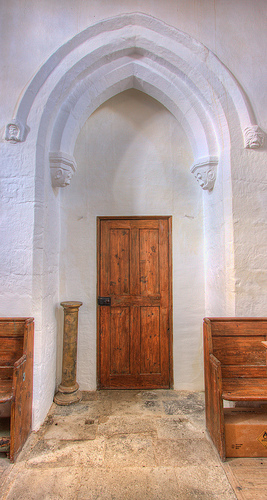 The tower and spire date from the 14th century and it contains two bells, one is dated 1677 and the other inscribed ‘Thoma’ was cast by Thomas Newcombe (II) of Leicester, c. 1560-80. The chancel was rebuilt by the Victorians in 1871. It has a aumbry in the north wall and a piscina in the south wall which are probably from the original 13th century chancel. The pews were added in the 19th century as well as the pulpit. The font opposite the south doorway is dated 1797 and has a octagonal bowl. 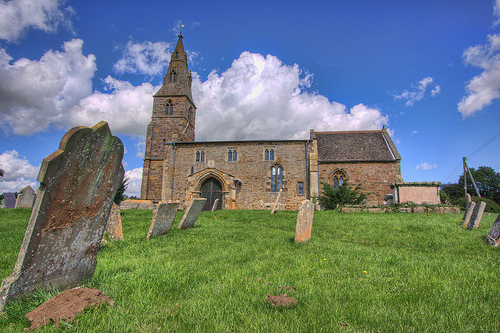 South view, the original nave roof-line can still be seen on west face of tower

At the west end of the nave are some interesting 14th century corbels, and on the north wall of the nave are Victorian boards with the Ten Commandments and prayers which may have been a reredo to the altar. The 19th century Gothic barrel organ by Bates of Ludgate Hill in London has three barrels, each with ten tunes.
This plain little white-washed church is worth a visit, and I think it is open at weekends so you can go inside. The village only consists of a few houses and parking is on the lane approaching the church. The nearest facilities would be in Uppingham.

June 2014 Update – Services are not now held at the church and Wardley church is closed, the future use of the building has not yet been decided. I will try to keep this site informed

The church at Wardley is now CLOSED. More information here.