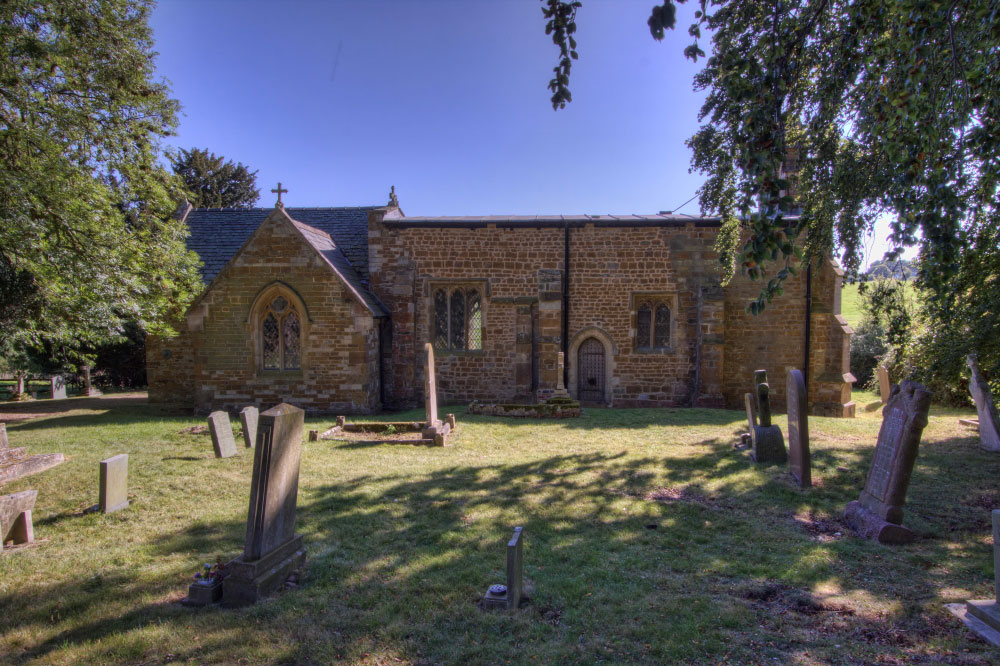 North view of church, there seems to have been some recent repairs to the nave wall

This quiet little village some 10 miles south-east of Leicester has never had a large population and like so many around east Leicestershire it has plenty of charm. The village is recorded in the Domesday Book and was thought to be part of a bequest to Burton Abbey (Staffs) in 1002-04. After the Norman Conquest there were three holdings in Shangton, those of the king, Robert de Vescy and Hugh de Grentemesnil who had the largest holding. In the 12th century it passed to the Earls of Leicester and then to the Duchy of Lancaster. It passed through many families until in 1560 the estate was sold to Francis Saunders lord of the manor of Welford. The Saunders held the estate until 1637 when it was sold for £12,225 to Sir John Isham of Lamport. They kept the estate until 1920 when it was sold for £22,500. Another part of the holding in 1663 passed to Sir Thomas Hazlerigg (of nearby Noseley Hall) who then sold it to the Palmers of Carlton Curlieu who still owned it in 1958 (not sure if they still do). 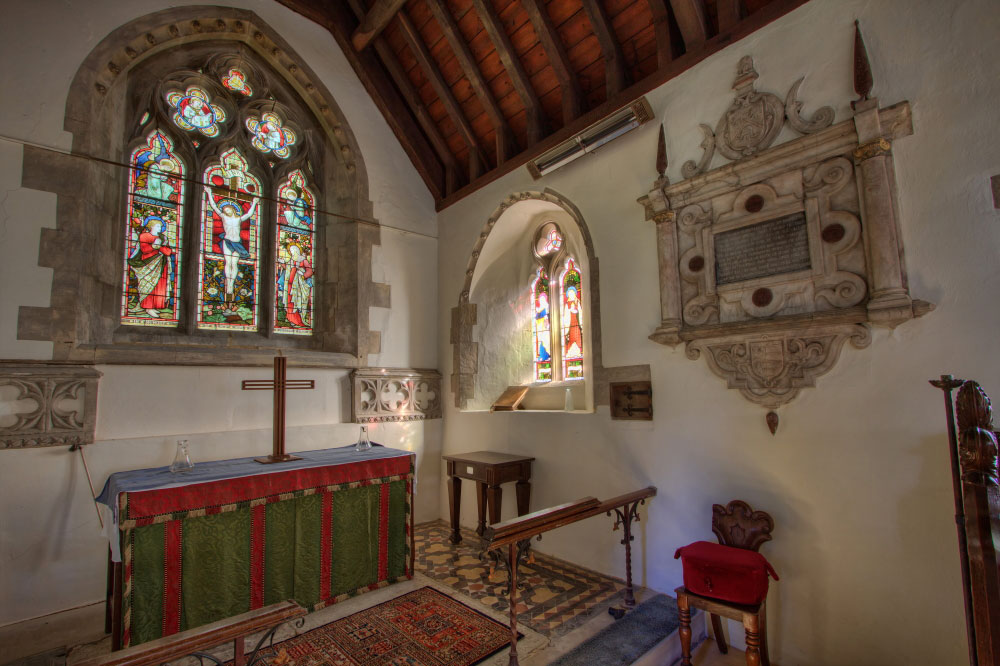 The population in Shangton decreased markedly in the 17th century, probably due to enclosure. In 1639 Francis Saunders was fined £160 for ‘depopulation and conversion of houses and lands’ in Shangton. The small church of St Nicholas stands to the south of the village overlooking a stream. There is some indication that south of the church on the other side of the stream the village continued but today this is all farmland. 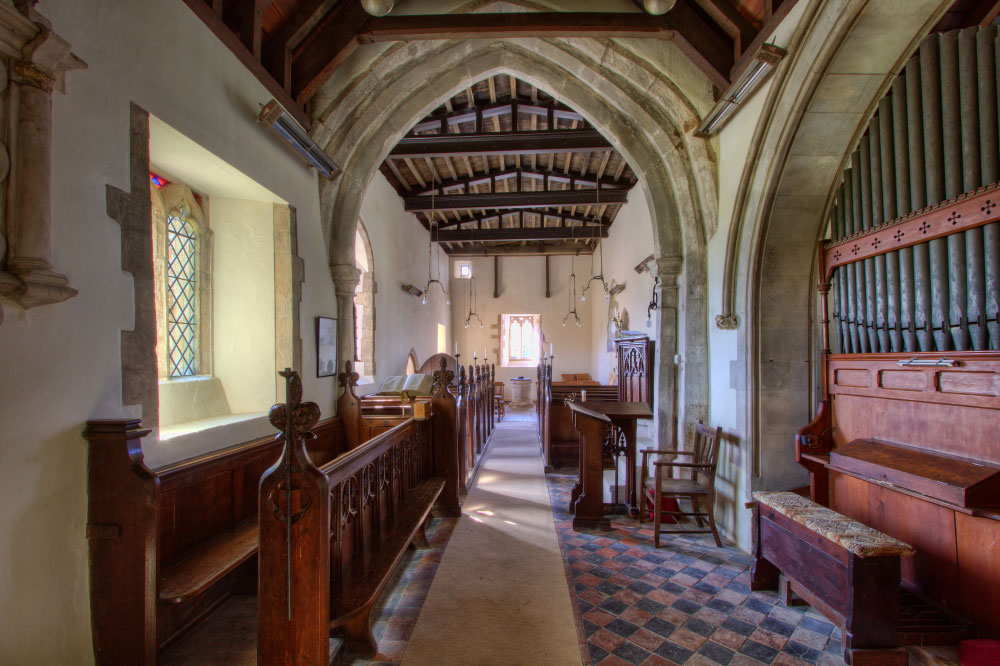 View from altar to nave and west end of church

The church consists of a chancel, north vestry, west bell tower, south porch and nave which date from the 13th century. The chancel probably dates from the 14th C except for the east end which was rebuilt in 1863. The chancel arch was rebuilt circa 1400, the nave windows range in date from the 14th century to around 1500. In the 17th and 18th centuries there are reports of damage caused by damp and in 1838 extensive repairs were undertaken in installing new drainage and at this time the belfry was cramped with iron bands. In 1874 the vestry was added and in 1920 & 1925 further church repairs were undertaken. The pews were removed in 1845 and replaced with open seating by Henry Goddard of Leicester. The pulpit dates from 1863. The font is 14th century with a Victorian cover. 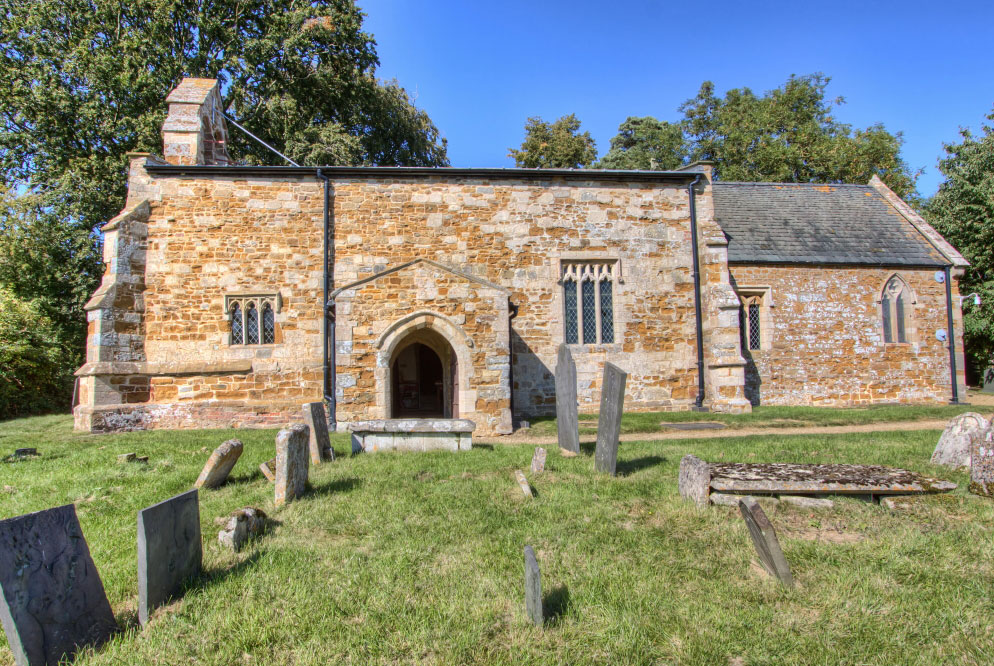 St Nicholas is set in a nice peaceful location and the south view from the church across the stream is very pretty – there are also good views back to the church from across the bridge that crosses the stream. There are no amenities in the village itself your nearest place for refreshments is Illston on the Hill or nearby Kibworth. There is a small car park by the church but I am not sure if this church is normally open – it was on my visit but this was the ‘Ride & Stride’ event. I have marked this not open for now until I make further enquiries.