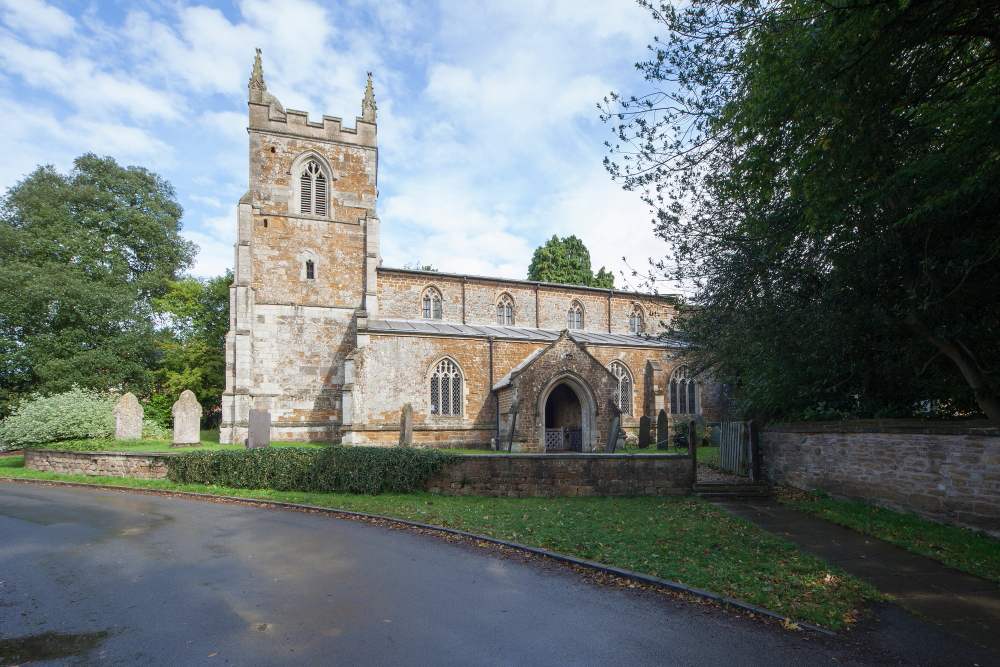 This small village lies just off the A47 and has a population of around 200. It is about ten miles from Leicester, a mile or so west of Tugby and east of Billesdon. The church is situated on a bend on Main street and is sited on the highest part of the village. It is mentioned in the Domesday Book. It is a pretty situated village and the church is no exception despite its Victorian rebuild (1860) but there are still items of interest. 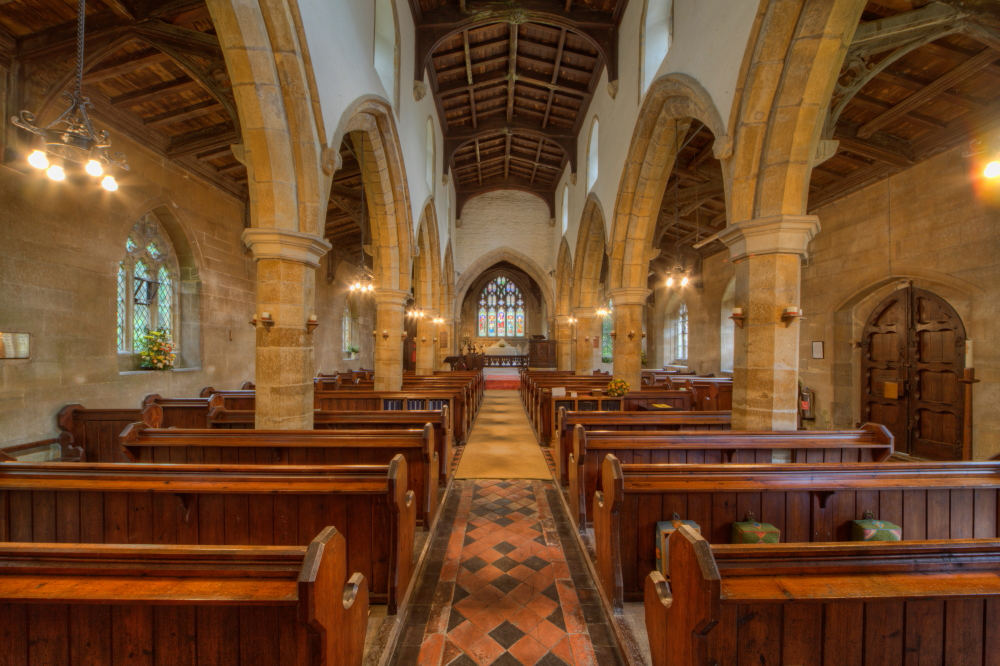 The church had a major Victorian restoration in 1860

The chancel arch dates to the 13th century as well as the pinnacled tower and north Chapel which houses several monuments – but more on them later. The aisles and chancel were rebuilt during W. Millican’s restoration of 1860. There are some ‘jumbled’ medieval glass in the east chapel window, it looks like someone has haphazardly tried to put them back in in no particular order. There is reportedly a representation of the nearby Hall and the chapel has a doorway which would have led to the Hall. 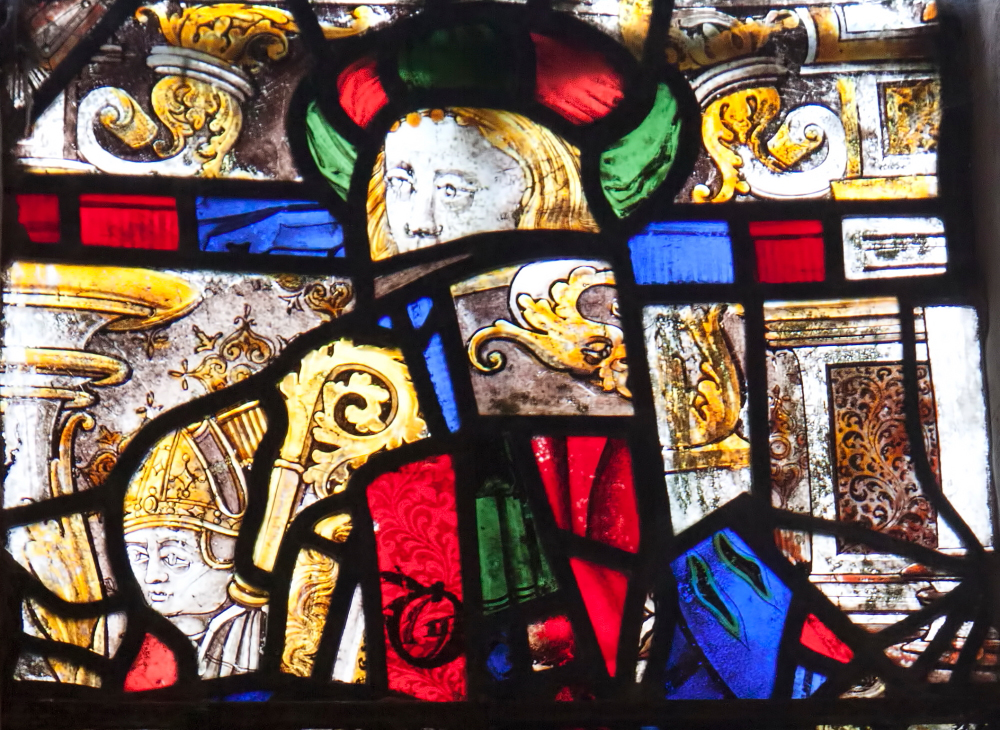 Some of the medieval glass replaced in the chapel east window

Skeffington gave its name to a notable family who lived there. Some of the more famous were Sir William Skeffington who became Master of the Ordnance for Henry VIII and who battered down the walls of Maynooth Castle in Ireland with cannon. He married a Digby of Kettleby and their son, Sir Leonard Skeffington became Lieutenant of the Tower of London. He devised a contraption of torture, the ‘Skevington maiden’ which pulled the head and feet together. 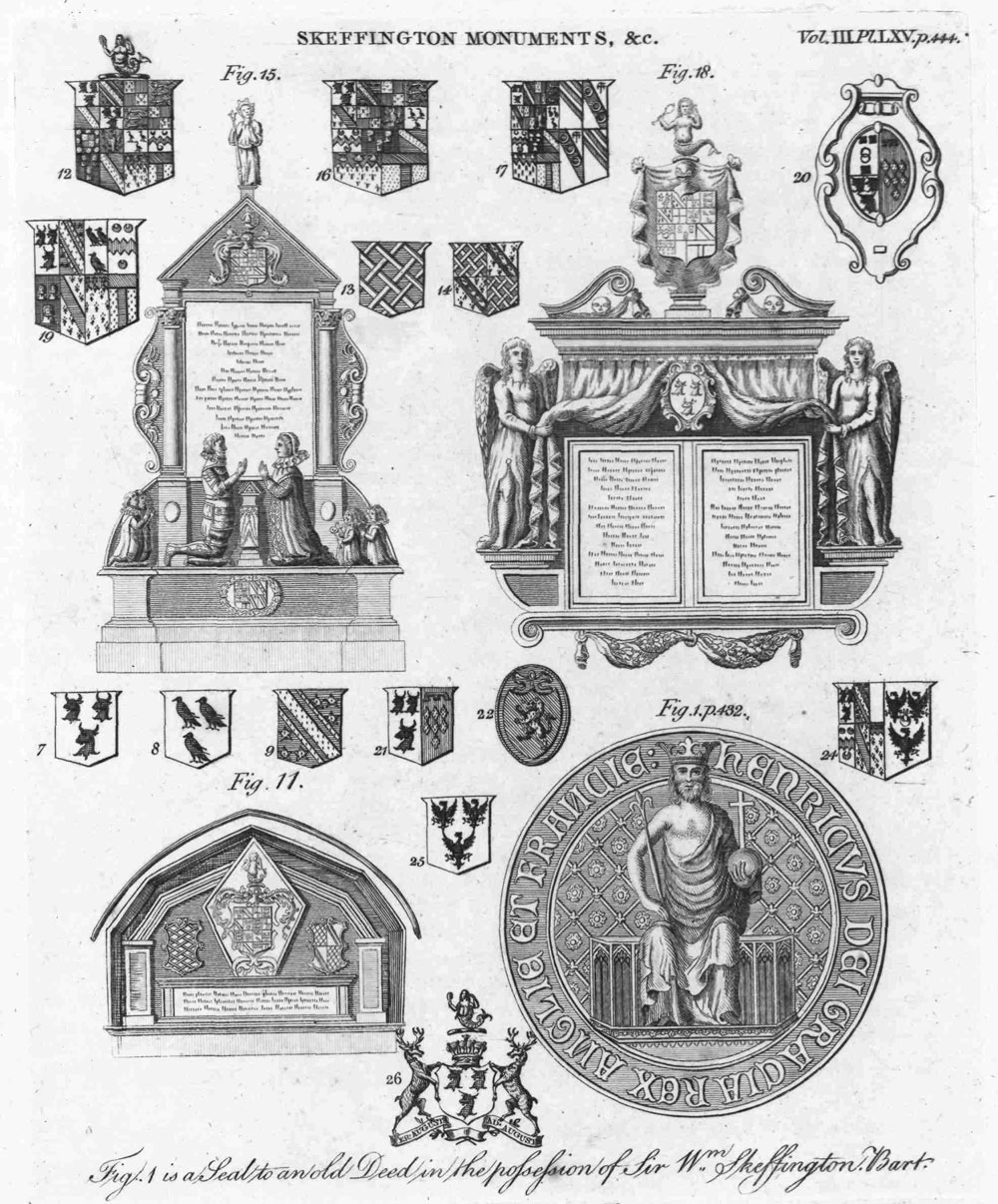 The monuments as recorded late in 18th Century (Nichols) the large upper left monument has been broken up.

During Elizabeth I reign, Sir Thomas Skeffington as High Sheriff of the County raised 12,530 men in defence of the country against the Armada. Two thousand were sent to Tilbury to guard the docks whilst the rest were equipped with weapons and sent home to train. His ‘dismembered’ monument is in the chapel under the recessed arch, in the late 1790’s the monument was still whole as can been seen in the engraving above. You can still see some traces of paint on the alabaster figures, they look quite sad now and J. B Firth gives a very good description in the Highways and Byways in Leicestershire (1925);

“The alabaster figures knelt casually on the floor, and the smaller ones were set down like so many damaged dolls.” It is a shame that the original monument is not still in situ, it may have been damaged during the Victorian restoration but thankfully they are still in the same place that J.B. Firth saw them 90 years ago. 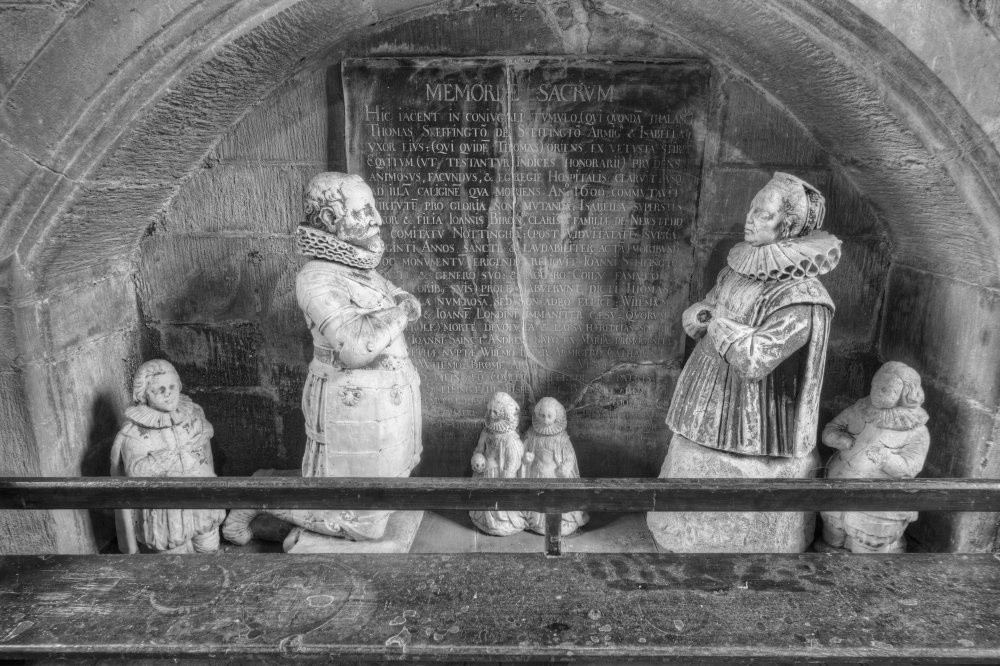 The remains of the monument under the recessed arch. Hands are now gone and he has lost some hair…

In 1605 Sir William Skeffington died without issue, he left a widow, a brother (who inherited the estate) and four sisters. Sir William’s beautiful widow married her groom, Michael Bray which of course led to family arguments. Into the courts of Westminster they went, and a settlement seemed near when it was adjourned to the Hoop Tavern. There John Bray is reported to have ran through John Skeffington with his sword, but not before John had done the same. They both died from their wounds, so the last direct descendant came to a violent end in 1613.

The other main monument is to Sir John Skeffington who died in 1651. With two angels holding back curtains to show his epitaph. In the floor we have several slabs, one or two badly broken and worn. One shows a ‘Skeffington’ with his wife and thirteen children. 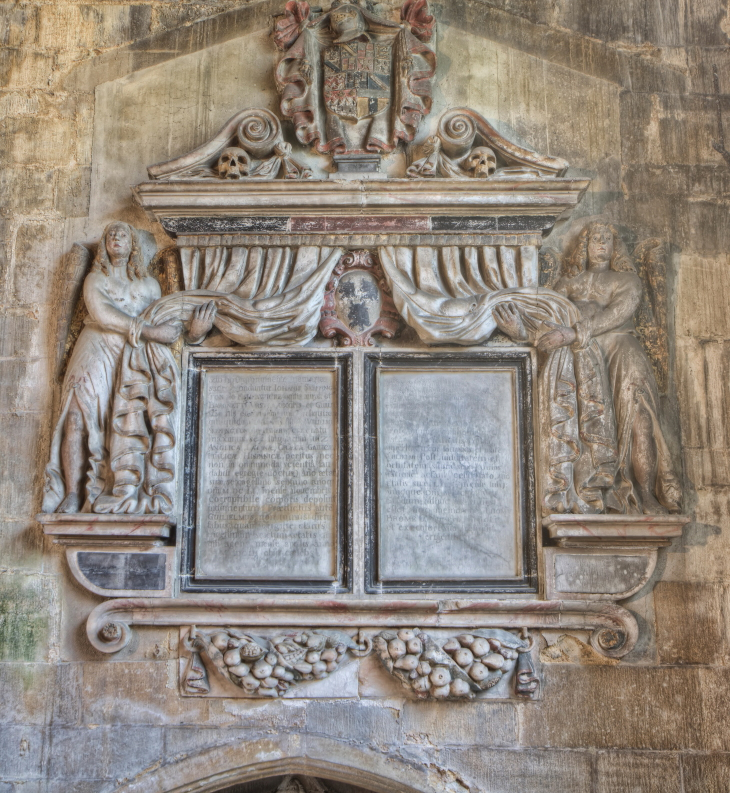 Monument to John Skeffington in Chapel

The estate passed into another branch of the family for 150 years before passing to an Irishman named Farrell who took the name of Skeffington in 1786 and was made a Baronet. Apparently he pulled down 21 houses in the village to improve the view from the Hall, this included some buildings of worth including an ancient mansion. His spending outstripped the estate’s returns and in 1814 the estate and works of art were sold off. His son Sir Lumley St. George Skeffington (now thats a name) inherited only the title. He had been an actor at school and went on to write several plays, one of which “The Sleeping Beauty” became successful at Drury Lane in 1806. When all his money had gone in later years he became a “tall spare figure, vain of his appearance and his dress was carried to foppish extreme”. A real dandy by all accounts he liked to wear a “pea green coat and rich rouge pot”. In later years it was reported he came into an estate of around £600 per year and lived in style and comfort in London and was known as “Old Skeff” to his acquaintances. 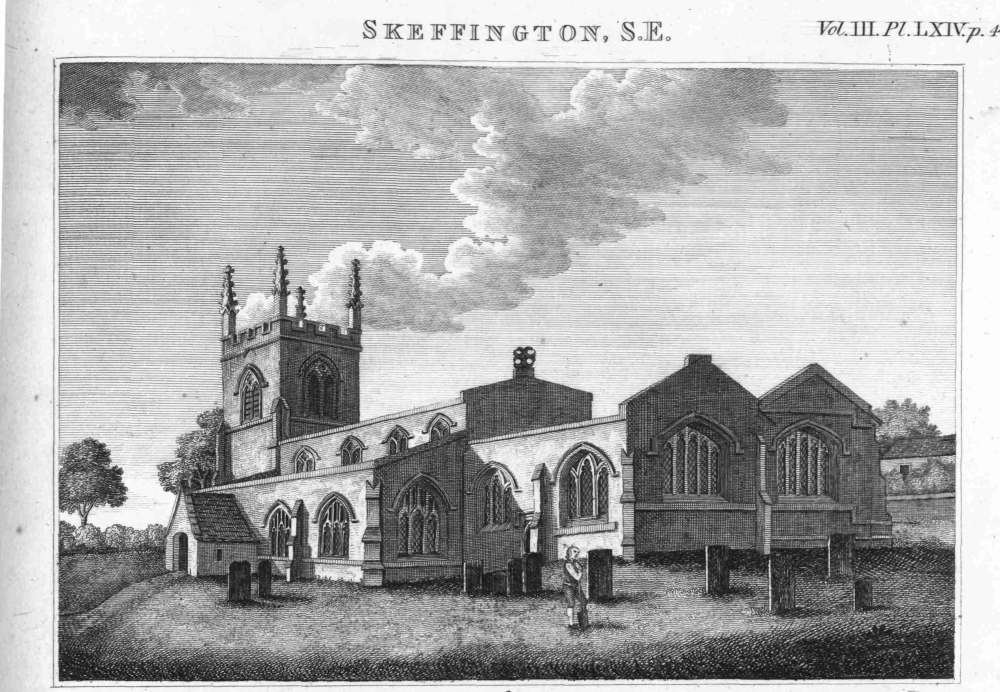 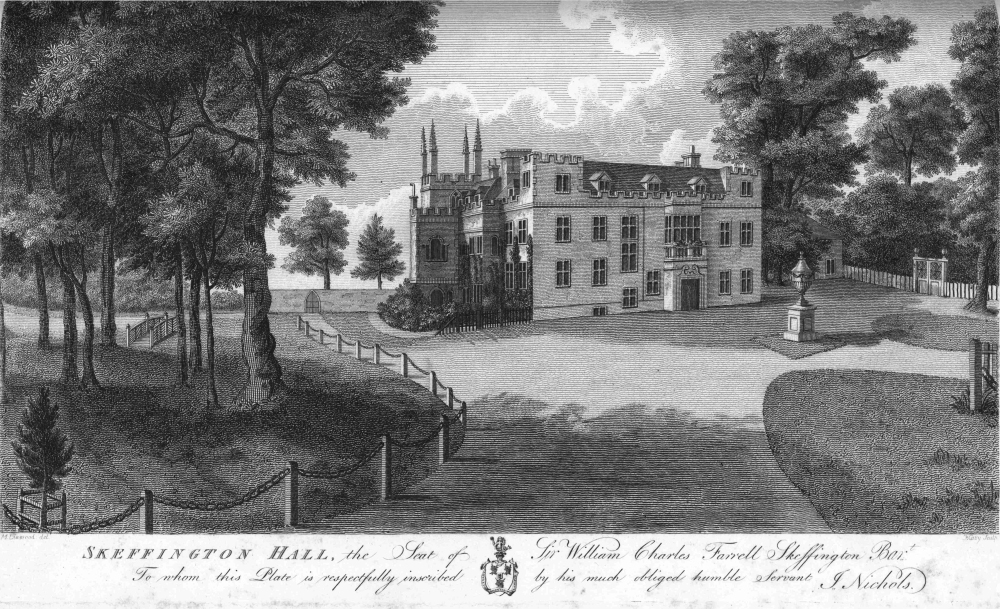 The Hall is situated to the north of the church, an attractive building with Tudor features including a fine drawing room. The oldest part of the house dates to around 1450 with later additions in the 17th century. Alterations took place in 1810, 1843 and 1850. It is presently ‘under offer’ after coming onto the market (March 2015). 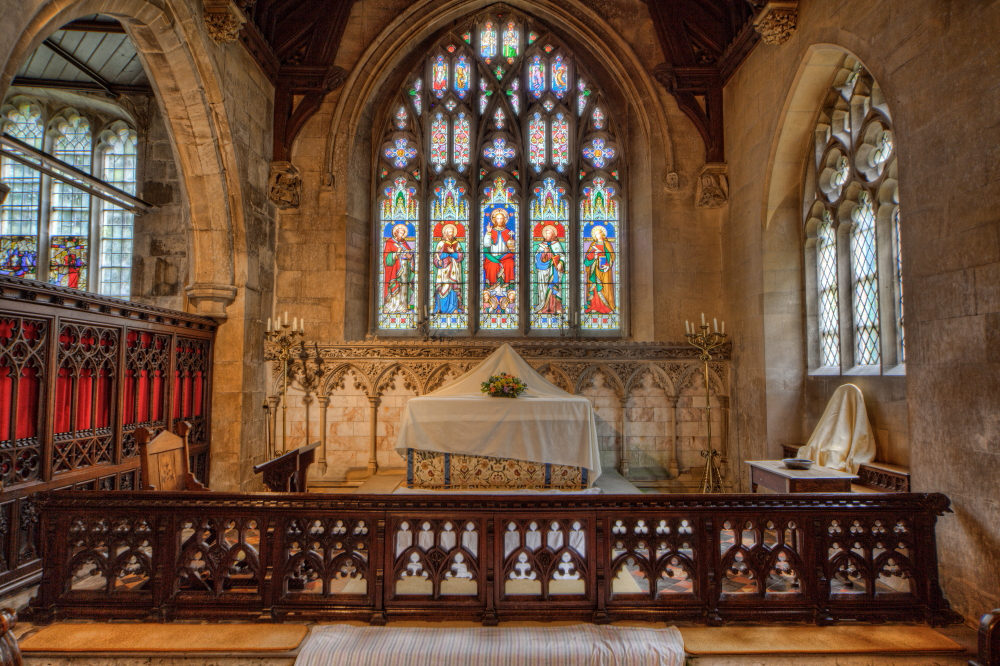 The chancel restored by Victorians in 1860

The church at Skeffington has some interesting monuments, they are not of very high quality but they are closely related to the same name family who lived next door in the hall for over 400 years. The church is locked and there are no facilities in the village but there are at either Tugby or Billesdon. There is a small car park by the tower.