Situated some 10 miles south-east of Leicester and 6 miles north-west of Market Harborough the village of Saddington has a population of around 250 and its nearest neighbour is Fleckney to the north.
In 1066 the village belonged to Queen Edith, the wife of Edward the Confessor, after her death in 1075 the property passed to William I. The manor then passed through many hands and families (you can read more on this via the link to the excellent British History site at bottom and their entry for Saddington). By early in the 16th century the manor of Saddington passed to Sir Richard Sacheverill, Knight and in 1531 it passed to his nephews John and William Finderne and Henry, son of Thomas Sacheverill. In 1619 it was owned by Sir John Bale and by the time of the enclosure in 1770, it was owned by William Wollaston Esquire. Wollaston sold the manor to a Mr Evans of Nottingham in 1798 and but by 1846 the Lady of the Manor was Mrs Dorothy Evans. In 1877 it was in the hands of her trustee but shortly after the manorial rights seem to have lapsed. 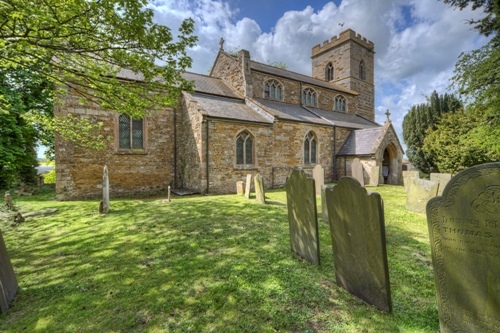 I should mention Saddington reservoir which can be seen from the south side of St Helens. The reservoir was built between 1793-1797 in a natural hollow and was fed from Laughton and Saddington brooks. It was built to supply water to the nearby Grand Union Canal and is the second oldest in the county. The reservoir covers around 60 acres and its waters supply the half a mile long Fleckney tunnel to the north which was built in 1794. 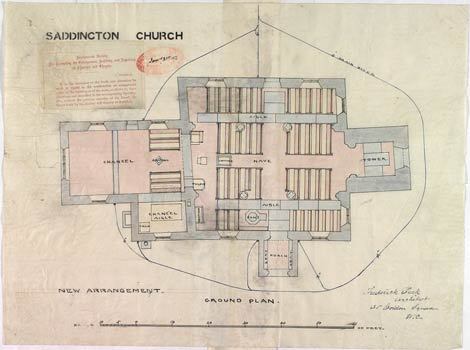 St Helens consists of a west tower,nave, north and south aisles and north porch. The church underwent a major restoration in 1872-73 and the earliest parts of the church still remaining are the 13th century south arcade and the tower although later additions to the tower were added in the 15th century as well as the clerestory. In 1707 the tower was rebuilt (dated stone on north battlements of tower) after the spire was removed. The font dates from the 14th century with its octagonal broach stopped base. In the 17th century the church was reported as being in poor condition being damp and unpainted. In 1662 the chancel was reported to be in ruins apparently caused by fire and intruders. By 1777 the church was in better condition and ongoing repairs were carried out through to 1836. 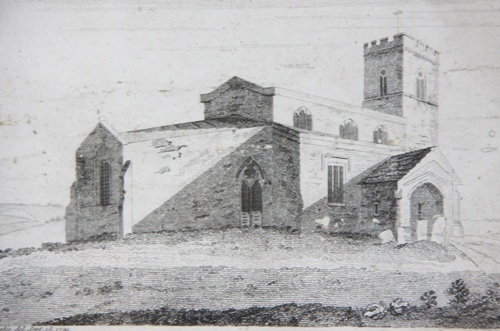 The restoration of 1872-3, undertaken by Frederick Peck, gave an early-14th-century appearance to the exterior by the installation of new windows throughout the church; all have reticulated tracery. An exception was the east window in the chancel, of Perpendicular style; this had been inserted by Goddards of Leicester in 1864. Numerous fragments of early worked stone are incorporated into the chancel and aisles to form part of the external rubble walling. The general patchiness of this work suggests a re-facing rather than a rebuilding by Peck. Less disturbed walling of medieval character occurs at the east end of the chancel and south aisle, and at the west end of the north aisle. The organ chamber was added and the north porch was replaced during the restoration and it seems to have been at this time too that the south porch was demolished, as was the gallery which existed in the late 18th century. Further minor repairs were carried out in 1908. The church recently has installed a modern kitchen and serving area and toilets are installed in the base of the tower. 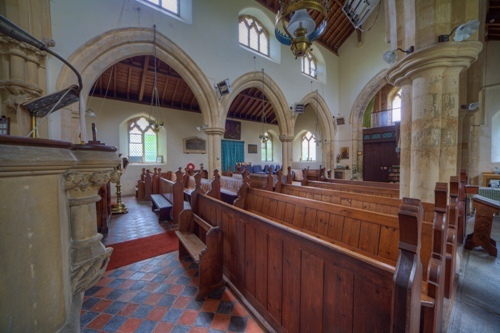 Saddington is a pretty village and the church although heavily restored has some nice features and is a well proportioned building. The churchyard is fine although the southern area overlooking the reservoir is rather overgrown. The church is usually locked outside of normal services but the good news is that they serve summer teas on a Sunday afternoon from 15:00-17:00 from  late June  until September.  There are other facilities in the village and there are some good walks around the nearby reservoir.