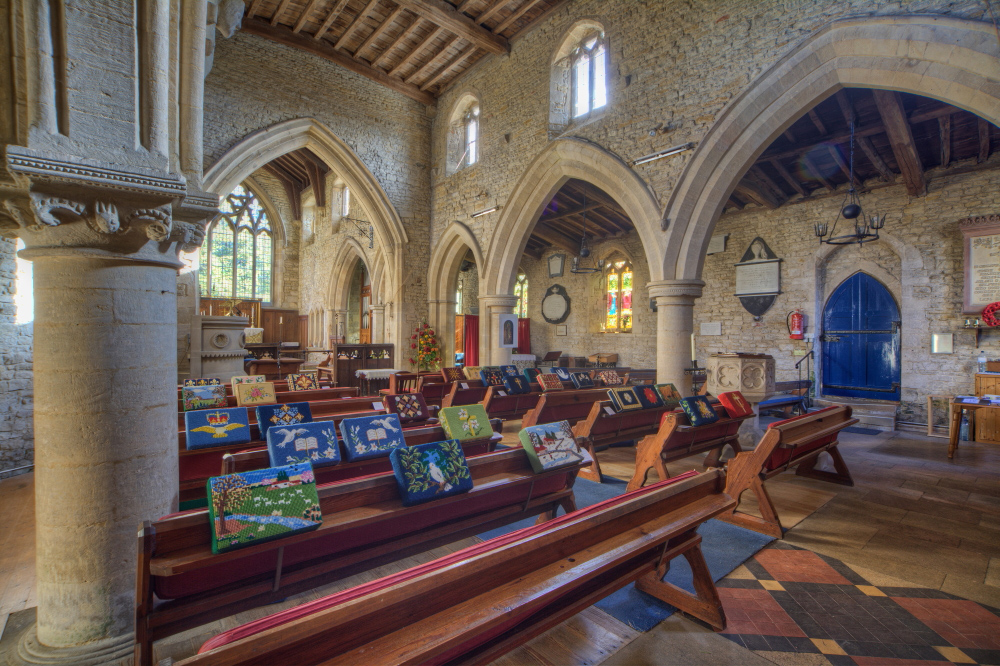 Seperated from North Luffenham by the River Chater the pleasant village of South Luffenham has a population of less than 500 and is set a few miles south of Rutland Water. The village is split into two by a tributary of the River Chater with the church on the south side by a small green. In 1086 the village was part of the manor of Barrowden and it passed to the Earls of Warwick. The Greenham family of Ketton owned a manor in South Luffenham which they probably came into in 1254, they passed this to Sir John Digby in 1496. Sir John had been knighted by Henry VII after the Battle of Bosworth and he also attended Calais in 1513 with Henry VIII. He also served as Sheriff of Rutland, Warwick and Leicester. 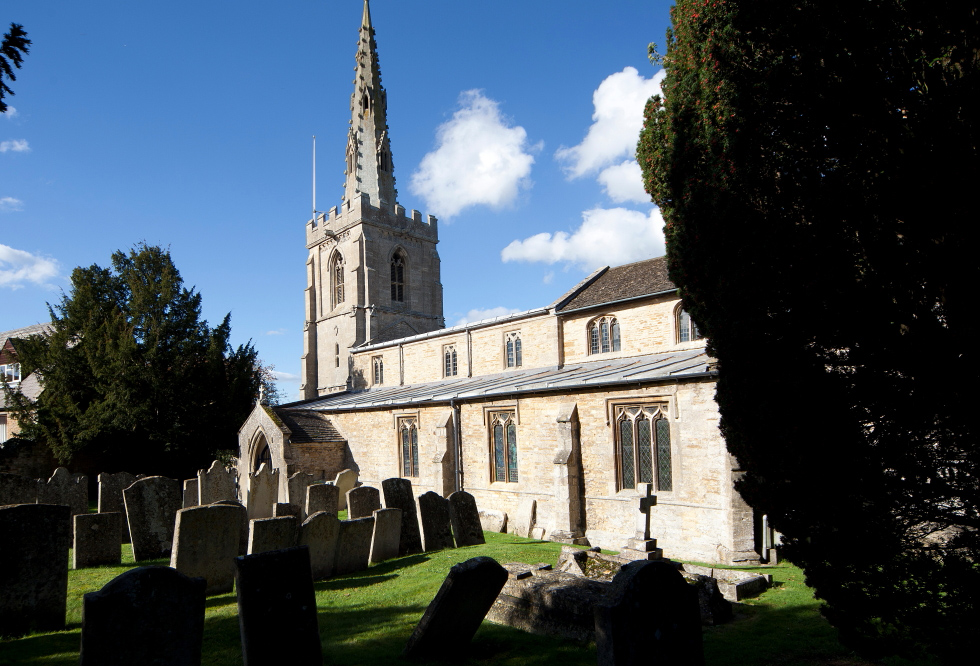 View from the south of the crocketed spire and ashlar tower.

By 1531 Sir John and his wife Sanchia had settled the manor on himself and his second son Simon Digby. Sir John passed away in May 1533, Sanchia died earlier in the same month and the manor passed to Simon. In 1568 the Digby family held both the manors of North & South Luffenham, but in 1640 the estate and Hall was delivered by the Sheriff to John Turner for debt’s due to him by a John Digby.
The church of St Mary consists of a ashlar west tower with a fantastic detailed crocketed spire. It also has a nave, chancel, south chapel, north & south aisles and south porch. Unusually the nave and chancel both have clerestories.
The original two cell structure (nave and small chancel) was enlarged in 1190-1200 by the addition of the north aisle. The two beautiful arcades date from this period and are especially fine with carved heads and nail head decoration. Later, the south aisle was added in the first half of the 13th century with their pointed arches. In the 14th century the church underwent some major rebuilding which it has retained to do this day. Both aisles were rebuilt, and the southern aisle widened and extended to form the chapel. At the same time the porch and tower were added and the nave clerestory installed. In the 15th century the chancel had new windows and the clerestory was added.

The three tiered tower and recessed spire are worthy of further examination. The pointed bell windows are attractive but the crocketed spire with its many gabled openings is very fine – take a pair of binoculars with you to really get a good view. In fact its very useful to keep a pair in the car for ‘church crawling’. The font dates to the 14th century and in the chancel there is a table tomb of the same period of a man in civil costume. The western panel contains a shield of the arms of Culpepper. 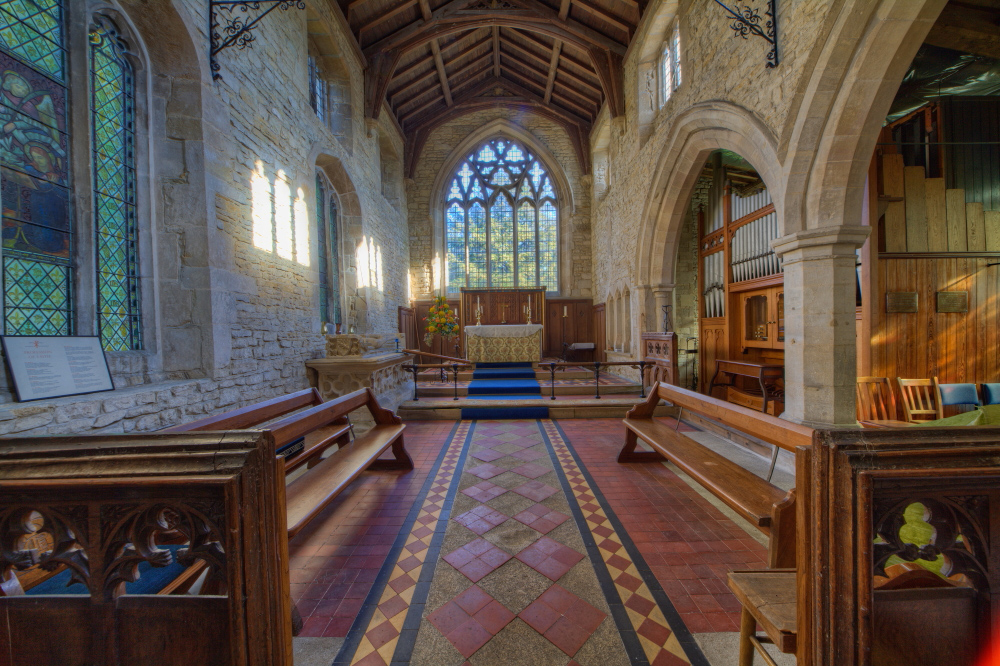 The chancel was restored in 1850. Further in 1861 under G. E. Street (ran into him somewhere before) there was an extensive restoration of most of the church which resulted in the plaster being removed from the walls (and probably any medieval paintings!), the tower arch opened up and the chancel floor raised. In all it has preserved many features, but the loss of the plaster and the ugly pulpit are not good in my opinion. Although visiting the churches and finding out about the actual build and its features is interesting, it is the human stories that I find fascinating and South Luffenham church has a couple of those. 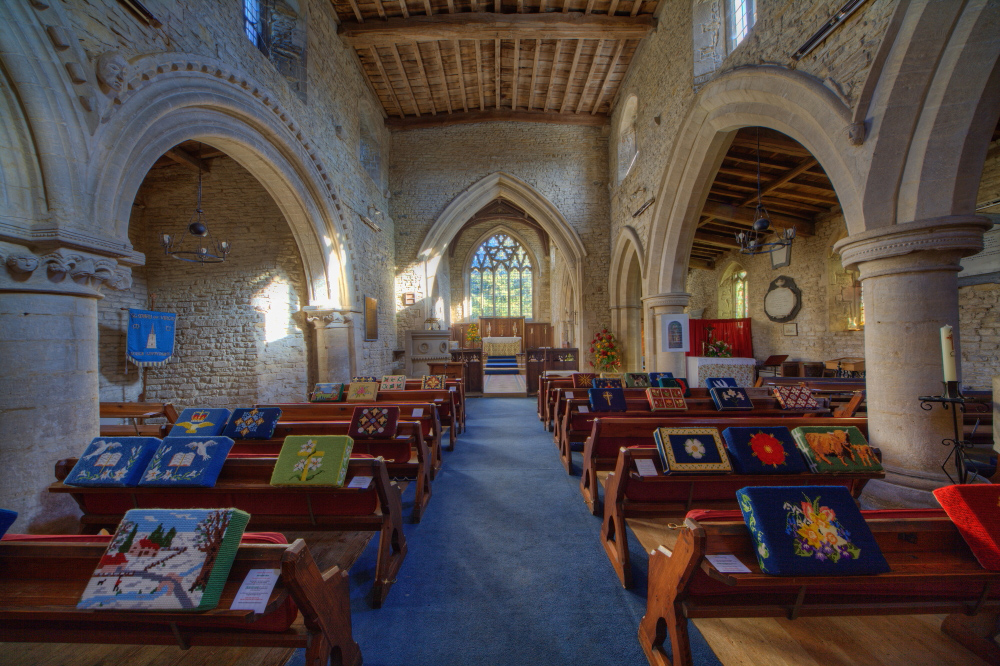 View of nave to chancel, with the fine carved north archeway

In the chapel at the west end is a floor slab to Rose Boswell, daughter of Edward Boswell ‘King of the Gypsies’. He and his daughter with their camp arrived at Christmas in 1793 and set up their camp at the ‘Follies’ near to Foster’s Bridge. Rose became seriously ill with consumption (tuberculosis) and although the gypsies were to move on they delayed their departure for another two months and stayed on the cold heath. She eventually died in February 1794, the churchwardens would not let a ‘non christian’ be buried in their churchyard but Rev. Bateman finally overruled the parishioners and she was buried in the south aisle. Later a marble slab appeared and was placed over her remains subscribed by the many gypsies who came to express their sympathy for the ‘Princess Rose’.

The slab is still there are in the church with the following faint epitaph;
“In memory of Rose Boswell, daughter of Edward and Sarah Boswell, who died February 19th, 1794, aged 17 years. What grief can vent this loss, or praises tell, how much, how good, how beautiful she fell.”
There are also anecdotes of tunnels running from the church to the stream and also from the site of the Old Hall to the church. It is reported that in a 1912 a villager entered one of the tunnels to rescue a dog, the tunnel was round 5 feet high, ten feet down and built of stone. Perhaps it’s time to call in Tony Robinson!
South Luffenham is a church full of character and great architecture. Definitely worth a trip out, and as there are so many churches open in Rutland (Leicestershire take note) you could make a day of it.