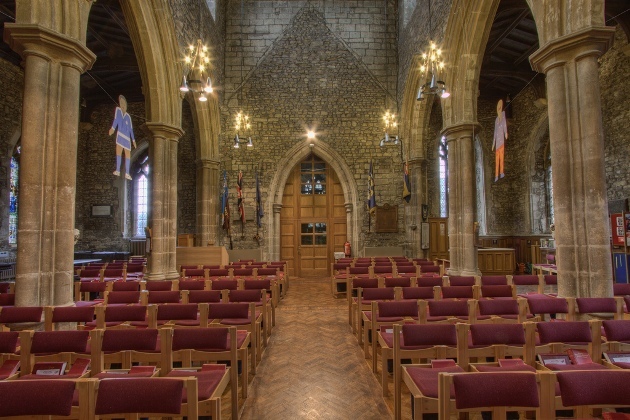 View to west tower, the earlier roof-line is very easy to see.

Oadby has two churches in the parish, one is the modern St Paul’s which is already on the website and St Peter’s is the original medieval building which has been here since the 1300’s and most likely replaced an earlier structure.
The town of Oadby is split in two by the busy A6 and is a suburb of Leicester to the south-east. The population of around 23,000 has grown due to the large scale housing developments that constitute most of the town and have been built in the 20th century. 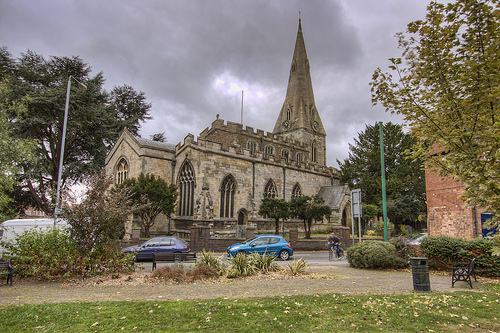 View of north side and the high crenellated clerestory

There has been some evidence of Anglian burials in the vicinity that were found in around 1760 near or on Brocks Hill. It is believed that Oadby has been occupied since around 550AD probably by first by the Angles and then by the Danes who ruled the area to around 920AD. The name Oadby has the usual Danish ‘by’ which means village or settlement, but the name has gone through several changes since 1086 when it was recorded as Aldebi in the Domesday Book and belonged to Hugh de Grandmesnil. The name changed to Oladebi, Outherby, Onderby and finally Oadby. 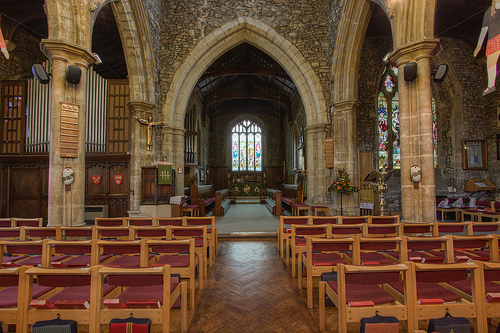 Modern seating in the nave area looking towards the nave.

The church of St Peter’s consists of a west tower with broached spire, nave, north and south aisles, chancel and vestry. The main fabric of the church dates from around 1300-1330 this includes the tower and north aisle. The perpendicular clerestory was added later and is set quite high against the tower. Also on the west wall of the tower inside can clearly be seen the original roof line before the clerestory was added. This also extends well below the heads of the arcade arches and shows how steep the original roof was. Another interesting point is the two different stone being used, one being dressed or faced stone whilst the other looks like rubble infill on the west side of the tower. The chancel area was rebuilt and restored by Goddard & Paget in 1887-88, at the same time the vestry was added. 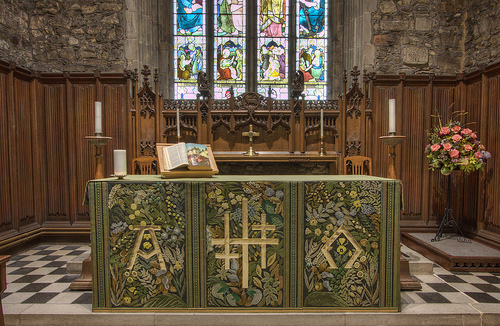 The altar and chancel area.

The church at Oadby sits on a rise but is now surrounded by some busy roads and buildings. I found the church very attractive with its unusual broached spire with the four lucarnes and some interesting panels and decoration on the tower. It was difficult to get a quality picture from the outside even with a wide angle lens but there was a small ‘garden’ on the north side where I managed a few. The inside has great character and and has some fine features. The pews have been removed and more flexible seating installed which gives the church a less restricted space.
Parking is a problem around the church although there are some paid car parks nearby. There are plenty of facilities in Oadby even though I do not particularly find the town very attractive.