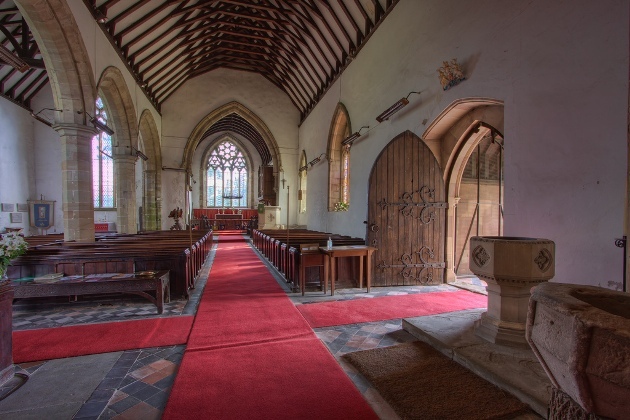 The village lies to the west of Leicester which is some 11 miles away. Its nearest neighbours are Barlestone to the south and Ibstock to the north, the population was around 520 people in the 2001 census.

All Saints church at Nailstone dates from the 13th & 14th centuries. This large light spacious church has the same characteristics of other Leicestershire churches in having a north aisle which is nearly as large as the nave. Broughton Astley and Thurlaston (both on this website) also have this feature. It has a large 14th C tower and a fine 117 foot broached spire that can be seen for many miles. There were pinnacles at the top of the tower but these were removed for safety reasons. Two can be seen at the base of the tower. 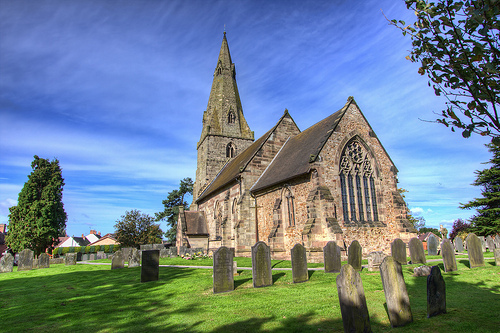 View from south-east, the grand broached spire is a fine feature of this church

Inside the west arch has a very grand quadruple-chamfered arch which leads into the nave area, the base of the tower is now used as a vestry. The church also has a south aisle, nave, and chancel which is probably the oldest part of the building with its two blocked lancet windows dating from the 13th century. The 14th century north aisle with its four bays is as stated nearly as large as the nave, there is a blocked north doorway, and at the east end a chapel. 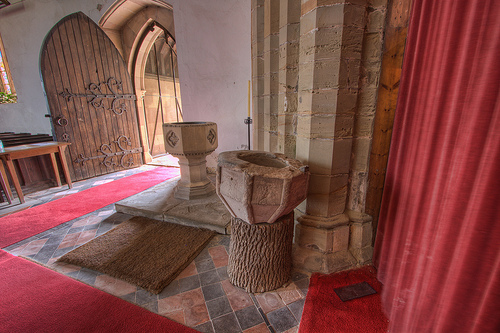 The medieval font now sites on a log, the Victorian one is behind.

The church was partly rebuilt and restored in 1852-53 by Ewan Christian of London. The rainwater heads bear the date of 1852, and these were a common addition by Mr Christian, a fortunate name for a church architect. The work was completed by Messrs Broadbent & Hawley of Leicester and the church was re-opened on 9th June 1853. The main funds for the renovation were donated by Lord Howe who contributed £1,250, the total cost was a round £1,700. The pulpit, wooden communion rails, southern porch probably date from the time as well as the roofs which were all redone. 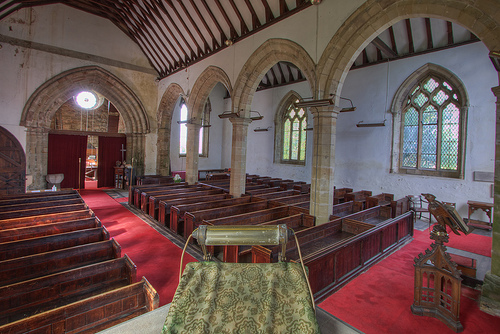 From the pulpit across the nave and north aisle

The organ dates from 1844 and was another gift from Lord Howe. The oak eagle lectern was carved out of a beam from St Mary’s church in Leicester, it was presented to the church in 1885. The medieval font is still present but not now used it probably dates from the 13th century and is now placed on a log as it is missing its base. The Victorian font is by the side near the south doorway. 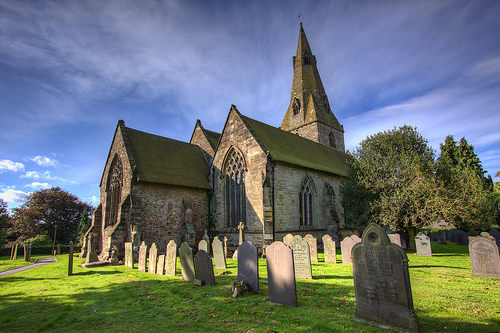 Fine picture of the north aisle and chancel, the spire can be seen for many miles

There is a badly worn tomb slab at the east end of the north aisle. The photograph I have as a thumbnail (click on it and a larger image will open) has been heavily processed so at least you can see some outline on the slab. The slab was originally on top of a altar tomb but was rescued by a rector after being underneath a heating stove. The slab was for a Thomas Corbett who died in 1586. He served four royals as Sergeant of the Pantry under Henry VIII, Edward VI, Mary and Elizabeth I. He lived until he was 94 and had 21 children by his two wives – quite an achievement! 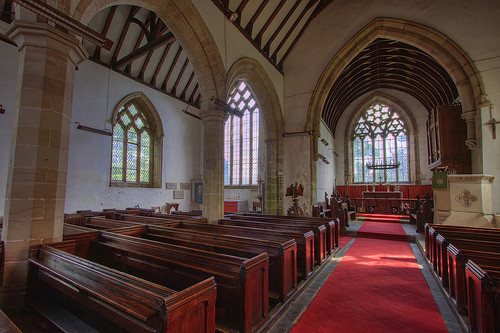 The church itself with its grand tower and broached spire is a fine building. The church is usually locked but they do have events to raise funds etc and the church will be open on these days as well as others (check the events diary on the church directory page). There is parking outside and there is a public house in the village.

Wynne
My extended family were very much connected to this beautiful Church. Well I think it is this one ! I believe that there were 7 Jones’s and the organist in the late 1880’s and 1900’s