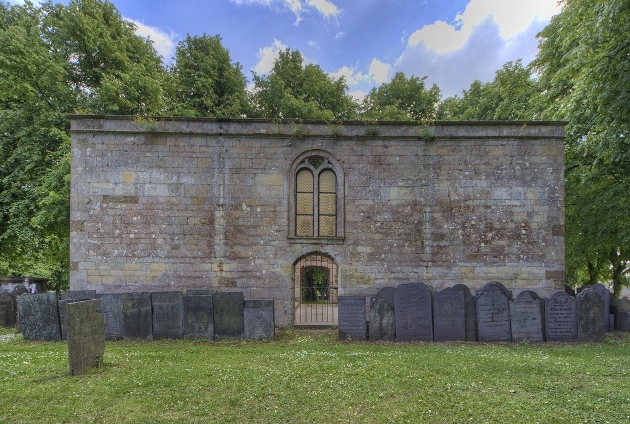 North view of the ruined church

The ruined church of St Mary in Arden is towards the east of the town centre just a couple of minutes drive away. There is not much to see now but this church was in fact the main church of the town but formerly was in the parish of Great Bowden. The church was first mentioned in 1220 when it had a resident chaplain which the chapel in Market Harborough (St Dionysius) was also dependent on. During the later Middle Ages there is no mention of clergy at St. Mary’s, which may have been served from Great Bowden or Harborough. After the appropriation of Great Bowden it evidently had a separate curate, as one is mentioned in 1574 and subsequently. In 1613 the cure of St. Mary’s was united with that of Harborough, partly at least because of scandalous conduct by the curates (no I do not have any more information!). 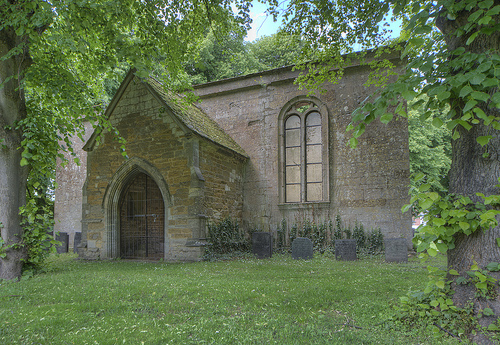 The inhabitants had been buried at St Mary’s since the 15th century as St Dionysius had no churchyard. After 1614 burials continued although the church now became more of a mortuary chapel. The medieval church consisted of a nave, chancel, south aisle, porch and steeple. Only parts of the porch relate to the original building which would have led into the south aisle through the remaining 12th century Norman doorway. The church was in need of repair during the 16th century and the church was not well maintained after the union with Harborough. An earthquake in 1625 damaged the steeple and the church fell quickly into ruin and disuse. By 1662 the lead had been removed and in 1682 it was said the church had been ruinous for twenty years. There is also a report from Nicholls that the spire collapsed into the church around 1650. 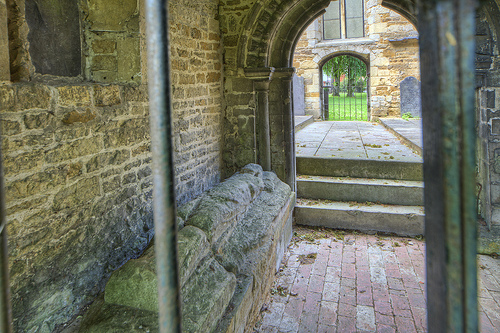 The 14th century porch, the 12th century doorway and the 15th century tomb

In 1692 it was decided to rebuild the church and 1694 the chapel was completed covering the previous south aisle. The rest of the church was removed at this time and carted away as ‘rubbish’ in 1694 although much of the stone was reused from the medieval church. The chapel was faced with limestone and comprised a rectangular room and south porch. There was also a north entrance and the roof was lead covered. By the end of the 18th century the building was again in a poor state, the floor was unpaved and glass was missing from the windows. In 1925 the chapel was repaired and refitted but after WWII the fittings were removed and in 1950 the lead from the roof was sold, by 1958 the building was roofless and derelict. 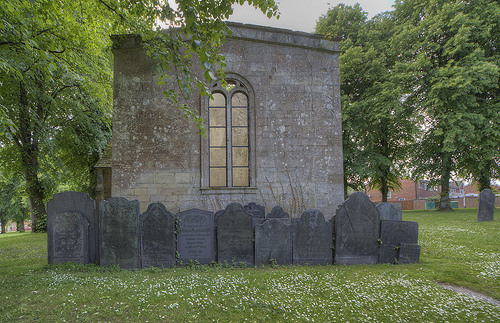 The chapel sits in a large churchyard but most of the remaining headstones are now around the remains of the building, there is a stone effigy (mutilated) in the south porch which originally would have been in the medieval church. 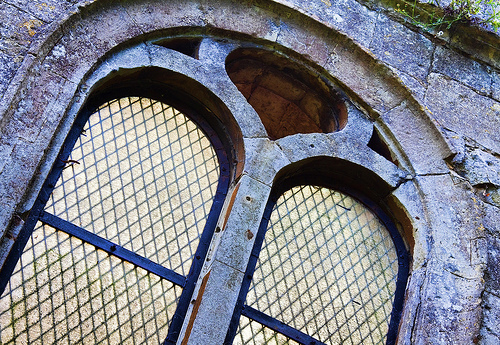 The 17th century windows in the chapel.

St Mary In Arden is sited on high ground, although with the modern buildings around the church this is hard to realize now. It would have overlooked Market Harborough originally but it fell into disuse due to St Dionysius being in the centre of the town. The ruins are locked although you walk around the outside and peer inside the open doorways. It is rather a sad place and it is hard to believe that the chapel could not have been saved in the 1950’s when it was finally made derelict. If you are in the area it is worth a visit to walk around the building.

david johnson
The cure of St Mary’s was united with that of St Dionysius in part because St Mary’s was the scene of many clandestine marriages.

Pam Abbott
A Service is still held here every Easter Saturday at 6.00pm, in accordance with the bequest of William Hubbard, whose gravestone is one of the few remaining in situ. In 1786 he left a rent-charge of one guinea to the church provided that ‘the Harborough singers’ sang the Easter hymn over his grave every year on Easter eve. The choir from St Dinnysius church has continued this unbroken tradition for (at the time of writing) the last 225 years.

Rosalind Willatts
The churyard was closed in 1878 and cleared 90 years later leaving only the most intereing 50 of the Swithland slate headstones all of them reset. Of particular interest is that to Samuel \Turner ( now on the north side) which he engraved himself with an account of his life. There are engravings of him as a shepherd at Harrington .He surveyed Market Harborough and made its first map c 1771. The Headstone incorporates a sundial, though the gnomen is lost.