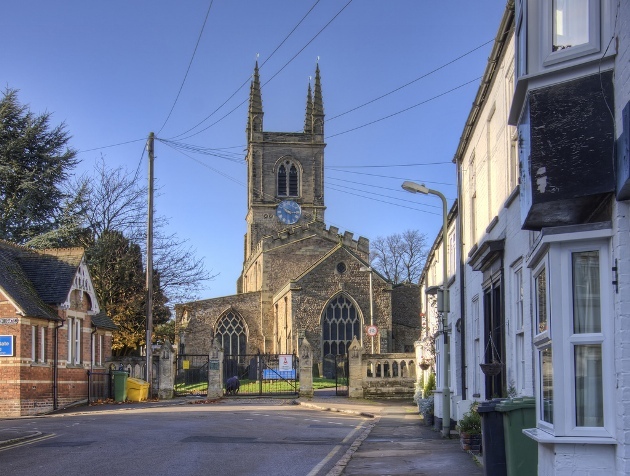 Fifteen miles south of Leicester is the market town of Lutterworth of nearly 8,500 people. The name of Lutterworth is probably derived from the Old Norse name “Lutter’s Vordig” meaning Luther’s Farm. Lutterworth was mentioned in the Domesday Book of 1086 and the town was granted its Market Charter in 1214 by King John and continues to hold a market to this day. It has a certain charm and although there are now large estates around the town it still has a charismatic centre. Being on the main road to London in years gone by the town was a major stopover point and many old coaching inns line the main street. 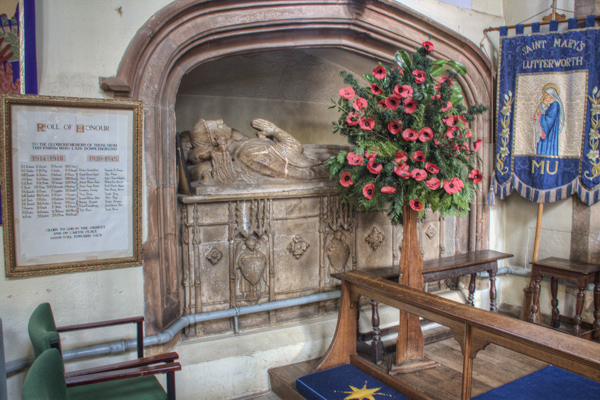 Also in the reign of King John a Nicholas de Verdon founded a hospital in the town dedicated to St John. With one priest and room for six poor men it was endowed with land and funds. The statutes for the Hospital were drawn up around 1310 by John D’ Alderby Bishop of Lincoln. Interestingly in 1329 one William Poyntell gave ‘eight messuages’ (buildings usually with land) lying in Hill Morton, Warwick to the Hospital of St John Baptist in Lutterworth, for a chantry priest to sing mass there for the souls of the said William and his Wife. So there must have been a chapel there at the site and I will cover ‘chantries’ soon as they are very interesting. The Hospital seemed to have been well endowed with more land in the following years. It was still going in 1502 when the Grey family were involved with the Hospital and also the town. If fell into ruin and decay but is still recorded in 1639. The site of the Hospital (as recorded in Nichols) was’ on a piece of ground adjoining to certain lands in the parish of Misterton, called The Warren, and divided from the town by the River Swift, with two water corn-mills close adjoining.’ Where it actually was I am unsure – I suspect it was nearer Misterton but this needs more research. 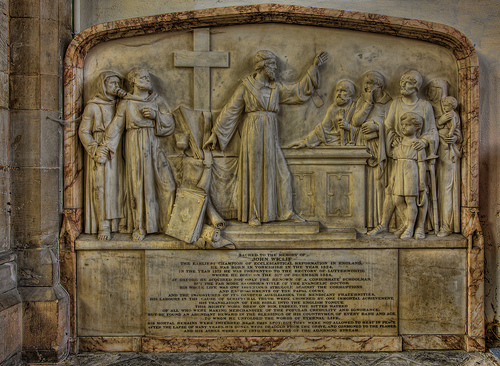 The large church dates from the late 13th century and of course it is closely associated with John Wycliffe who was rector of Lutterworth from 1374-84. John Wycliffe had a troubled life with the papal hierarchy and was accused of heresy and other offences. He was well educated, being at Oxford at least in 1345, and he completed the first translation of the Bible into English in 1382. Throughout his life he completed many more important contemporary works. He suffered a stroke during Mass at Lutterworth and died on the 31st Dec 1384. The Church never forgave his attack on them, and he was declared a heretic in 1415. In 1428, forty-three years after his death, Pope Martin V had the body exhumed. The remains were then burnt, and the ashes thrown into the nearby river Swift in Lutterworth.

Lutterworth’s other main claim to fame is that Frank Whittle, inventor of the jet engine, developed some of the world’s first jet engines at the British Thomson-Houston works in Lutterworth, and in nearby Rugby, during the late 1930s and the 1940s. 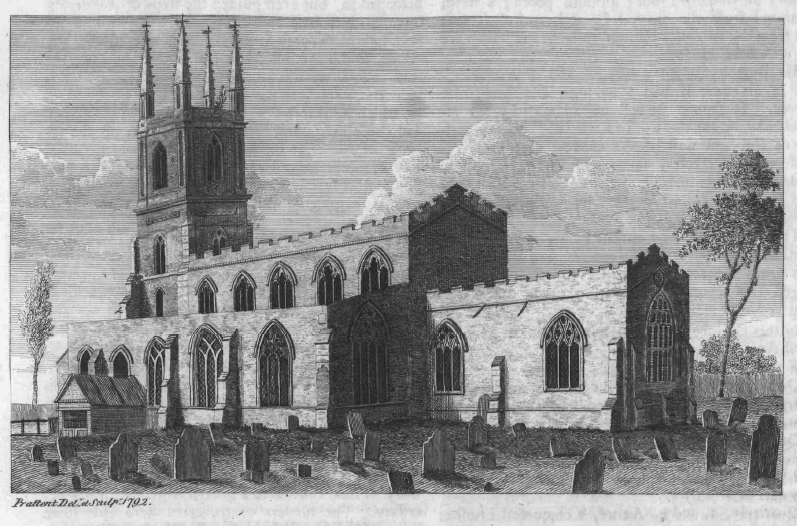 The church consists of a west tower, nave, chancel, north & south aisle, vestry and cafe/shop. The quadruple chamfered arches from the tower towards the nave and flanking aisles are late 13th century as are the lancets window in the chancel south wall and the west wall. Many of the windows have late c13 and c14 window tracery, and the aisle roofs date to the 14th century. The tower originally had a spire but this blown down in 1703. The top stage of the tower replaces the spire and was added in 1761. During the major restoration of 1867-9 there were plans to reinstate the spire and to build an outer north aisle. However this never materialized and instead he added the north chapel and vestry. 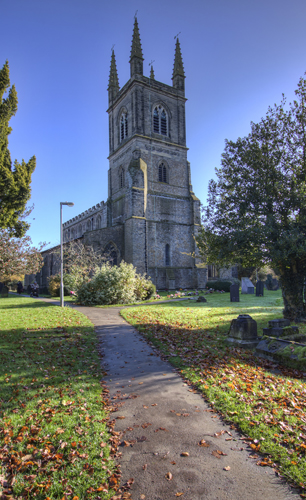 The pulpit is mentioned as probably having ‘parts’ from when Wycliffe was the rector. Although some of the pulpit could date to the perpendicular period this is later than when Wycliffe would have been there. (Mainly 15th century). The chancel east window was added in 1884 by Clayton and Bell. The marble sculpture in the south aisle to John Wycliff was by Richard Westmacott Jun and is dated 1837. There is also a tomb chest with two recumbent effigies dating to the 15th century. Angels hold shields on the sides.
We now come to several of the churches most interesting features and these are the medieval paintings around the building. The two major wall paintings were cleaned and restored in 1983 and 1984, although they were also ‘restored’ during the Victorian restoration. 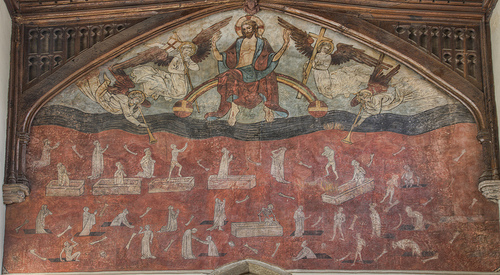 Over the chancel arch is a “doom” or “resurrection” representing Christ in glory, seated on a rainbow, supported by two orbs, on a sea of glass. Beneath the sea of glass is a reddish-brown background with a number of people rising from their graves, or coffins. There is no sign of “Hell’s mouth” which usually is prominent in a “doom” painting, though flames can be seen emerging from the foot of the coffin on the right hand side, and also impinging on the sea of glass immediately above the coffin.The original painting was probably 15th century, some of which is now exposed, together with traces visible under the Victorian restoration, the top part of the figure of Christ was repainted on new plaster during the restoration. 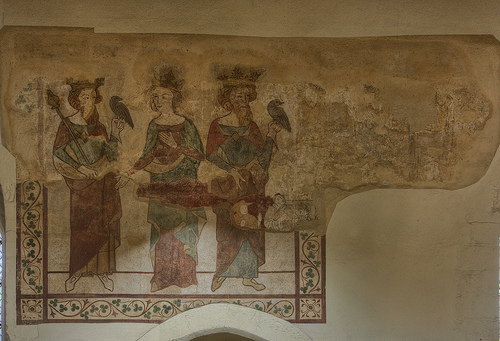 Though less prominent, the “three living and three dead” over the North door is more ancient and of great historical interest – as well as posing several questions which we are not yet able to answer.
The top part of the painting seems to have been preserved by the back paneling of the galleries, coming to light when these were removed during the 1860 restoration. The Victorian restorers repaired and repainted the three figures, replastered and repainted the lower half and enclosed them in a decorated frame (excluding the three dead) of which the lower part remains.
St Mary’s is a large imposing church with many fine features and of course the important Wycliffe connection. The church is usually open and there are plenty of amenities in the town plus ample parking. Lutterworth Church should of course be on your list to visit. They also have an excellent website I have added a link below and you can find out more about Medieval painting by reading an article here. 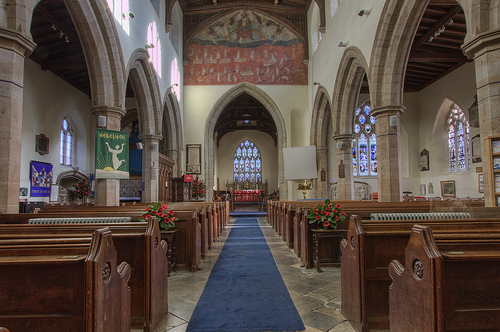 Addendum
Whilst ‘moving’ data from the old site to the new, I have been adding more information especially from Nichols History and Antiquities books produced in the last year of the 18th century. These take time but some interesting information in the Lutterworth section has come to light and although I should concentrate on church information (which I have added above) I do find myself drawn to the interesting anecdotes and stories of times gone by, so here are a few for you;

“In February 1725-6 at Lutterworth were found, by two men digging clay, 60 denarii and eight or ten large brass; the former of Julius Cesear, Trajan, Vesparian etc; but the latter were much defaced”.

“Near this place a murder was committed (the time is not said); and at length very remarkably discovered, and as justly punished. The matter as I find it, is thus related. In Leicestershire, not far from Lutterworth, a miller had murdered  one in his mill, and privily buried him in a ground hard by. This miller removed into another country, and lived there a long space; till at last, guided by the Providence of God for the manifestation of his justice, he returned to that place to visit some of his friends. Whilst he was there, the miller who then had the mill had occasion to dig deep in the ground, where he found the carcase of a man. This known, God put into their hearts to remember a neighbour of theirs who, twenty years before, was suddenly missed, and since that time not heard of; and bethinking themselves who was then miller of that mill, behold he was there ready in the town, not having been there for many years before. The man was suspected, and thereupon examined; and without much ado confessed the fact, and was accordingly executed.”

By 1801 there were 1652 inhabitants. “The cotton manufacture is now carried on in this town to a considerable extent by Mr. William Buzzard of Manchester, brother to Mr . Marston Buzzard, surgeon and banker of Lutterworth. Extensive buildings have been erected on the border of the town towards Hinckley; and a large and increasing number of apprentices (only yet as inhabitants of the town) are employed. The business, however, done here is only a branch of the Manchester trade. The material is sent nearly in a raw state; and the goods are returned to be entered, and in general sold, at Manchester.”