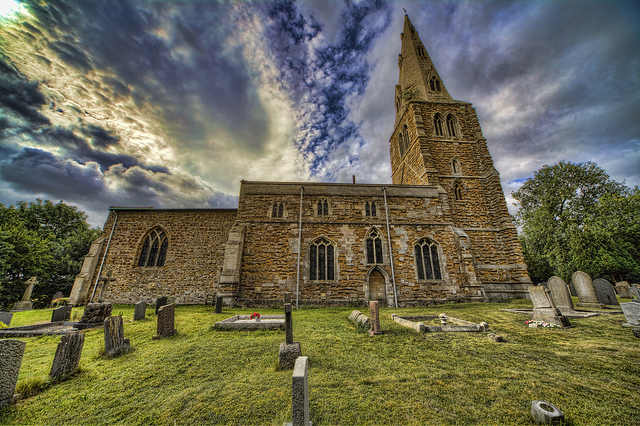 The north side of the church at Kirby Bellars

The small village of Kirby Bellows is a couple of miles southeast of Melton Mowbray on the A607 towards Leicester near to the river Wreake. Most of the village lies to the north of the busy road along Main Street. The village was mentioned in the Domesday Book with the name ‘Chirchebi’ the ‘Bellars’ was added later.
During Edward II’s reign a Roger Bellar founded a college with a warden and twelve priests, in 1359 it was made conventual, for a prior and Canons of the order of St Augustine which lasted until the dissolution. There are earthworks near the church which are all that remain of the former Priory. 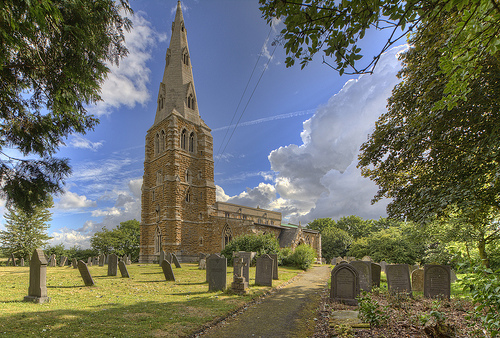 A good image of the church from the churchyard entrance

The church is down a leafy lane to the north of the village in a very quiet and peaceful location. The well worn golden ironstone tower demands your attention capped by the tall ashlar broached spire. It has three sets of lucarnes on all four sides. From the west the tower has niches and probably dates to the Decorated period 1250-1350 and with the arcades are the oldest fabric. The church consists of a west tower and spire, south porch, south aisle, nave and chancel. There was a north aisle but this was pulled down in 1690. 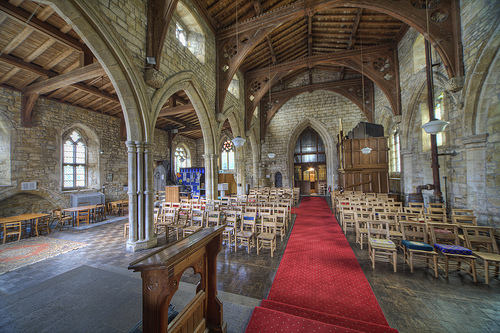 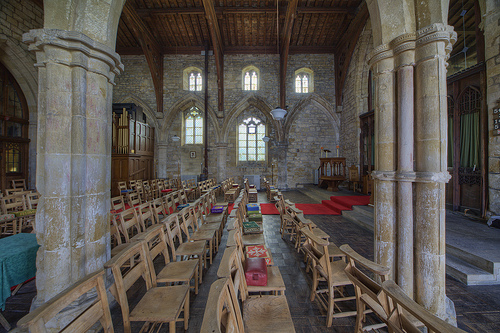 The northern blocked arcade the north aisle was removed in 1690

In the south aisle an early 14th century recess with two alabaster prone effigies of c. 1360-70, a knight and a lady, almost certainly Sir Roger Beler II with one of his four wives. The church is a grade 1 listed building but is usually locked – however there is a key available and instructions are at the church porch. I visited late July 2010 and it was an odd day on my visit with some great dark clouds and stormy skies. 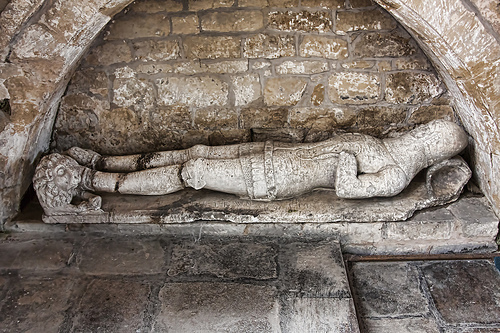 14th Century alabaster effigy to Roger Beller who gave the name of ‘Bellows’ to Kirby.

The pictures came out great. There is a pub in the village which is on the main A607 to Leicester but no other facilities. I liked Kirby Bellars church a ‘gnarled’ old tower and aan interior full of character – worth a trip out there are also some good walks nearby – see Asfordby entry for links. In the Google map below you can just see north of the church the ruins