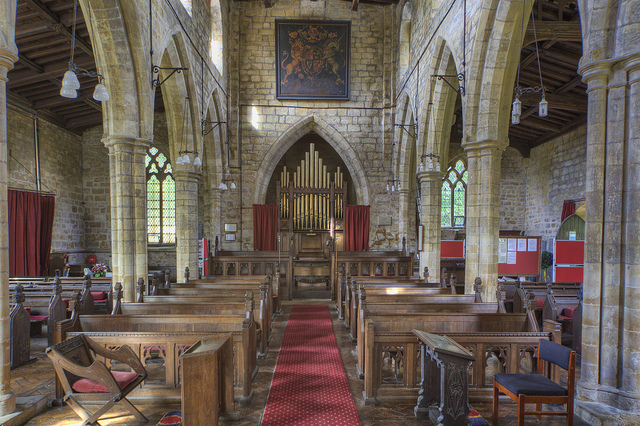 The pretty interior of Hoby Church

The church is situated on a slight hill overlooking the Wreake Valley ten miles north-east of Leicester. The church consists of a west tower with recessed spire, north & south aisles, nave and chancel. The tower has a 13th century base with the spire added later, probably in the 14th century at the same time as the clerestory. The rest of the church dates to the 13th century with some Victorian restoration work in the chancel. 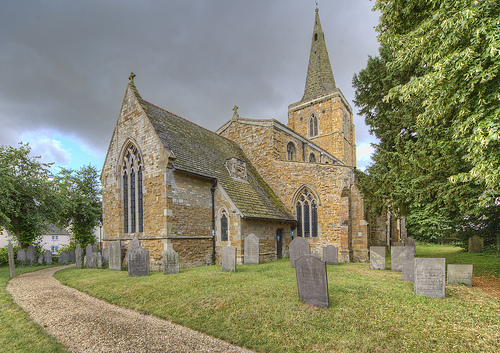 View of exterior from northeast

The two 13th century arcades have piers of unusual shapes, one pair round with four attached demi-shafts with fillets, the other with round shafts with four diagonal shafts of rectangular section. The church may have been built around 1216 and was probably built on the site of an earlier church. The south aisle may have been built as a chantry chapel for the Villiers family whilst the north aisle which is of a slightly later date has a ‘Reformation’ table resting on a 16th century tombstone. 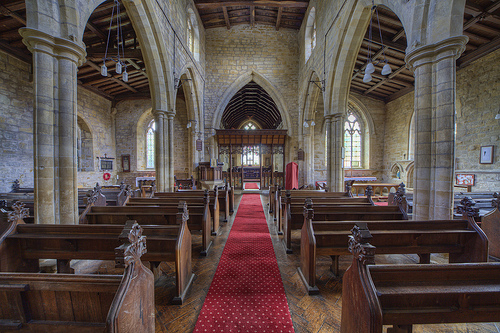 View down nave from west tower to chancel looking east

In the nave some the ‘poppy-head’ benches date back to the 15th century. The chancel was enlarged and rebuilt during Ewan Christian’s restoration in 1863-64. The stone altar top was restored to its original position in 1862, it had previously been in the floor of the nave. The old rood screen supplied the wood for the altar rail. The font is 13th century although it now sits on a 16th century tombstone.

There are five bells in the tower with the Tenor bell known as ‘Great Tom’.  In the late 17th century a Dorothy and Sophia Danvers became lost in fog whilst heading to Thrussington Grange nearby. After hearing Great Tom they made their way to safety.

There have been much needed repairs to the tower & spire in 2000 & 2004, the bells were restored in 2006, and the organ was renovated in 2007. The organ was built by Stephen Taylor & Son of Leicester and installed in 1876 at a cost of £143. 12s. 6d paid in seven instalments by the Revd Gilbert Beresford. In the graveyard is the stump of an old cross and there are some fine Swithland slates. 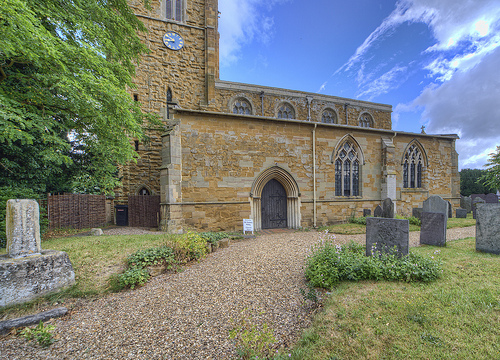 Remains of medieval cross can be seen on left of picture

The church at Hoby is situated in a pretty village and whilst it may not any great monuments or items of specific interest it is worth a visit should you find it open. The church is open every day from early morning until dusk.

There is a pub in the village and parking available outside the church.

The church at Hoby is usually OPEN. More information here.