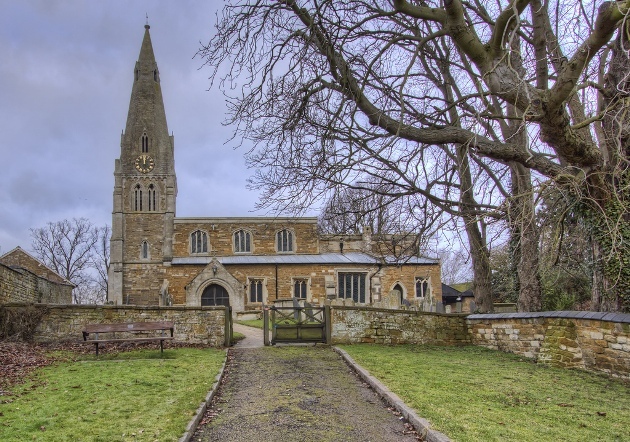 At the south eastern tip of Leicestershire is the village of Great Easton set in the Welland valley. It is located in the extreme south-east of the county and is very close to the borders with Northamptonshire and Rutland. It is just south of the Eyebrook Reservoir. This village had a recorded population of 558 in the census of 2001. The church of St Andrew sits on the high ground on the edge of the village and from the south porch there are fine views over the Welland valley and village itself. 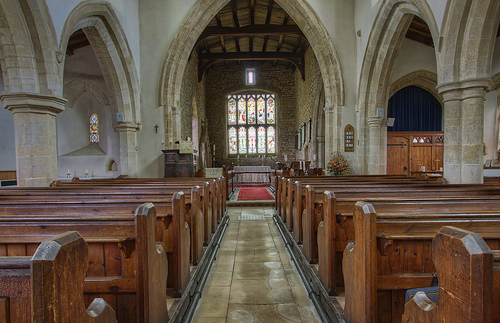 View to east window and chancel from nave.

The earliest parts of the church date from the 13th century, and the structure probably replaced an earlier Norman church built on the site. There are some herringbone masonry which is evident in the west wall, north of the tower which dates from the late Norman period. It is built of ironstone with some grey limestone dressings. The church consists of a west tower with broach spire, nave, north & south aisles, vestry and chancel. 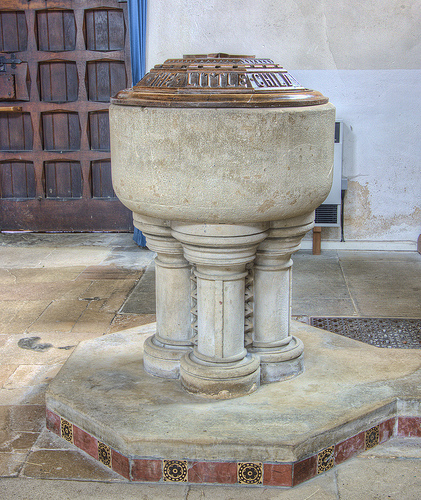 The font near entrance via south porch

In 1864-66 Ewan Christian completed a restoration of the church and although the tower and broach-spire were rebuilt he faithfully kept the original plan and this dates from the last 13th century. The only change was the enlargement of the arch to the nave.
The tower has angle buttresses, lancets, and as bell-openings pairs of two-light openings with continuous mouldings and bar tracery. There are also around the openings shafts with arches carrying dogtooth ornamentation. The boaches originally held pinnacles but these have now gone. 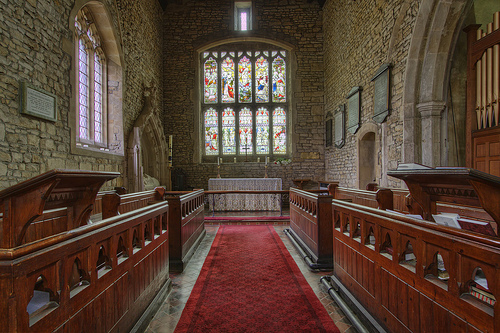 The chancel and fine east window

The north aisle also dates from the 13th century with its narrow doorway and east lancet. The south aisle is later, and the clerestory is perpendicular and dates probably from the 15th century. Most of the windows also date from this period. The vestry was added in 1906.
The tower houses six bells and were rehung in 1998. A new treble bell was added in 1997, and the original five bells were all cast in 1684 by Henry and Mathew Bagley of Chacombe, Northants. The tenor bell weighs 9cwt and has the inscription ‘I To The Church The Living Call And To The Grave Do I Summon All’. 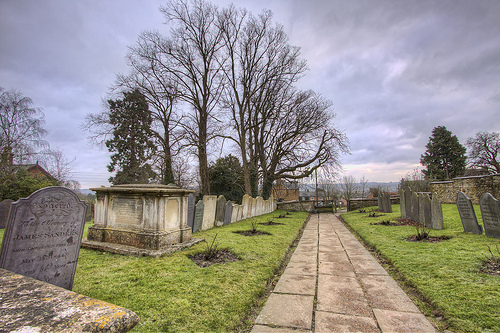 I did not have a good visit to the church as it was winter and the day was cloudy making it extremely dim inside and I could not locate the light switch (probably locked away as many churches now do this). So the resulting photographs are not to my usual standard. This may require a return visit.
The church has a commanding position over the Welland valley and although it does not have any great monuments or much of architectural merit (apart from the fine tower and broached spire) if you are in the area it is worth a look inside. The church is thankfully usually open and there are facilities in the village. However the only pub I visited did not serve food a rarity indeed in these days. So if you need more than a refreshing drink I would visit nearby Lyddington where there a number of pubs serving food.