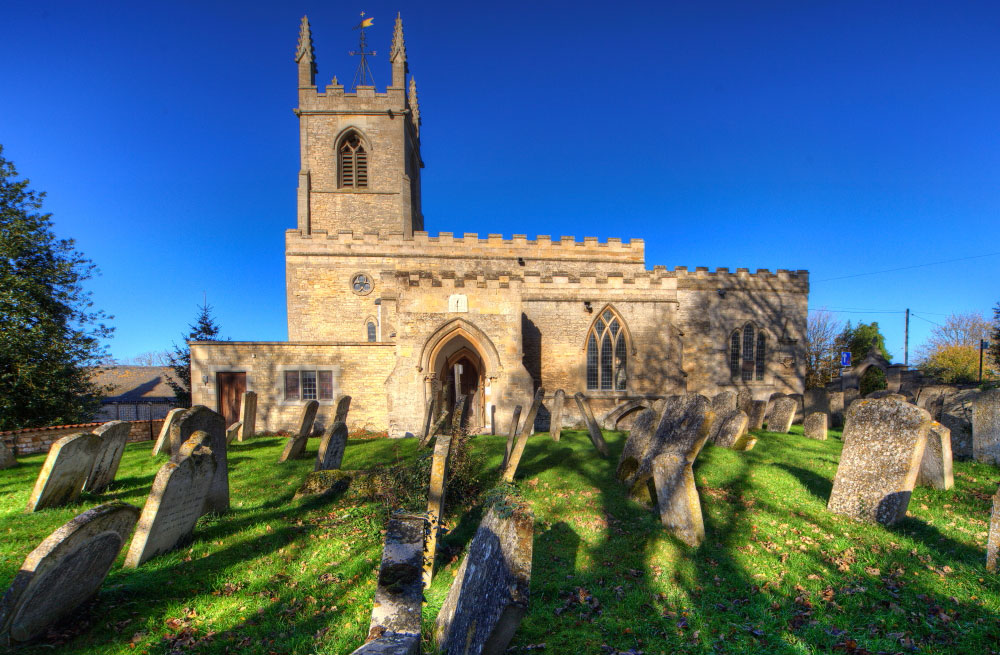 Late afternoon Autumn sunshine on the church at Great Casterton

This village with a population of 434 (2001 census) is only two and a half miles from Stamford and hence very near to the county border of Lincolnshire. The remains of a Roman fort and town have been found northwest of the church with earthworks still remaining. The manor passed to the House of Lancaster and the remaining manors were passed through many families and you can read more on this by following the link to the excellent British History site.

The church at Great Casterton has some very interesting features and is an attractive building with its ironstone fabric and pretty churchyard. Most of the church dates from the 13th century and consists of a nave, north and south aisles (1250 and 1280 respectively), chancel, south porch and an unusual tower which was added later by building it within the nave, but more on that later. There is also a vestry which was added in the early 1980’s. 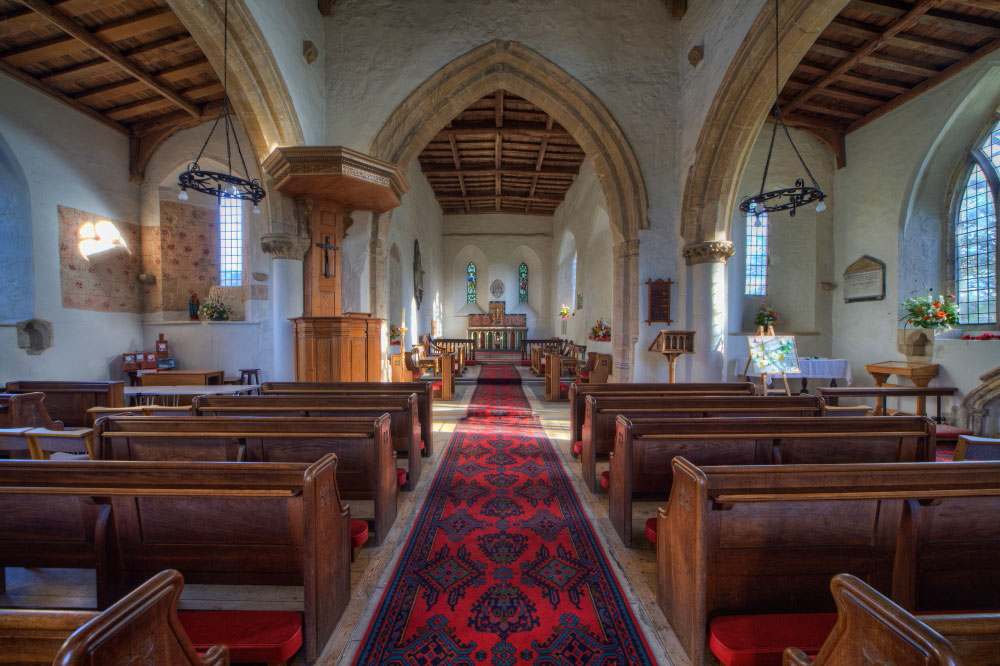 View of nave to chancel and east window. Medieval painting can be seen in north aisle.

The chancel although following the plan of the original Norman structure has lancet windows and is Early English, the east window has two lancet windows with shafts and stiff-leaf capitals. There are two monuments to former rectors and there are also four aumbries. These were discovered when some wood paneling was removed from the chancel walls in 1930 when a new altar, reredos and alterations to the chancel floor were undertaken. 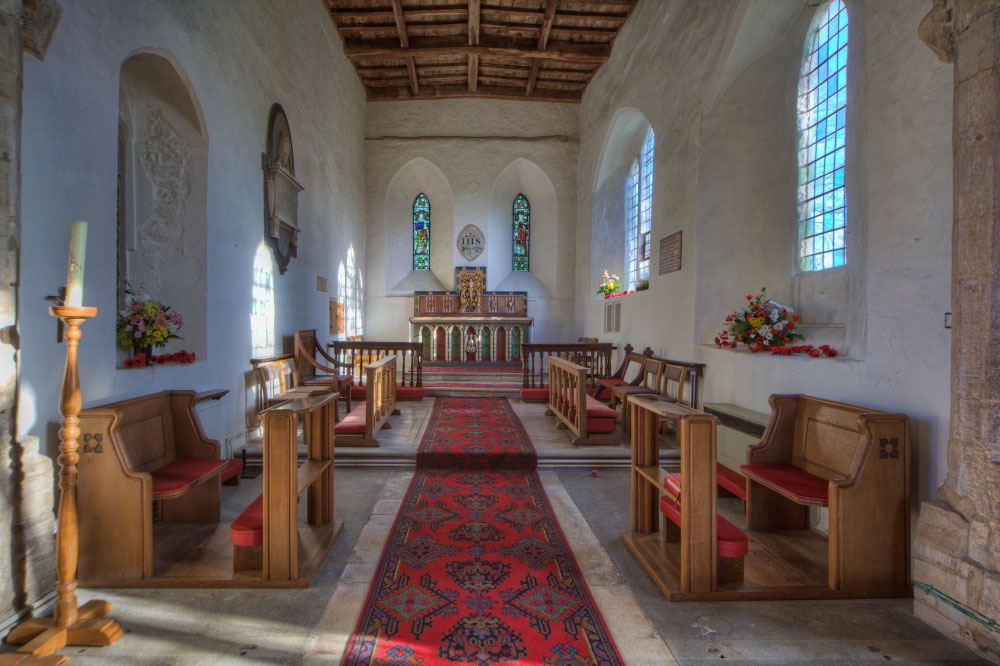 Chancel which was extended from the original 13th C build in the 14th Century.

The aisles were also built in the 13th century but do not reach the full length of the nave. The clerestory with its pretty tre-foiled windows date from the same period and adds character and of course more light into the church. The tower was added in the 14th century, but due to not enough land to the west the tower was built inside the nave with a large west archway. This is similar to the internal tower at Allexton. The aisles have piscinas at each end and these would have been used as chapels with altars. Most medieval churches used their aisles as chapels for various uses. The tower arch has a fine plaster tympanum with the arms of George II. 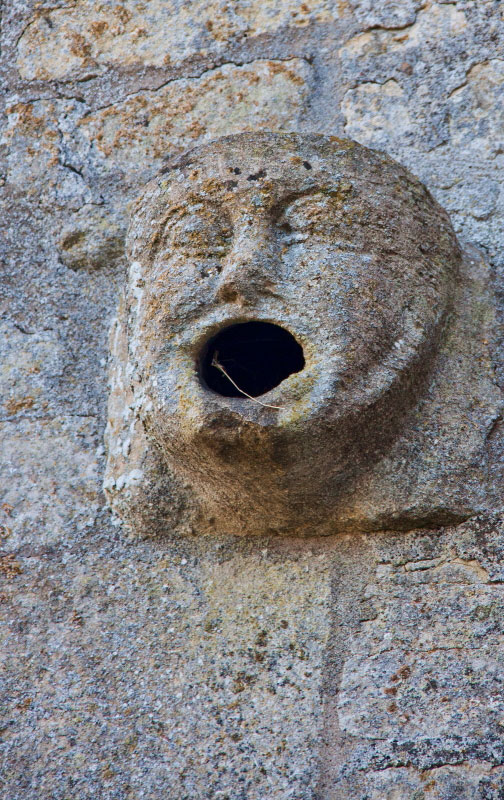 The Victorians did not complete the usual restoration on this church and it has retained much of its original fabric as well as some medieval wall painting of five petalled flowers that can be seen in the north aisle. There are some good carvings around the church and the font is an unusual square design from the 13th century with lozenge patten. The tall impressive south porch also dates from the 13th century although the embattlements and pinnacles on the church date from the 15th century. 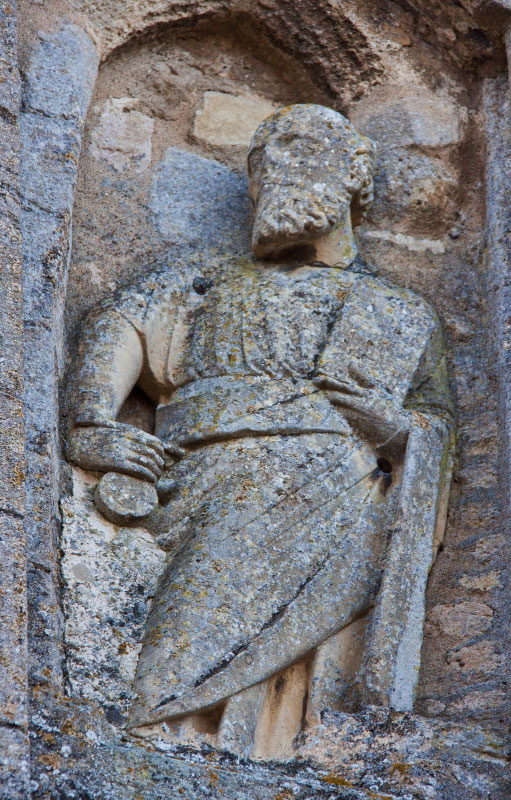 Exterior carving on east wall showing probably St Peter carrying a book, in his other hand a sword. The pommel still shows (taken as a money bag now) but the sword blade is missing.

On the exterior east wall of the chancel is a carved effigy of a person holding a book in one hand and perhaps a money bag in the other – this would signify St Matthew, however others think it is a sword and not a money bag (it is damaged) and as the church is partly dedicated to St Peter this perhaps makes more sense. If you look at the photography on the left of the effigy the stonework is not worn above the ‘money bag’ and I expect it is infact a pommel of a sword he is carrying and the actual blade has fallen off or been damaged. This would result in the unworn area which can be seen.
The church is open and there are facilities in the village and this church should be on your list to visit. It makes a good choice if you are planning on visiting the important church at Tickencote (being added soon) so you could visit these both at the same time.