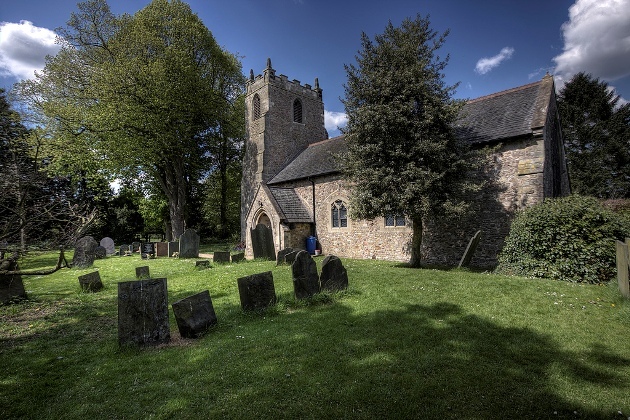 Many people pass the turning for the 10th century signposted church of St Bartholomew’s without a second glance, surrounded by mature trees it cannot be seen, and the medieval village that once surrounded it has long disappeared. It is approximately 6 miles south of Leicester and a couple of miles east of Countesthorpe where the church is ministered from. 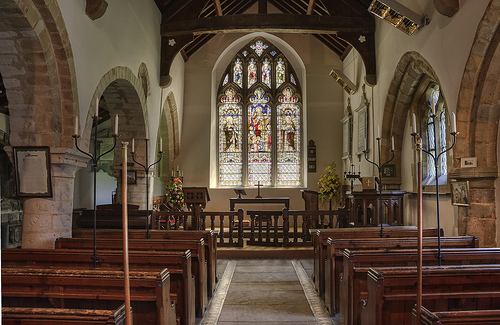 Nave and chancel, the Saxon window is above the second arch on the left

It is probably one of the oldest churches in Leicestershire and the Norman arcade which seperates the nave from the north aisle dates from 1081, these beautiful piers and arches have some crosses cut into the stone when the Norman building was consecrated. Above one arch is a filled in window which was originally part of the Saxon building that stood before the building was adapted by the Normans.
The church consists of a west tower, nave, small north aisle and chancel. The Victorians restored the church in 1874 but thankfully kept to the original fabric and made little building alterations. The western half of the tower collasped in the 18th century and was rebuilt narrower and to a lesser height in 1830, they paid for the work by selling two of the three bells – not unusual in those days. 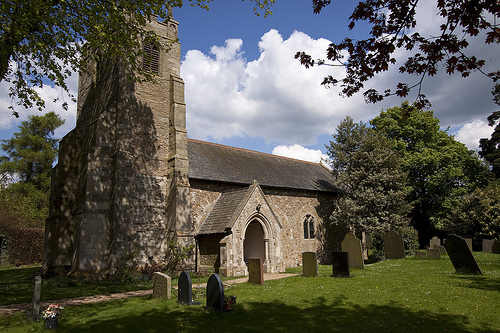 In the north aisle is a monument to Henry Faunt and his wife who died in 1665. He was the son of a Anthony Faunt who had enclosed the comman land at the end of the 16th century thus forcing most of the villagers who used the land to move away. We forget that the enclosures resulted in many poor villagers being uprooted and having to move in order to survive in this period in England. There are many such deserted sites around Leicestershire & Rutland where this occurred. By 1622 only the Faunt’s, a rector and three or four labouring families were left at Foston. 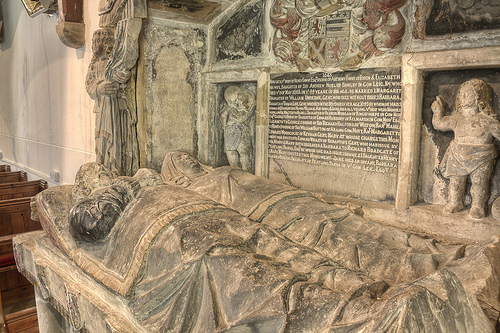 The church is still used and holds a popular flower festival in June which raises funds for the upkeep of this fine church.
Access is fine around the church but it is now kept locked unfortunately apart from events, services and some Weds mornings when it is open for visits – although please check on this. There is small car park outside the church with a disabled space.
There are facilities in Countesthorpe the nearest village for refreshments. Their website is here for opening information.
Foston is a fine church, it has a well kept graveyard and because of the beautiful Norman arcade it should be on your list to visit. It has a peaceful charm, that I will return to enjoy.