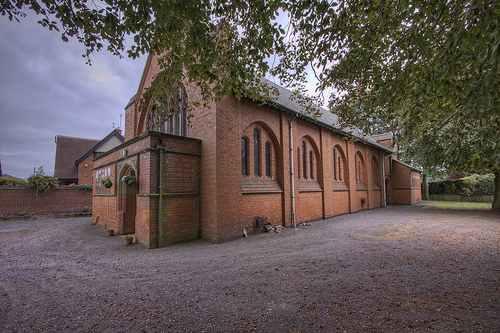 View from the south-west and the west entrance.

Designed by Goddard, Paget and Goddard this church built in 1895-96 of local brick is nearly as old as the village itself. Ellistown is 11 miles north-west from Leicester and 2 miles south from Coalville.
The village is situated in the mining area of north-west Leicestershire and coal has been mined in the area for centuries. There was a Swinfen Grange which was part of the estate of Garendon Abbey near Loughborough that used to be in the area of modern Ellistown. This was part of the parish of Ibstock. It was eventually called Pykeringe Grange at some point in the 16th century although there seems to be some confusion when this occurred or whether there were two actual Grange’s. 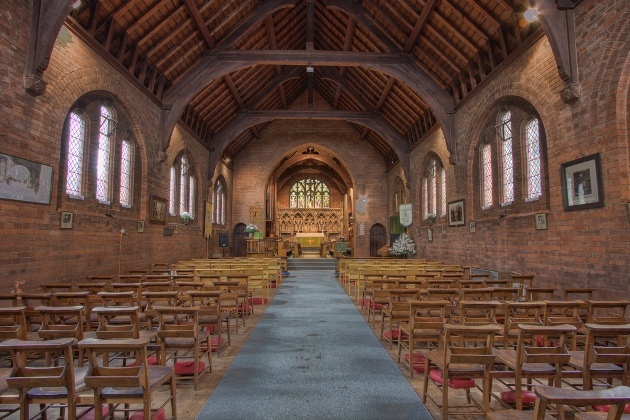 The large nave at St Christopher’s

In 1873 a Colonel Ellis sank a coal pit which was producing coal two years later, he also built some terraced housing and this was the beginning of Ellistown. By 1877 there were two pits and the village began to grow. In 1901 the population reached 1,937, today it is over 2,200. 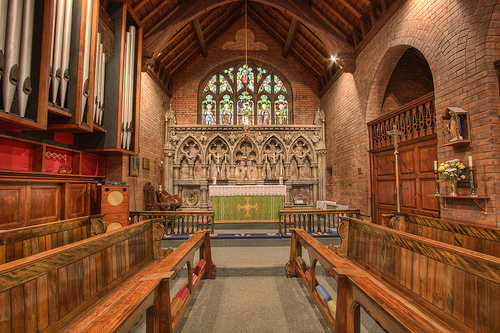 The church was consecrated on the 25th April 1896 by the Bishop and Mr Terry became the first vicar of the new parish. The wooden furniture is made of sandalwood with a green cross-grain. The stone reredo behind the altar was donated by Lord Burton of Burton upon Trent this originally was at St Paul’s church at Burton, it is a very fine feature. There was also a rood screen but this was removed in 1954. The east window depicts the four saints of Britain and Ireland on either side of St Christopher. The central panel of the west window shows St Paul. 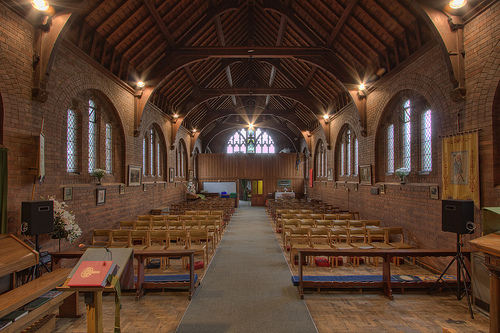 View to the west end from the chancel of the large nave.

The brick built church has a pretty interior, I liked it. The colours and fittings in the church give it quite an rich ornate appearance. The church has an entrance lobby with kitchen facilities upon entering in the west end. There is a large nave and chancel area. The unusual font sits at the west end. The church is not usually open and although it may look plain and uninviting from the outside and it has a very surprising interior. If you find it open – please visit you will be pleasantly surprised by this Victorian building.

The church at Ellistown is usually LOCKED. More information here.