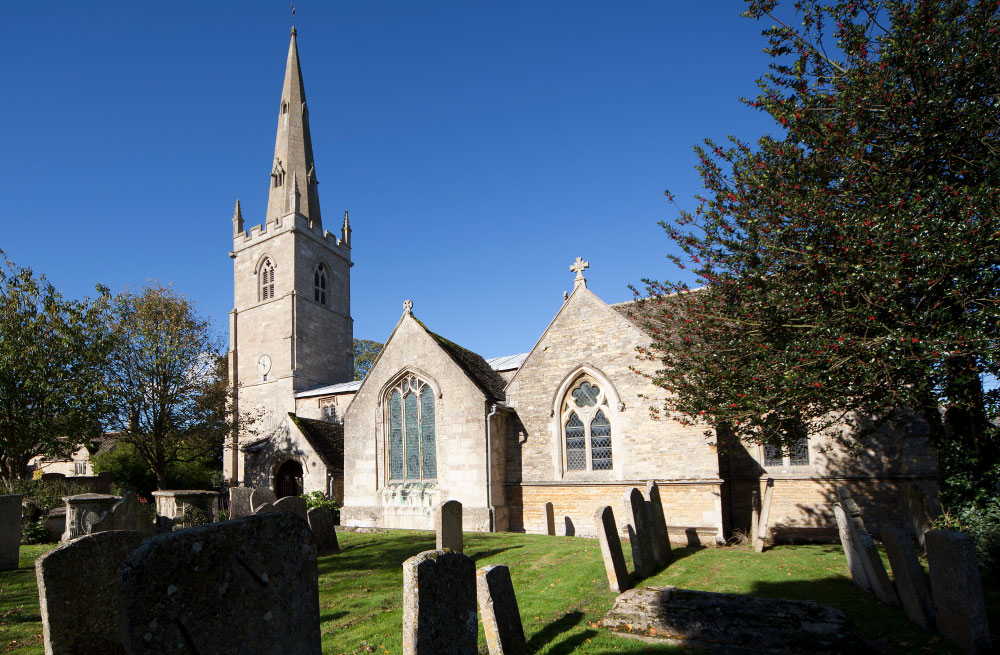 The pretty south view of the church with trancept and chapel

With a population of over a 1,000 this Rutland village lies very close to the south side of Rutland Water. It has an unusual name which is derived from Queen Edith who was wife to Edward the Confessor. There is mention of a monastic cell at Edith Weston which may have been sited in the grounds of the Old Hall. The Old Hall was pulled down in 1830 but there is some probability that it stood to the north-west in the park where there are remains of some fishponds. 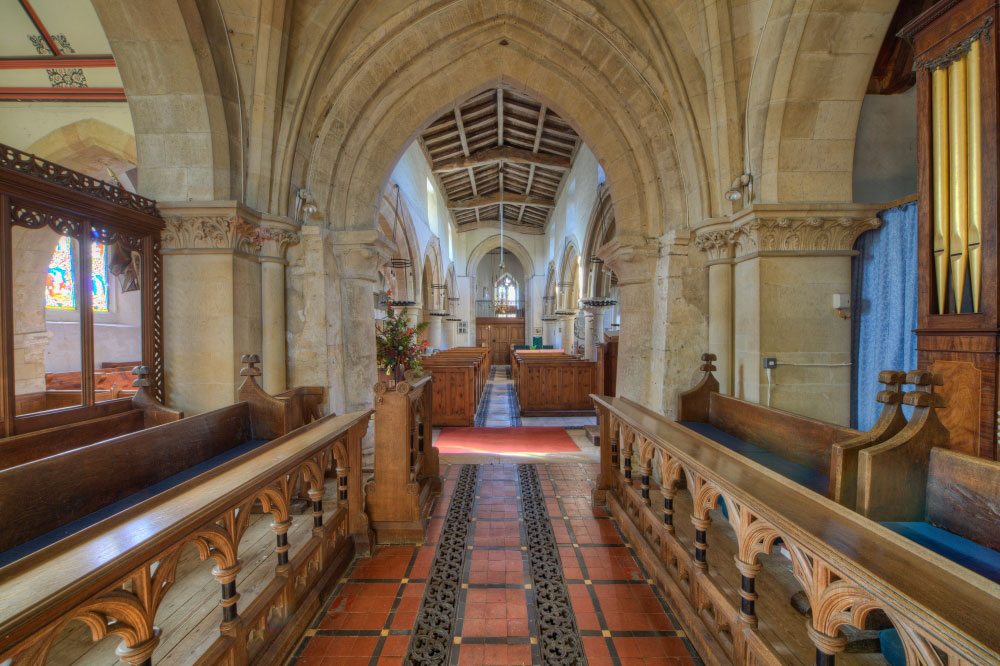 Looking west to the nave and tower arch, the Norman chancel arch can clearly be seen

In the Domesday Book the village is not mentioned but it may be one of the ‘berewicks’ of Hambleton (now across the water but originally across the valley and river Gwash). In 1114 William de Tankerville bestowed the manor to the Abbey of St George de Boscherville. It is monks from the this Abbey that created the cell at Edith Weston, but Henry III seized the priory late in his reign as the prior ‘lived beyond the seas’. The manor and priory then passed in 1404 to the convent of St Anne of Coventry. From 1550 the manor was granted to William, Marquess of Northampton and it then passed through many hands and you can read more on this by following the link to the British History site. 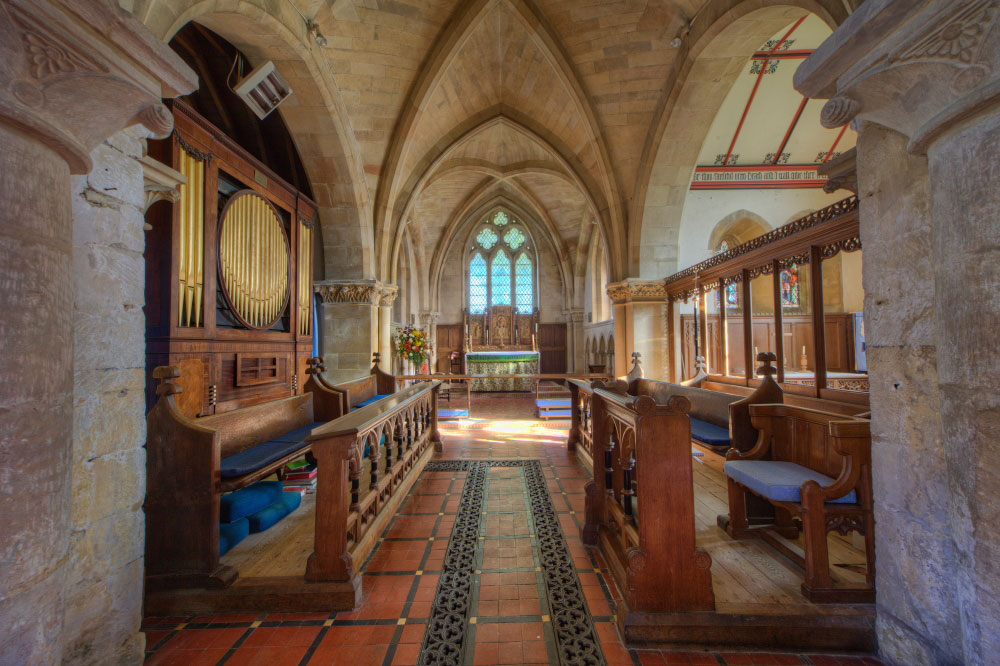 The chancel was rebuilt in 1865 the roof is especially fine.

The church of St Mary the Virgin has a ‘non-standard’ layout. If you visit this website and have read some of the entries or looked at the section ‘Read your Church’ you will know what I am talking about. The church has west tower and spire with lucarnes, north aisle, nave, south aisle and also a south trancept. We also have a chancel with a south chapel from it and north from the chancel a organ chamber and vestry. This gives the church much character and there is plenty of interest in this church.
The Norman chancel arch is the oldest fabric and there are some good carvings on the capitals and shafts which it has been suggested have a resemblance to similar work at the abbey of Boscherville in Normandy. The north arcade dates to the 12th century whilst the south aisle arcade is dated a little later to the early 13th century. 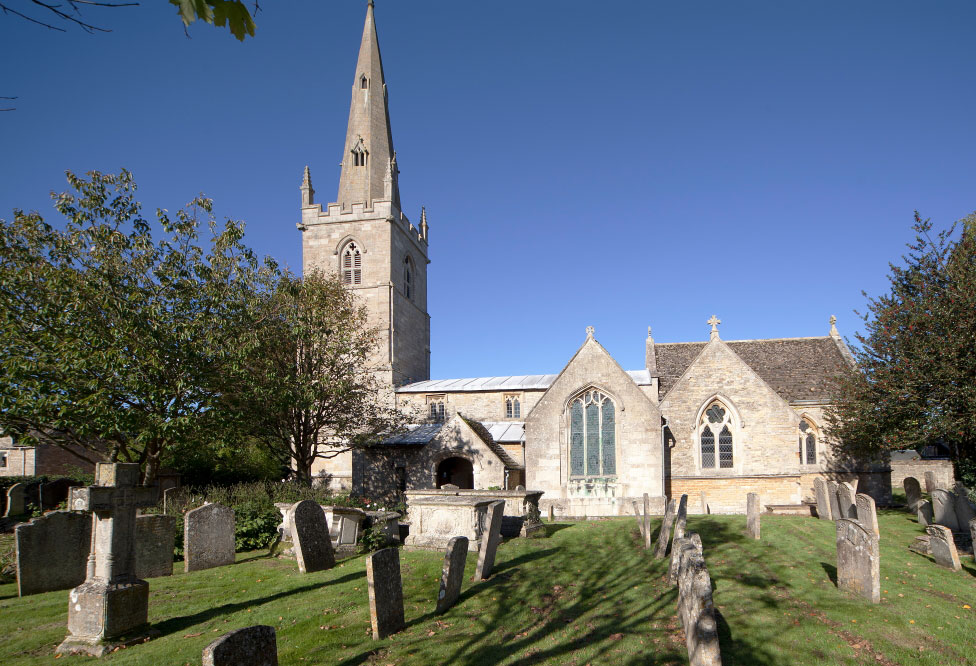 The well proportioned tower with pinnacles and recessed spire are 14th century, the transept may also date from this period as well as the clerestory. The impressive chancel was rebuilt in 1865 as well as the south chapel by Slater & Carpenter under the charge of Rev. Charles Halford Lucas. The reredos by Sir George Frampton is a memorial to the Rev Charles Halford Lucas and has carved relief’s of Christ enthroned and the Annunciation (the announcement of the Angel Gabriel to the Virgin Mary that she would become the mother of Jesus the Son of God).The porch was added or rebuilt in the 18th century. A large picture of St Christopher was found in 1848 on the north wall of the nave between the clerestory windows but could not be preserved. The font is ancient but the date cannot be judged. 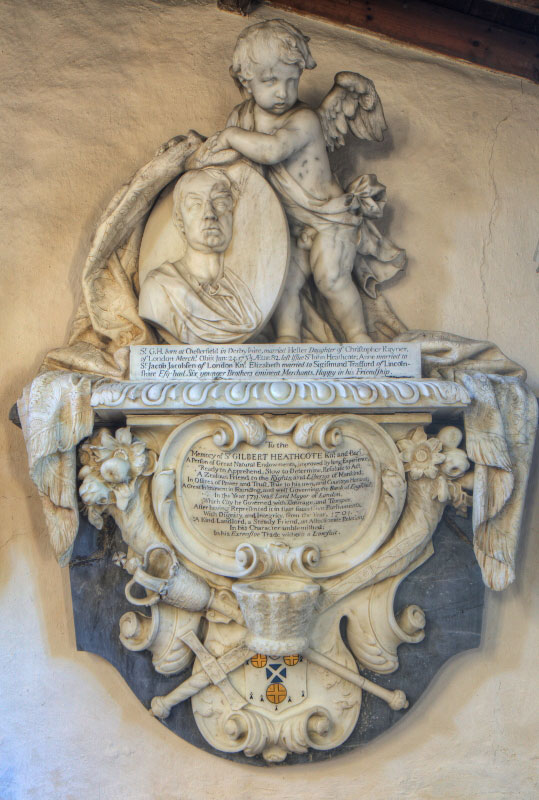 The church has some fine memorials including the Halford and Lucas composition which has inscription plates, columns and a middle pilaster. The memorial to Sir Gilbert Heathcote (d. 1733) by J. M. Rysback was formerly in Normanton Church. It shows a ‘putto’ (a small figure of a winged naked baby or toddler) holding an oval slab with Sir Gilbert’s portrait. The inscription calls him ‘a great instrument in founding and governing the Bank of England’, he was Lord Mayor of London in 1711 and was the last Lord Mayor to ride on horseback in the procession (here’s is your chance Mr Boris Johnson!). 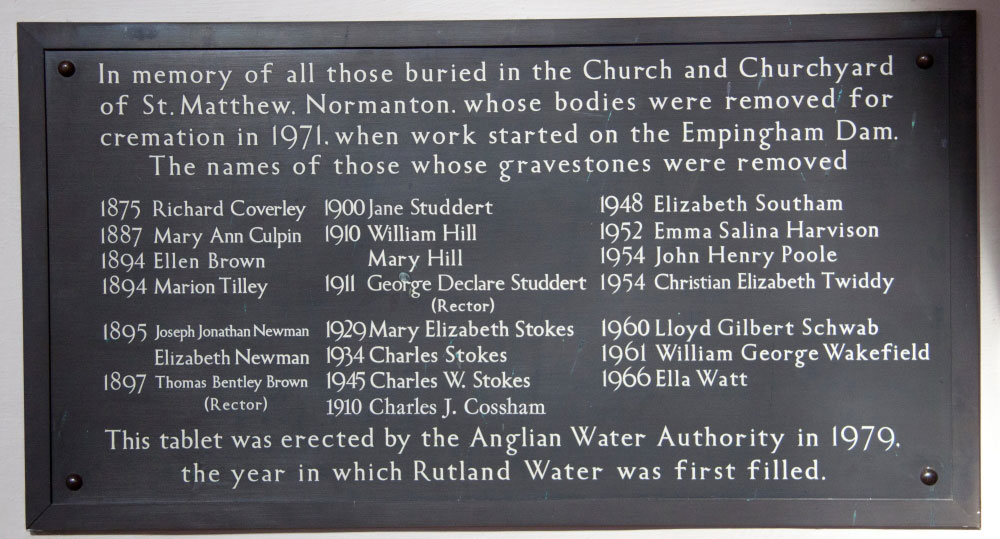 When Rutland Water was created the chapel for the Normanton estate was submerged so those buried in the graveyard were removed for cremation in 1971. A plaque gives their names and dates of burial. There is also a modern stained glass window showing Jesus in a fishing boat with his disciples upon Rutland water – the chapel of Normanton can be seen in the stained glass. Normanton Chapel was ‘moved’ to stop it being submerged and de-consecrated in 1970, it is now a museum on the bank of Rutland Water and will be added to this site eventually. Many farms, houses and Nether Hambleton were lost when the reservoir was built and I will cover this more when I add Normanton Chapel and Nether Hambleton.
The church is a real delight and has a pretty churchyard. There is plenty of interest and there is ample parking outside and facilities around the local villages. Always open and worth a visit.