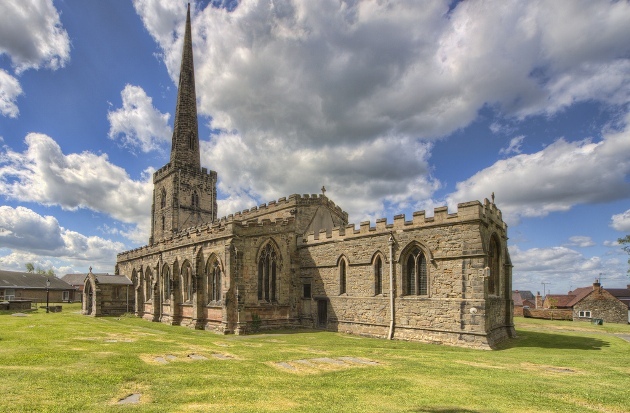 The impressive church at Castle Donington

The large village of Castle Donington is 18 miles north-west of Leicester and is sited near to the county borders of Derbyshire & Nottinghamshire. In fact the village is nearer to Derby and Nottingham than Leicester. The population today is around 7000 and the village has the busy airport nearby and Castle Donington racetrack. The circuit also hosts the Donington Grand Prix Collection, the world’s largest collection of Formula One and Grand Prix vehicles. 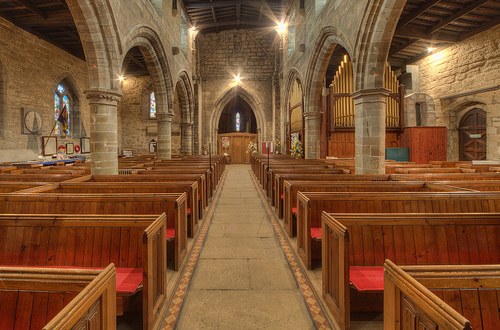 Looking west to tower arch and nave, the large organ can be seen on right in north aisle

The village was recorded in the Domesday Book in 1086 as belonging to a Earl Hugh. There was a castle in the village which has now disappeared. The early 12th century castle was held by the de Lacy family. It was attacked around the time of the Magna Carta. In 1311 it passed to Thomas, Earl of Lancaster, the cousin of Edward II and eventually become Crown property, the castle was eventually demolished in 1595. 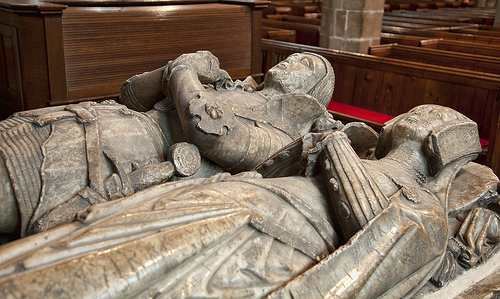 Castle Hill is approx 500 yards north of St Edward King & Martyr church which is sited on high ground behind the main shopping street of the Borough. The church commands a large open space surrounded by pretty Georgian houses and most of the gravestones have been removed. From the Borough (free parking along here) there is an ironwork gate leading up a short steep incline to the church. The church dates from the 13th and 14th centuries and as befitting this large village is quite a large structure. The church consists of a west tower and spire, nave, north and south aisle, north porch and chancel. 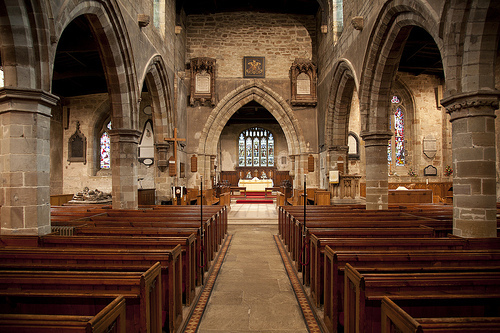 View to chancel from nave area, the arcades date to the 13th century

The arcades are Early English and date from the 13th century, there are some decoration on some of the piers and columns. The chancel also dates from the 13th century and there is a fine ‘squint’ dating a little later which is from the chancel to the north aisle. The east window is a 19th century restoration the stained glass is by Kempe & Co and was installed in 1902. The aisle windows date from the 14th century as does the the west tower. The tall recessed needle spire is very fine and can be seen for many miles. The corbels in the nave area are supposed to represent the ages of women and of interest as is the inside of the pulpit where old tomb stones have been used on the inside walls. There are also a few monuments. There is the effigy of a priest (circa 1330) in an ogee arch, a tomb chest with good brasses to Robert de Staunton and his wife who died in 1458, and alabaster effigies to Robert Hazylrigg with his wife dated 1529 (this is the same family who owned and still do own Noseley Hall – see entry for Noseley Chapel). At Clifton Campville in Staffordshire there is almost a duplicate of this monument which is unusual. 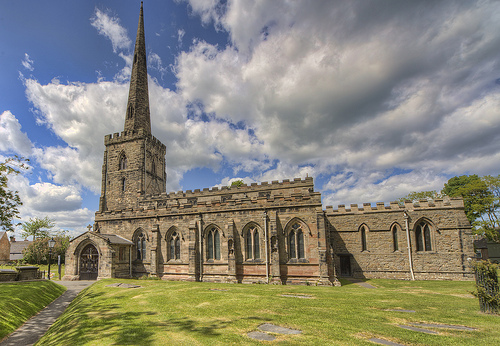 North side of St Edward with the porch and the tower

The church does not seem to have suffered too much at the hands of the Victorians although the plaster was probably removed in this period leaving the rubble walls which show today. The removal of the plaster by ‘hacking’ it away can clearly still be seen on the stonework. The large organ is also of note and commands the west end of the north aisle.
I do like St Edward King & Martyr’s it a very majestic church with some interesting features and a grand spire. It has commanding views of the surrounding counties and is set in a good location. I would like to thank the churchwarden for meeting me there and for showing me around the building. There is parking nearby and lots of amenities but the church is usually locked outside of normal services.