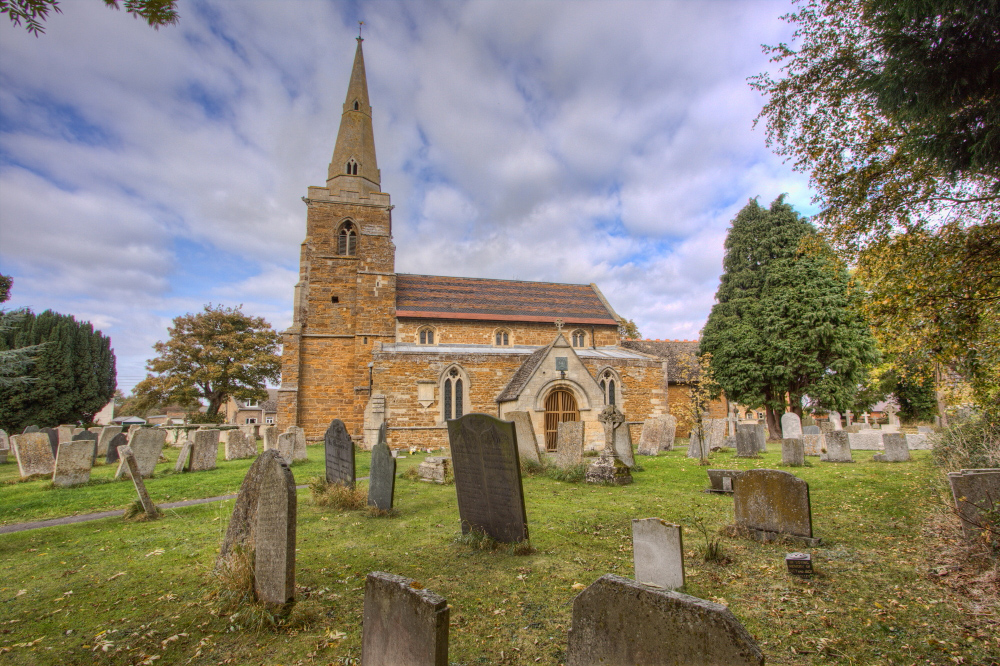 South view of church with its coloured tiles and ironstone tower.

Caldecott is the most southerly village in Rutland and is located about 4 miles south of Uppingham and today has a population of approx 260 people (2001 census). The village was mentioned in the in the Domesday as attached to Liddington (Lyddington) and held by the Bishop of Lincoln. In 1246 the Hospitallers were granted a free warren in their demesne lands in Caldecott. There was also a Snelson village that lay to the north of the parish but this has now gone and the name was last mentioned in 1650 in reference to a Snelson’s field. 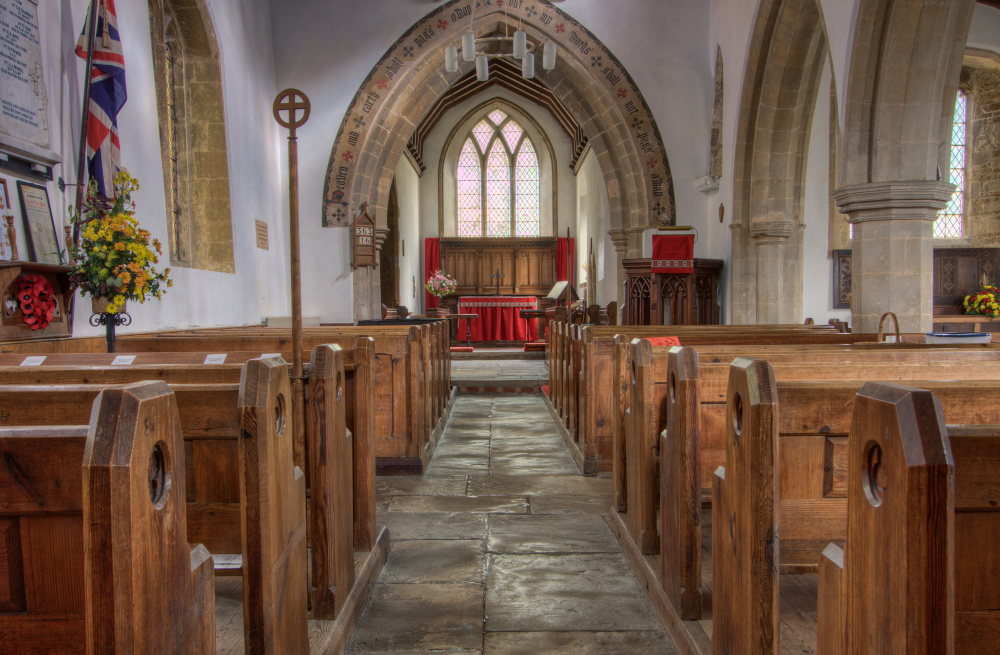 Flagstone floor, and view of nave and chancel arch with Victorian stencil (1865 probable)

The church dates from the 12th century although there is some Norman fabric remaining in the form of a small window in the chancel south wall. It has a west tower with spire, south porch dated 1648, nave, south aisle, chancel and organ chamber which was added in 1908. The church underwent a major restoration in 1865 when the chancel was rebuilt but the church retains most of its ancient features intact. In the 13th century the church underwent expansion when the south aisle and arcade were added, the tower and spire date from the end of the 14th century and the clerestory from the 15th century. The font is ancient and although has been altered dates from the 13th century. 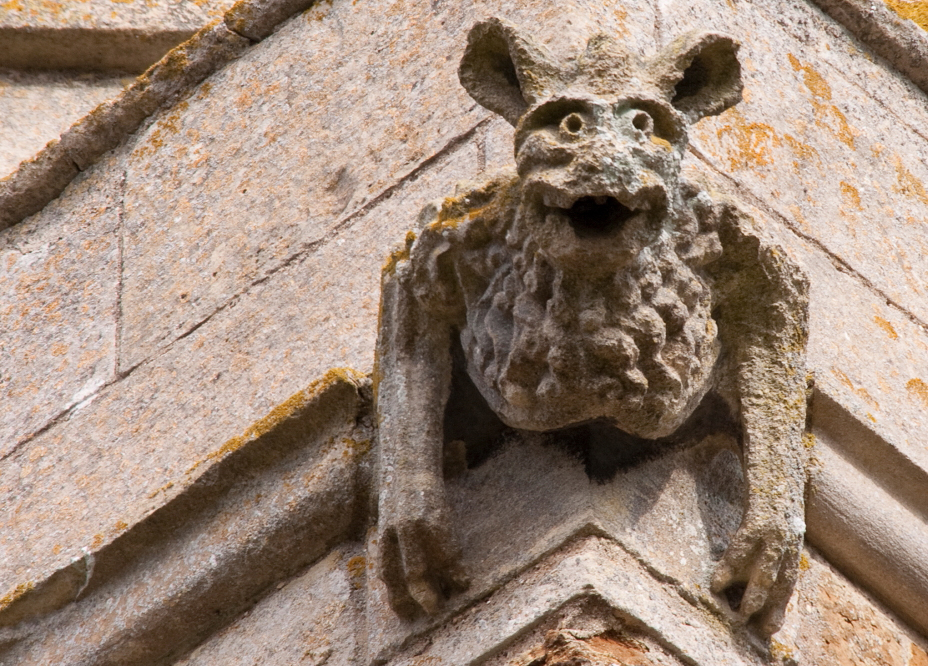 One of the four large gargoyles that sit at the top of each corner of the tower.

The tower is of three stages marked by strings with moulded plinth and large buttresses, the tower terminates in an embattled parapet with a grotesque gargoyle at each angle. The spire was struck by lightning on 30th July 1797 and afterwards built of Weldon stone.
When the chancel was rebuilt in 1865 several Roman tiles were found in the chancel area, also when the plaster was off the walls a stone about 2ft square with a border was found over the middle of the chancel arch having a crudely carved sculpture of two human figures in relief, it was plastered over again. It would be nice to see this again at some point. 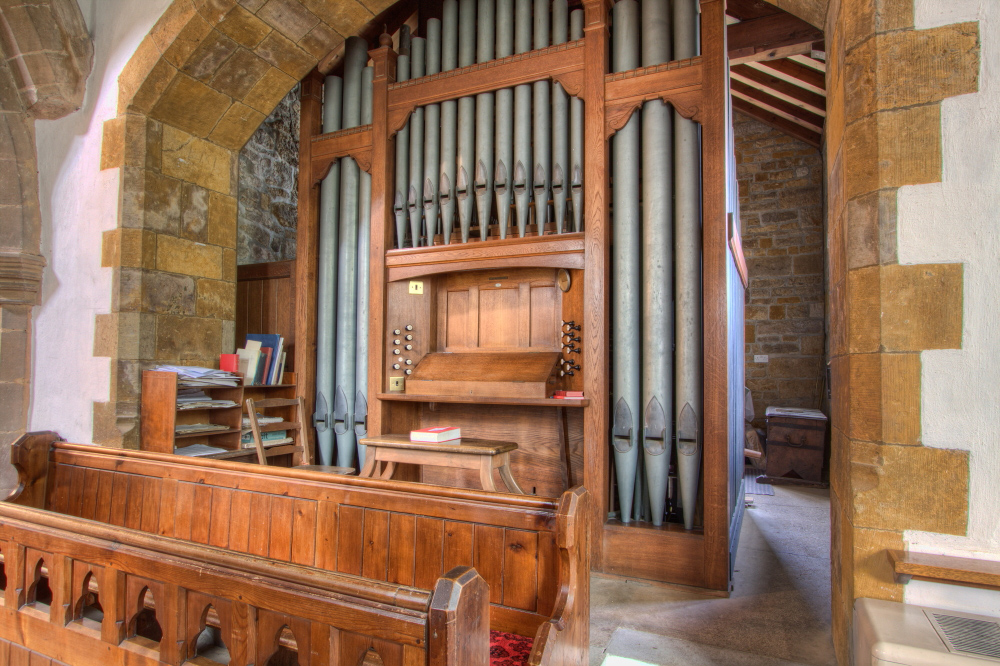 The organ chamber added in 1908 and the instrument.

I also found this interesting information at the Bristish History site.
“In 1639 Robert Rudd, vicar of Liddington-cum Caldecott, was defendant in a suit promoted by Peter Woodcock, grazier, in the Court of High Commission. It is stated in the sentence that Rudd had been vicar of Caldecott 40 years and for sundry years had omitted to read divine service at Caldecott; he neglected to wear a surplice, but only a threadbare coat with four skirts; he busied himself with sordid employment and served a thatcher with straw; he preached at Caldecott that Nebuchadnezzar was a great grazier and did eat grass like an ox and died like an ass, like divers graziers then did, referring, as was thought, to Peter Woodcock, a grazier of the parish; he refused on Palm Sunday to administer the Communion to some forty parishioners, and at other times, although having sufficient wine, he used to draw away the cup from the communicants. The court ordered that he should be suspended and another minister be put in charge at a stipend to be paid out of the vicarage, and further he should pay a fine of £100 and make public submission.”

From: ‘Parishes: Caldecott’, A History of the County of Rutland: Volume 2 (1935). The church is open and there is limited parking on the road to the north side. I was unsure of Caldecott when I first arrived, but look further and there are some interesting points of interest.