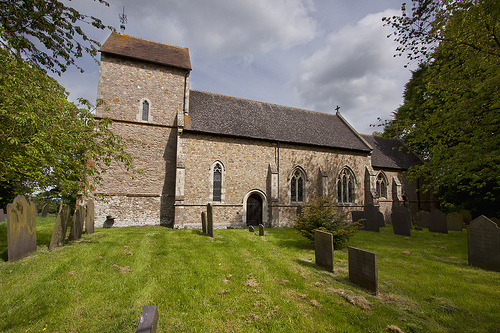 Some 9 miles south of Leicester and a few miles northeast of Lutterworth lies the small village of Bruntingthorpe. The church of St Mary’s once surrounded by the village now is surrounded by fields, in the late medieval period the villagers started to build their houses to the north east. 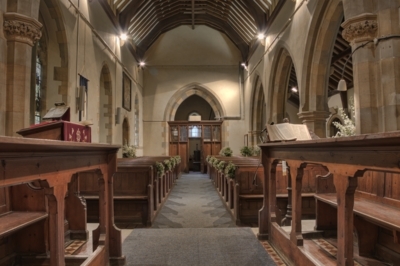 There was probably an early Anglo Saxon settlement here before the Danes arrived in the ninth century. After the Norman Conquest as was often the case the manor of ‘Brandinestor’ was in the hands of a Robert, a vassal of the Norman Count of Meulan. The manor passed through several hands and by 1392 the Hastings family had acquired the manor which they held until 1538, one Lord Hastings, Great Chamberlain to Edward IV started Kirby Muxloe Castle but it was never finished and he was beheaded by Richard III in 1483. The Ferrer’s then took control of the manor after 1538 but it then passed to various families. 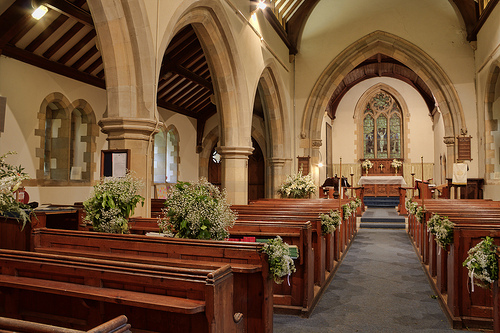 East window and chancel in distance, north aisle to left

The church consists of a west tower with an unusual swithland slated roof, nave, chancel, north aisle and transept. It was largely rebuilt in the restoration of 1873 and ‘razed to the foundations’ apart from the tower which was dismantled as far as the belfry parapet. It is intersting to note that in around 1800 Nichols describes the church as;
‘The church dedicated to St Mary consists of a low tower, covered with swithland slates; a small nave and chancel of one pace, a South and North door (but no porch) into the nave, and a south door into the chancel. The pulpit is of oak; and in general, old open seats. A gallery at the West end of the nave, on the back of the front beam of which is cut 1T.1779. A round ancient plain font, upon a low kneeling step’. 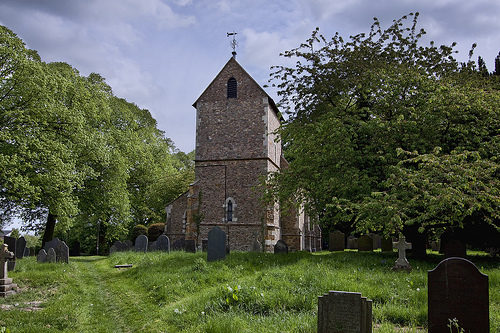 The ‘new’ church was started in march 1873 and completed in September, the tower was also re-pinned and strenghthened and the total cost was £1736. 2s. 0d. The church remains nearly unaltered since 1873 and the 12th century font survives from the earlier church. A organ installed in 1913 replaces the harmonium installed in 1873. On the north wall of the chancel is a large painting attributed to either Thos Freeman R.A rector in 1795 or the earlier Sambrooke N. Russel, M.A rector in 1770 (also rector of Saddington). It depicts the Descent from the Cross, but the churchwarden who kindly let me into the church pointed out that it seems the rector had painted himself into the picture! 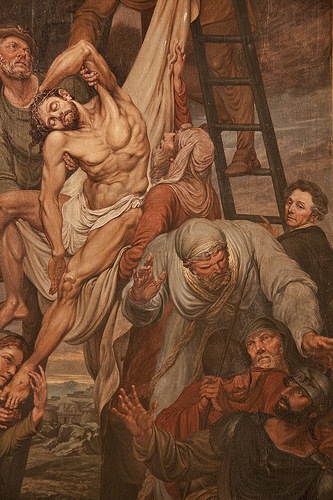 Painting in north wall of chancel, the likely artist is holding the ladder on the far right.

You can see this in one of the pictures to the right where he is looking on at the base of the ladder.
Bruntingthorpe church is still being used for services, and a wedding had taken place the day before I visited hence the lovely flowers, it is a peaceful place with some lovely stained glass. The village has two public houses if you require refreshments and access to the church is fine with no steps and a gravel path. I would like to thank St Mary’s for the historical information