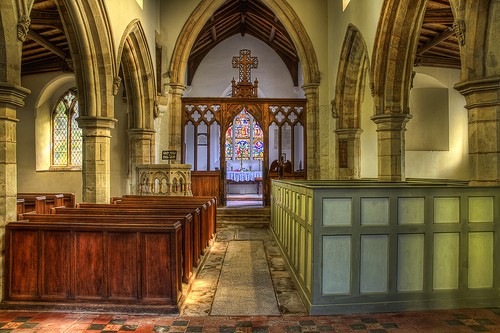 Beeby lies 5 miles northeast of Leicester, it now consists of a only few houses, manor house and farms. The village was originally larger and perhaps filled the fields that now surround the church. The old rectory is sited behind the church. 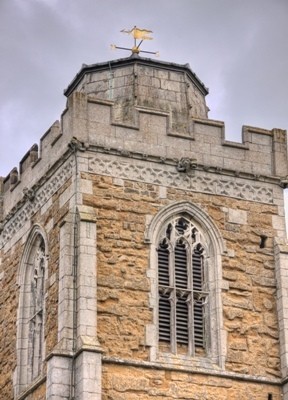 Beeby stump of a spire

The stump of a spire on the church can be seen from the approach to the church, it was started but never completed. The tower dates from the 15 century with ashlar and then ironstone, the brick chancel was added in 1819. The Perpendicular church consists of west tower, nave, chancel and north and south aisles. The nave has fine clerestory windows and a large archway from the nave to the tower, in all a very elegant church. The south aisle dates from the 14th century and is slightly older than the north aisle; the tower was built into the fabric of the church as there was little room to add this on the west end. 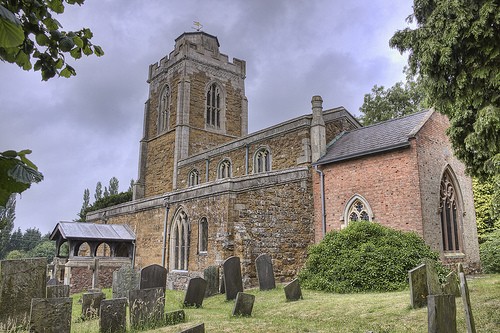 Inside we have a chancel screen that dates from the mid 14th century and in the nave we have the box pews painted in a pastel green that date from 1835 but probably earlier. The Victorians who have ‘restored’ so many of our churches luckily missed Beeby and we have a Georgian interior intact with regard to the seating and other features. 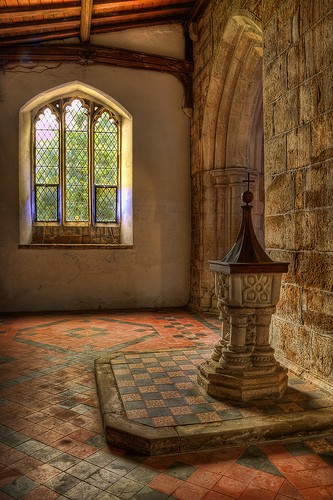 The font dates from the 13th century and the church has interesting corbels from various dates. 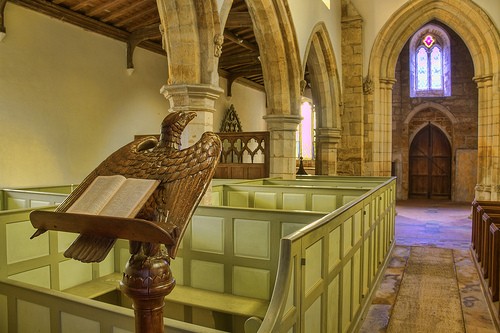 The stunted steeple at the church is also known as ‘Beedby’s Tub’ and a story goes that two stone masons who were brothers quarreled when building the steeple and fell to their deaths. There is a rhyme to go with this story
“Beeby Tub without a pub,
A church without a spire.
Two brothers fought and broke their backs
And so ‘twas built no higher” 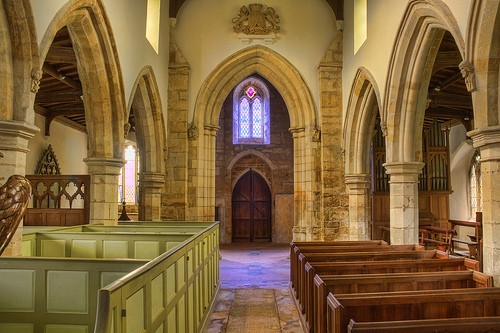 Beeby is an interesting church with its box pews, odd corbels and chancel screen dating from the 14th century. There is also remains of a staircase in the north aisle east end which would have been for the rood loft. 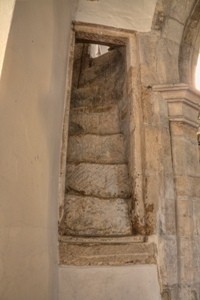 The church is now cared for by the Churches Conservation Trust and is open every day and the nearest facilities are in Barkby. Link below to opening times
When I was in the church I heard plenty of buzzing, when I got home and started to process the pictures I found out why. Above the south ‘chimney’ appeared lots of very tiny black dots – looks like there is a bees nest in the church at Beeby – quite appropriate.
Chris Stafford visited in the church in Jan 2011 I have added his notes below and comments.

Beeby stands proudly on a bend in the middle of this tiny, straggly village, only a few miles from the centre of Leicester, but it could be a hundred miles, given the quiet country feel to the place. It’s an odd mix of materials, the
main church looks to be of local Waltham ironstone, on a rubble and limestone plinth, the porch is a Victorian (1893) affair in pretty pink mountsorrel granite, the chancel is a ghastly Georgian red brick thing and the chancel window mouldings are (very oddly) in pink Warwickshire sandstone, if you add in the Swithland slate gravestones, you’ve got a Geology/geography lesson! The fine perp. tower lacks a spire, hower there is an odd little limestone octagonal turret where the spire should be, the excellent CCT guide suggests that the money ran out before it could be erected.
I’d done Beeby back in 2006, when I had just started out on my Church odyssey and the few pictures I took were quite basic, so I’ve been looking for an opportunity to update them. By golly, it was cold inside the open church, the custodian had opened up the N side chancel door, no doubt to let some air in (it was also protected by an old rusty grill), but it also let the chill in. The interior is sparse, in true CCT traditions, but there were some Georgian box
pews and a small 17th C font. I liked the late Georgian carvings adorning the arches, theres a good mixture of Victorian floor tiles and enjoyed the early (1843) Willement east window.