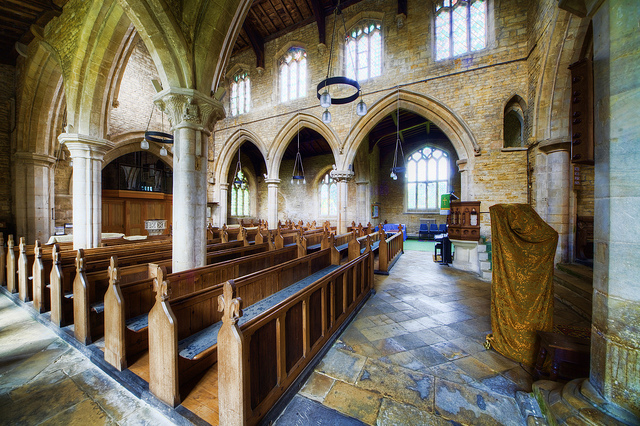 The small village of Wymondham is a few miles from Melton Mowbray in Leicestershire. The village has a close association with Stilton cheese, Mrs Francis Pawlett a resident of the village in the 18th century did much to establish the cheese. She supplied her brother-in-law who was landlord at the Bell Inn at Stilton on the A1. She died a wealthy woman aged 88 in 1808. The cheese was made in the village but during the war in the 1940’s production stopped and did not reappear in the village. Today the population is around 600 and it also has a windmill ex sails which is open to the public at certain times. 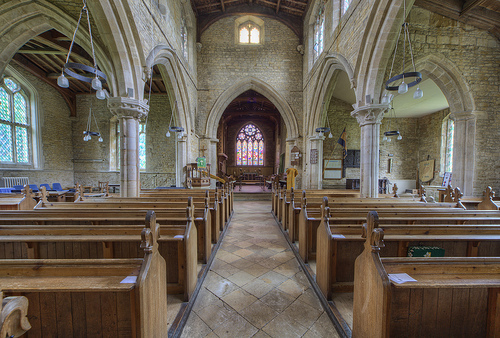 Looking towards the chancel showing the aisles and south trancept

The church has a west tower and recessed spire, nave, north & south aisles, north & south transepts, chancel and south porch. The oldest part of the church is the tower which dates to the 13th century. It has lancet windows below with twin bell-openings above with tracery and quatrefoil heads. The recessed spire was also added in the 13th century with its two tiers of lucarne windows. There are also some gargoyles below the later added parapet. 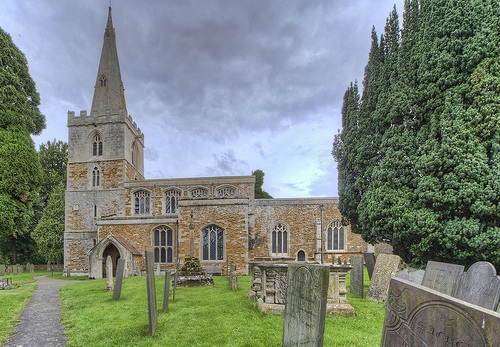 The chancel and transepts also probably date to the 13th century, whilst the aisle arcades may date to a later build in the 14th century. There is a blocked up door in the north wall, and in the north aisle three carved roof corbels with figures to remind the worshippers of the torments of hell. The eastern one shows a man being eaten headfirst by some ravenous beast. There are also others in the south aisle; the central one is again of someone being eaten, his nose half gone with teeth marks on his left cheek and his mouth being pulled away by the beasts jaw. The western one is a woman with an expression of agony. Not particularly pleasant images but I suppose in medieval times these images were used to teach the congregation to live to the teachings of God and if they sinned these images were perhaps to show them what could happen once they passed over to hell. 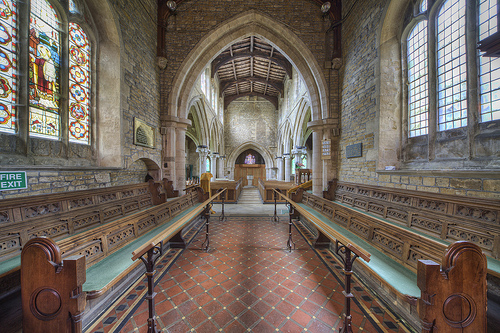 View from the restored Victorian chancel to the west tower arch

There are carvings of four winged angels on one of the south arcades whilst on the north we have displays of heads of cows and sheep as well as humans. In the nave we also have more medieval corbels, we have a shepherd with a lamb and staff, an innkeeper armed with a pitcher, a tailor with cloth and shears and boy sticking his tongue out and holding his mouth apart – were these depictions of local folk around the village when they were carved all those years ago – I would like to think so.
The north and south transepts were perhaps used as chapels in earlier days and in the north transept there are remains of a piscine. The south transept had a chantry chapel founded by William Hamelin in 1290. William gave land in Wymondham, Saxby and Thorp Edmer to a chaplain to celebrate mass in perpetuity on his behalf. By 1553 the chantry was no longer in existence and I wonder how long they continued to say mass with the monies and land from William Hamelin. The south transept was also a burial site to the Day family in the late 18th and 19th centuries.

Part of the rood screen with some fine carving now on display on the church wall.

There were a series of Victorian restorations between 1864 and 1875, my old acquaintances ‘Goddard & Son’ completed a major restoration of the chancel in 1867-8. The east window by W. Slater was added at this time. In the chancel the triple sedilia is worth a mention and the unusual 14th century altar which is triple arched.
In the south transept we have a monument of a large effigy of a knight cross-legged, late 13th century; this was Sir John Hamelin who was supposedly a crusader on three occasions. There is also an alabaster topped altar tomb to Sir Thomas Berkeley (d. 1488) and Petronilla, his wife.

Altar tomb to Sir John Hamelin who was a crusader on three occasions, 13th C

The clerestory is a fine example with eight large windows which allow much light to reach the nave. Most of the glass is clear and throughout the church there is little stained glass work.
Wymondham is a pretty church and is usually open, there are also good walks around the village.  There is a good pub in the village which I can vouch for that does excellent food and there is ample parking nearby. Worth a visit with Edmonthorpe which I have just completed being next door.