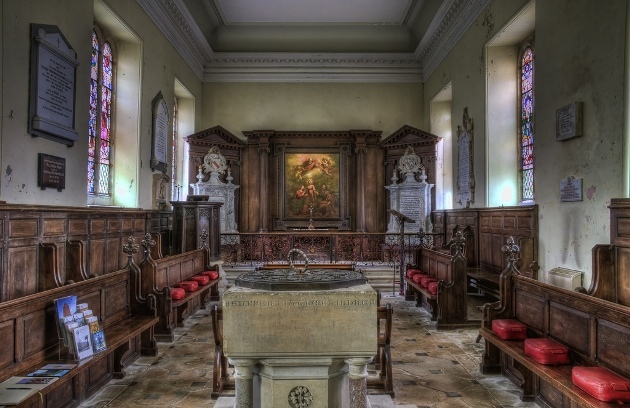 Withcote lies some 13 miles east from Leicester by the crow and is 4 miles south-west of Oakham very near to the county line with Rutland. The name probably derives from the Old English meaning of ‘clump of willows’, it lies in a valley with small hills either side and a small lake lies to the south east.
The chapel is Early Tudor probably finished around the 1530’s by Catherine and her second husband Roger Ratcliffe, her first husband William Smith had started the chapel but died in 1506. It was built to the side of their Hall as a private chapel but became the parish church. 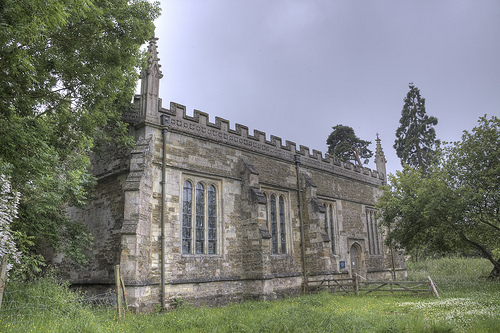 View from north side with 1744 additions, battlements and pinnacles

There were originally two manors at Withcote but by the close of the 15th century these had become one manor under William Smith. There was also a parish church at Withcote in the 13th century but at some stage this disappeared and the chapel became the centre of worship for the parish. The population of Withcote may have been ‘reduced’ by enclosures and that could be why the original church fell into disuse as there were not enough parishioners to support the church – the chapel then became the parish church, this is similar to the to history of Noseley Hall and chapel. 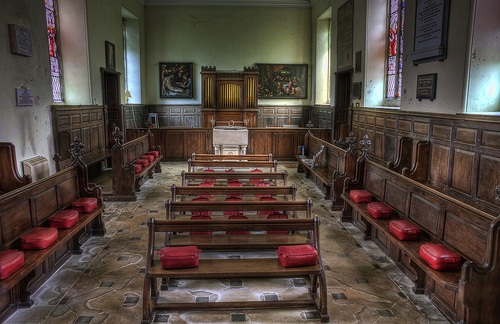 The oblong chapel is made of golden ironstone with north and south doorways with a blocked door at the west end. The chapel underwent restoration and refitting in 1744 which added the battlements, ornate corner pinnacles and parapet. The interior was also altered with wooden panelling around the walls and a painted altar piece with monuments either side to Geoffrey Johnson (d. 1742) and his father Matthew (d.1723), who built the house. In 1865 the chapel was reseated and a new over large font installed.
The fne stained glass dates from the 16th century, probably around 1530 and is attributed to Galyon Hone who was the King’s Glazier in 1517 and did extensive work at Eton college, Westminster, Windsor Castle and elsewhere. 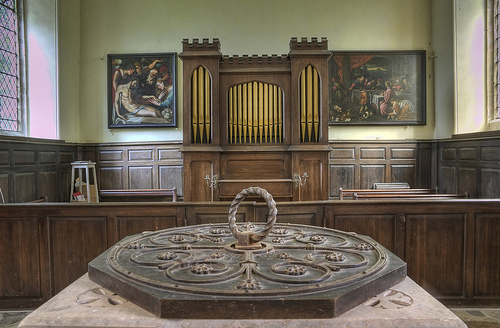 Withcote Hall next to the chapel was built by Matthew Johnson in 1723, Clerk of the Parliament, who married a Palmer (from Carlton Curlieu), it is a grand house now in private hands and undergoing restoration.
The chapel is now looked after by the Churches Conservation Trust and open to the public everyday. I had trouble finding it, but if you find the turn for Withcote Hall, follow the track to the electric gate (push the button to open), and then bear right where the track forks and park in front of the Hall, the chapel is behind some large firs but can just be seen. The vegetation was overgrown around the chapel and not many people seem to visit it which is a shame, it is set in some lovely countryside and is very peaceful – definitely worth a visit. Access for wheelchair users will be difficult due to no path and overgrown vegetation. There are no facilities in Withcote, probably Tilton-on-the-Hill is the nearest place with a public house.