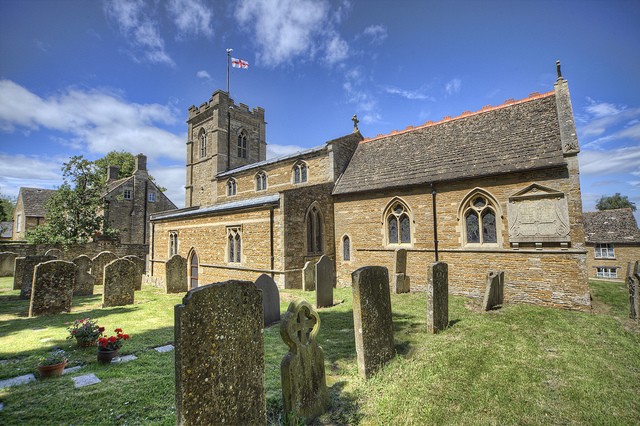 Some three miles north-east of Uppingham is the pretty little village of Wing with its fine stone buildings and location just south of Rutland Water. The church of St Peter and St Paul had a major rebuild by the Victorians but there is still much to admire in this church.
The village is not mentioned in the Domesday Book but may have been one of the outlying berewicks (or hamlets) of nearby Ridlington. However the name may be derived from the Old Norse word Vengi meaning ‘field’ which means it would have been occupied long before the Normans arrived and conducted their survey. The manor of Wing was given by the King to the Earl of Warwick who then passed it to the de Montfort family. In 1165 Robert de Montfort died and his brother passed half the Manor to the Abbey of Thorney in Cambridgeshire and the other half to the Priory of St Neots. After the dissolution they were leased to Sir Everard Digby of Stoke Dry. After his involvement in the Gunpowder plot this passed to the Exeter family who remained Lords of the Manor in Wing although from around 1925 this title has not been in use. 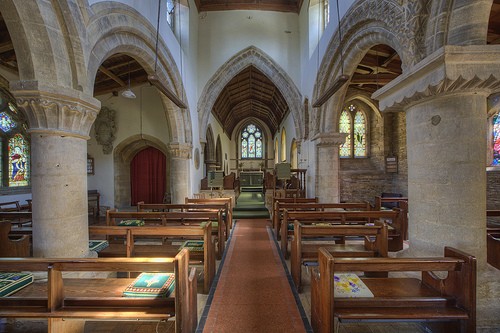 View to chancel with the Norman south arcade right and the later north arcade left.

The church consists of a north and south aisles, north porch, nave, west tower and chancel. The earliest parts of the church date from around 1140, the south Norman arcades date from this period and they are a very fine example of this type of work with the lozenge motif, similar to the arcades at Allexton. 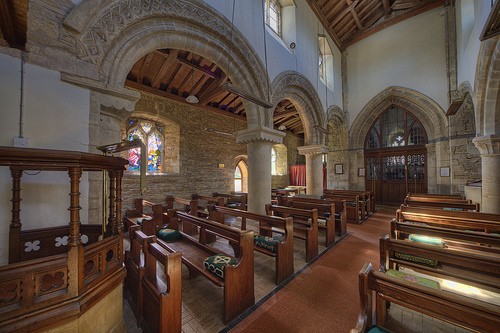 The north aisle arcades date to the later 12th century whilst the tower and clerestory date to the early 15th century. In 1875 the chancel was rebuilt to the Victorian standard and in 1885 the south aisle was rebuilt and the nave restored. There was originally a spire but it was taken down in 1841 as it was unsafe. There were plans to build another but this never occurred. There are no great monuments or plaques, there are remains of some medieval glass in the vestry and it has some interesting newer stained glass. The churchyard is pretty and there are some good stone tombs scattered around and it is all kept in excellent condition. 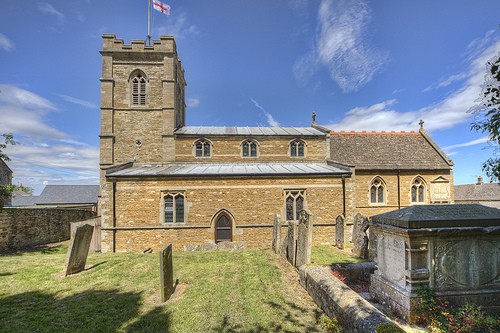 South view of church, there was a porch but this removed in the Victorian restoration.

The village also has a maze which although only 40 feet wide is very ancient. It is sited on the roadside on Glaston Road and is of turf with gravel strips. There are many theories how this originated and it is very similar to some mazes found over Europe. It may date from the early medieval period or even earlier. There is a link to the attached if you wish to read more on these.
The most celebrated inhabitant of Wing was Amelia Woodcock the ‘wise woman of Wing’ who cured many people of disease and even cancer. At first she used herbs and drugs gathered in the woods and fields but later she made up her own concoctions after buying drugs from a chemist. She was visited by the wealthy and even consulted by the medical profession, she became so famous visitors had to take lodgings in the neighbourhood until they could be seen. She died around 1850. 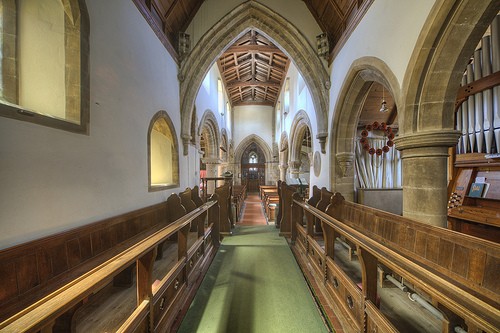 Victorian built nave for all intents and purposes with organ chamber & vestry to right.

I do like the village and the church it is a ‘picture postcard’ village with its sandstone walls and pretty church. There are plenty of things to do in the area with Rutland Water being so close and of course all the open churches in the nearby villages to visit. This church is open which is of course usual for this area. It is a real shame that in nearby Leicestershire most are not open, hopefully this will change and we can wander around these beautiful buildings without finding these buildings locked to visitors.