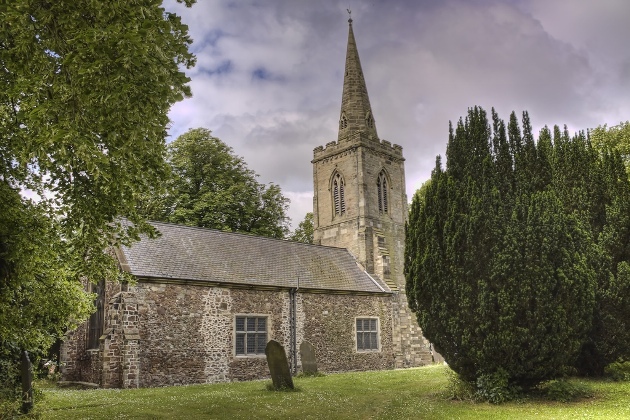 St Wistans in Wigston has shared history with Wistow Church

Wigston Magna has two spires over the town, the larger All Saints on Moat Street and this the smaller church next to the dual carriagway on Bull Head Street. This is the second church dedicated to the Saint Wigstan (Wistan) in Leicestershire, the other being Wistow where a Prince of Miercia (Wigstan) was murdered and human hair was then found growing in the grass near or on where the church was built. Because of this act he became a martyr and his body was transported to Repton in Derbyshire to be placed in the monastery’s crypt. On the way the body and followers stopped overnight in Wigston, and there a small chapel was built to commemorate this event and it became a place of pilgrimage. Thus we have the beginnings of the church at Wigston. 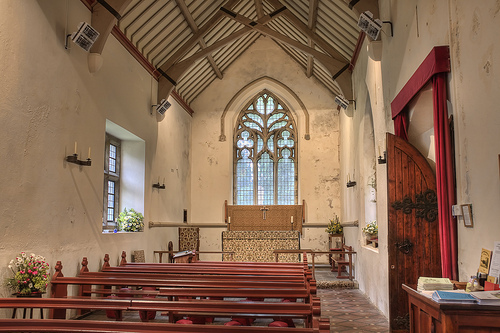 The nave and chancel area, plain but pretty.

In 1086 the manor of Wichingstone (Wigston) belonged to Hugh de Grentmaisnil, who also owned many more manor’s in Leicestershire. There would have been a chapel here already by this time, whether in stone, wood or wattle and daub. By the 14th century the chapel had been rebuilt in stone with a limestone spire and local granite from Enderby. The church was used for services although All Saints on Moat steet remained the main church in Wigston. St Wistan’s did have various periods of neglect and in 1580 the church became the school for the village. Later John Nicolls the travelling historian gives the school a damning report in 1790 on the state of the building, however it continued as a school until 1839, but also filled in other uses such as mortuary house, fuel store, stable, and meeting house of the Congregation of Independents (United Reform Church) in 1682. 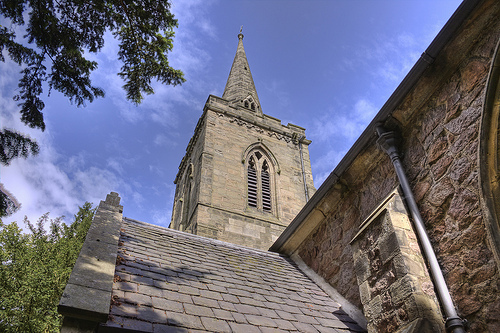 In 1853 work began on restoring the diplatidated spire and nave, and in 1877 the church was reopened and in the form we see now, west tower, nave and chancel with a south porch.
The little church has some unusual square windows in the north nave wall, it is plainly fitted out with white plastered walls and little ornamentation. The church has one bell remaining and no font. The mature trees hide the church from view from the busy road and I expect many people pass it not knowing its interesting history. Access is via a gravel path with no steps, the church still holds services but is not usually open. 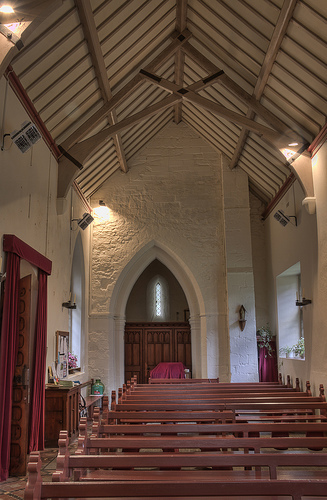 This church with its small nave and plain decor is worth a visit, especially when you compare it to the much larger ornate All Saints, with its fascinating history it is an unsual find in such a built-up area. There is plenty of further information on this church and All Saints in excellent booklets written by Janice Broughton – these are available to purchase in All Saints Church. I would also like to thank the churchwarden for his time in showing me around the two churches in Wigston Magna.