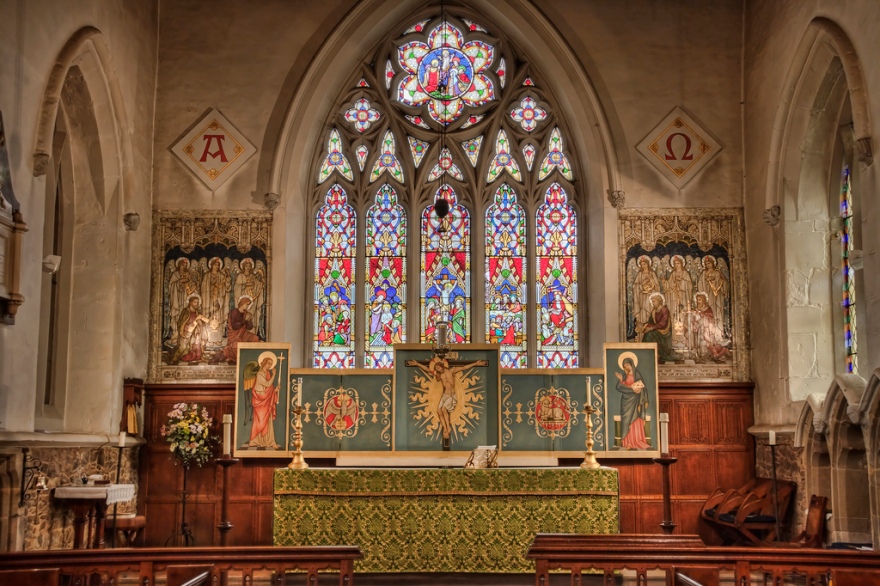 Wigston lies a few miles south of Leicester and the town is now a suburb of Leicester. It has a large population (approx 33,000) and has thriving retail and industrial areas. The church sits in the old part of the village on the high ground, there is some evidence that Wigston was populated back in the 6th century and it is highly probable other structures were built before the present church on the same site. By the 11th century Wigston was already a large village, in fact the largest village in Leicestershire. Wichingestone as recorded in the Domesday book was owned by Hugh de Grentmaisnil a lieutenant of William the Conqueror who was rewarded with much land for his services. 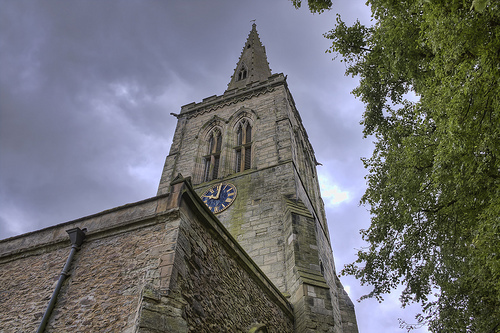 Soon after the Norman Conquest the previous Saxon church was probably replaced with a stone structure, however the present fabric mostly dates from the period 1280-1320. Like the other church in Wigston Magna, St Wistan’s, the church is built of Enderby granite whilst the spire is made of limestone and the tower of ashlar. The medieval gothic church is large, in fact I was very surprised by the size of the building, it consists of a west tower with spire, nave, chancel, north and south aisles, sacristy, south porch (now filled in), north porch and organ chamber built on south wall (added 1903). The north aisle is used as a Lady’s Chapel and has a plain 12th century arch, at the west end of the aisle is an Italien Marble font from 1781 the original medieval font’s demise is unknown. 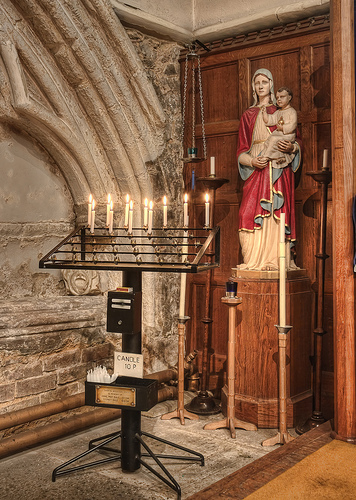 The tower has a fine west door with mouldings from around 1300, the crenellated tower has eight bells and it is topped by the tall spire, in fact Wigston Magna’s two spires (the other being St Wistan’s) can be seen for many miles. In the 14th century a clerestory was added to the nave in order to add more light. The nave is large with a colourful painted roof and timbers, there are plenty of ornate decorations scattered throughout this large building, which is so different to nearby St Wistan’s. In the south aisle lies a chapel to St John, there is a piscina in the southern wall of the aisle for the priest to wash his hands before mass. 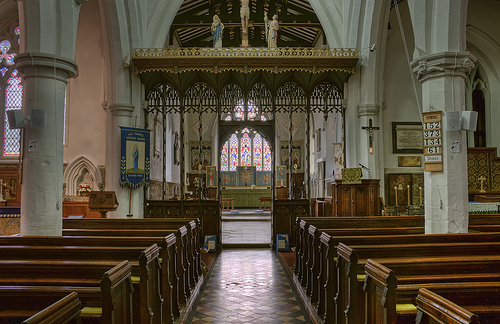 View to the chancel with its grand rood screen

The chancel was restored in 1902-05 when the roof and walls were raised as well as a organ chamber built. The entrance to the chancel is dominated by the late medieval rood screen with its intricate carvings and figures atop makes a dramatic statement of showing the boundary of the parishioners and clergy. 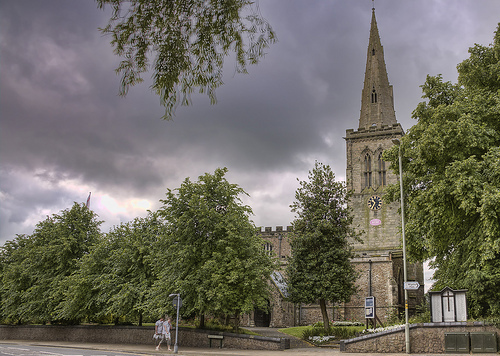 The north side of the church hidden by trees

The east end of the chancel (santuary) has a fine stained glass window (from 1904) with an ornate high alter and two colourfal wall mosaics either side. There is so much to see at the church that I could double this desciptive space and still need more room! There are some excellent booklets (very indepth and informative) by Janice Broughton for sale in the church which are well worth a read. The church is in regular use, and open I think for periods of the week and weekend’s when services are held. 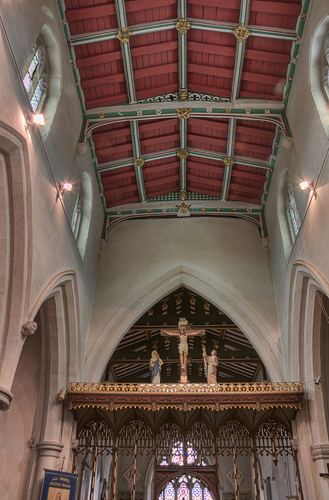 Access is good with a small disabled parking area on Newgate behind the church. I do really like this church it is an impressive building inside and out and I would recommend a visit. I could have spent hours in there taking pictures and talking to the wardens, but I had another appointment to keep. My only problem was getting a picture of the whole of the outside of the building as it is surrounded by trees and roads. I am also missing my wide angle lens at the moment due to an accident. So these are the best outside pics I could get. I am looking at returning here in the winter (as with other churches surrounded by trees) to get some better outside pics, and I hope to visit inside again and enjoy the peace and beauty of this lovely church.