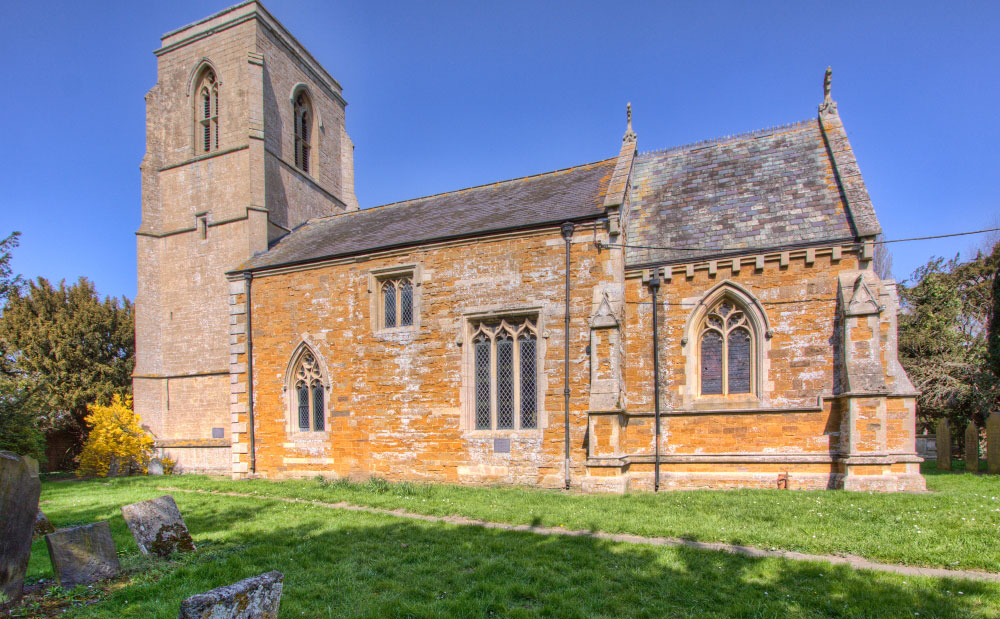 The church dates from the 15th century with some ealier fabric, the chancel later

Welham lies 4 miles north-east of Market Harborough and the river Welland runs nearby to the south of the village which forms the county line with Northamptonshire. It is a now a very small village of one street, in earlier times (as in most rural villages) the population was higher, in 1603 the village had 86 communicants. Today the population is below 50.

The church sits apart from the current village and it is probable that the medieval village lay to the south of the church. The buildings to the north side of the road date to 1720 when a Francis Edwards who was lord of the manor completed a major rebuilding program in the village. 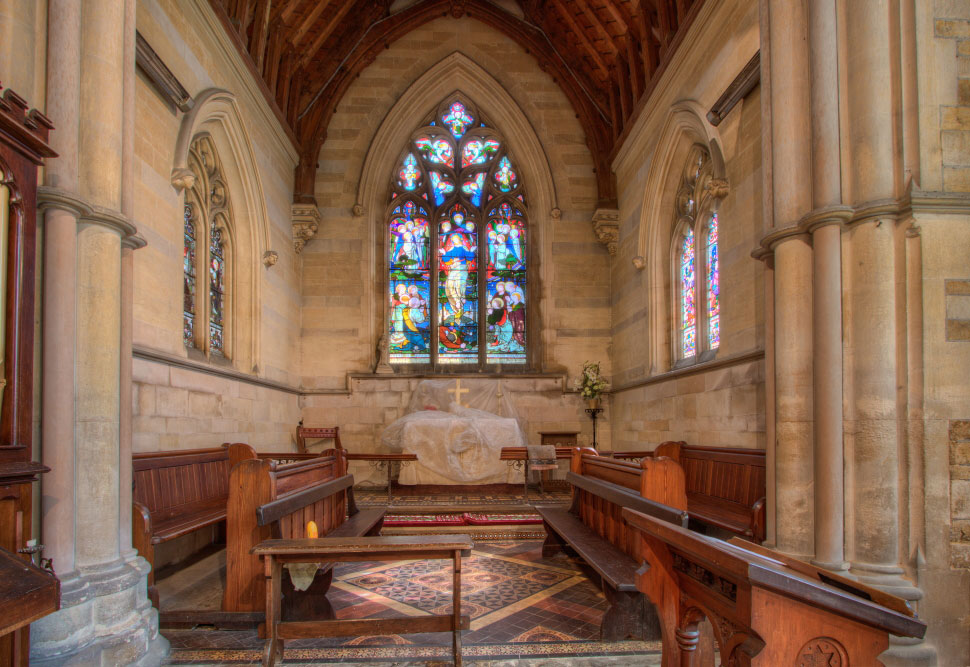 The restored chancel of St Andrews at Welham

Welham was recorded in the Domesday book and the name is probably Saxon in origin. A Richard Bassett included the church of Welham in an endowment to Launde Priory before 1125. They held the property until the dissolution when it reverted to back to the manor of Welham and the Halford family. In 1717 the manor came into the hands of Francis Edwards. Mary (d. 1743), the daughter of Francis Edwards, bore an illegitimate child by Lord Anne Hamilton (he was named after his fathers godmother Queen Anne) which was christened Gerard-Anne Edwards (d. 1773). This child succeeded to his mother’s property at Welham and married in 1754 Jane, sister and heir of Henry, 6th Earl of Gainsborough (d. 1798). Their son Gerard Noel Edwards, afterwards Sir Gerard Noel Noel, Bt. (d. 1838), in 1798 inherited Exton Park and the Noel estates in Rutland. He married Diana, Baroness Barham (d. 1823), and was succeeded by his son Charles Noel Noel, who in 1841 was created Earl of Gainsborough. The latter in 1854 sold the manor of Welham to William Ward Tailby (1825–1914) of Skeffington Hall who already owned a small estate in the parish. 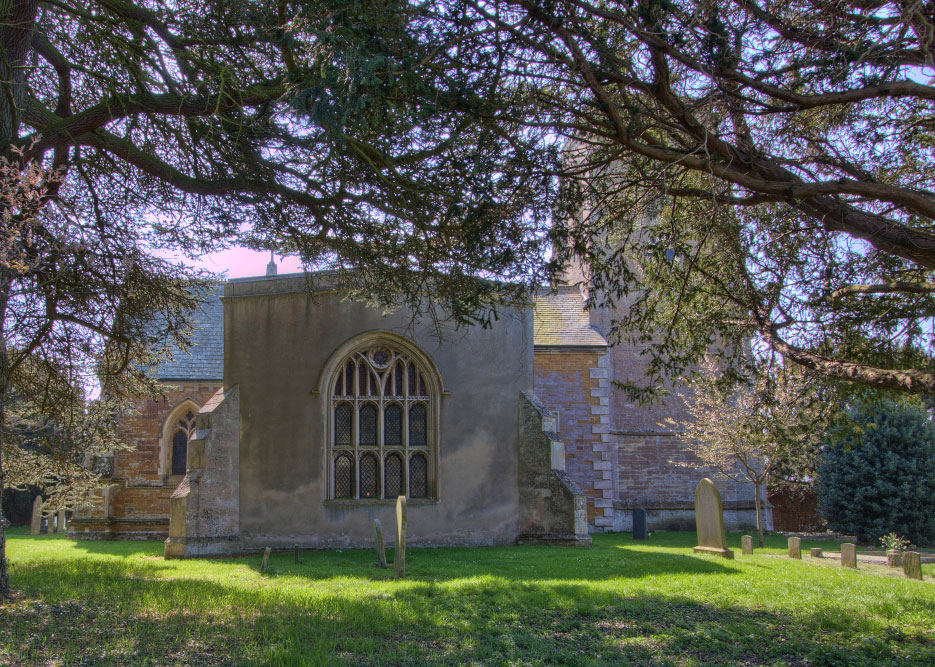 The north trancept added in 1810 to house the Edwards monument

The church has a west tower, nave, chancel and the north mausoleum which houses the Edward’s monument. The 62ft tower dates from the 15th century with four stages marked by horizontal stringing. On the top is a weathercock erected in 1854, a hole in it was reputedly caused by a German aircraft attacking the railway sidings (now gone) during World War II. The entrance to the church is via the west doorway through the tower. The lower parts of the nave may date to the 13th century, but most of the nave dates from the 15th century when the clerestory was added. There would have been a window where the north trancept now stands. The chancel was restored in 1720 by Francis Edwards, the nave walls were repaired and the chancel rebuilt. Outside the church on the site of the former chancel a burial vault for the Edwards family was excavated. 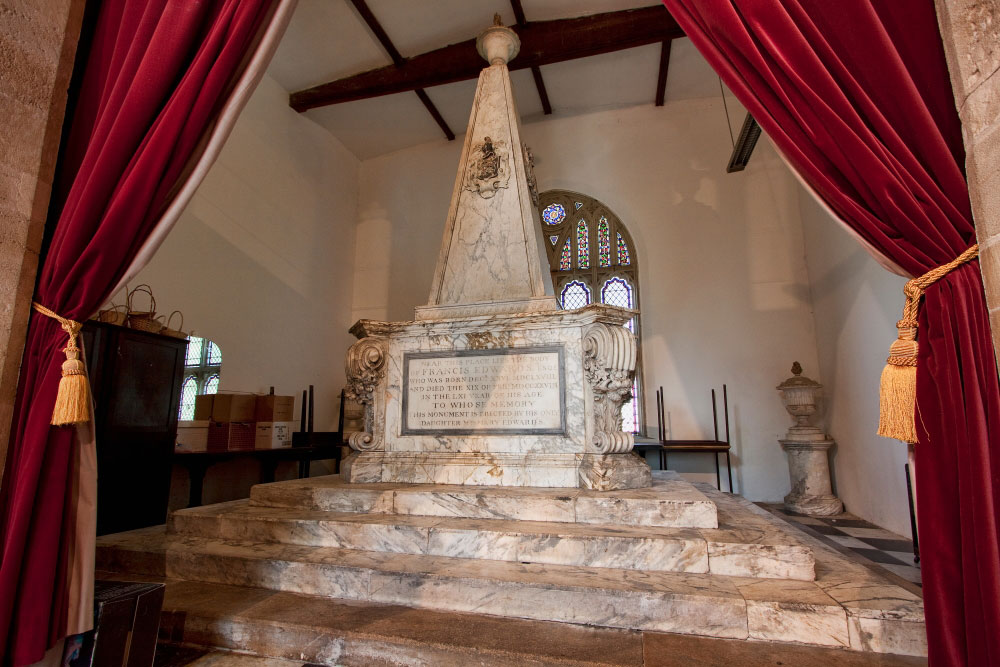 The Edwards Monument which was orginally outside is an imposing sight

Above it a monument was erected to Francis Edwards (d. 1729) by his daughter Mary. It consisted of a marble tomb placed on four wide steps and surmounted by a tall obelisk carrying a marble urn. It stood within a small enclosure, paved with marble slabs and fenced with an iron palisado, with four large urns on pedestals in the corners. Due to the weather the monument became damaged and in 1809 Sir Gerard Noel Noel, grandson of Mary Edwards, ordered it to be dismantled and repaired, and a new transeptal chapel to be built on the north side of the nave for its accommodation. Sparrow, the Stamford mason who was charged with repairing the monument, was also employed to build the chapel, which was completed in 1810. Access to the chapel was provided by an arch in the north wall of the nave. The monument is a large freestanding obelisk with an urn at the top, there are no figures but the monument is an imposing sight. 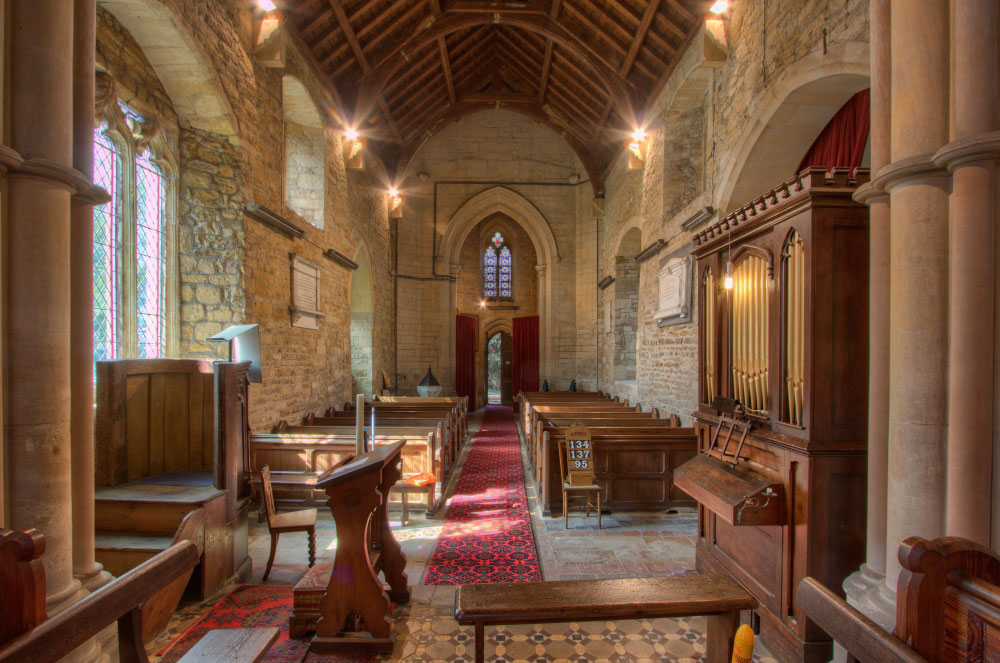 From 1868 to 1870 the Goddards of Leicester restored the church and during this work a silver coin of Edward II was discovered under a foundation stone of the ancient chancel arch. The font is 18th century, there is a royal coat of arms of George III dated 1778 in the west tower.
There is parking outside the church but the church is usually locked. There is the Red Lion in the village for refreshments and there are plenty of good walks in the vicinity.