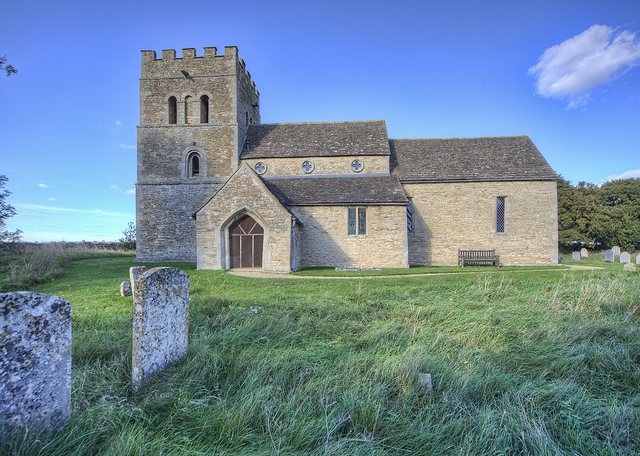 This little church is in a beautiful position away from the village along a field track by the River Welland. Now there are two things you need to know when wanting to visit the church. On entering this small hamlet you will see a sign pointing to a house stating ‘church key’. You cannot miss the house it is the large 17th century building with a gate. By the front door is a hook and on there you will find the key. If it is not there you can presume that someone else is at the church. Please of course return it on your way back.
The second point is that the church cannot be seen from the village, it is nearly ¾ mile along a track through Manor Farm. I would suggest you park the car in the village and take a walk along to the church. You can drive there but the track is very rutted and if you have a low car you may ‘bounce’ along so take care. 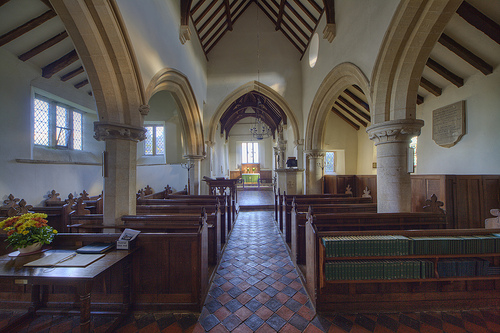 The village was mentioned in the Domesday Book when it was part of the Kings Manor at Ketton. The Bishop’s of Lincoln acquired the manor in 1104 but they gave it to the Abbey de Cluny in around 1130. The Manor of Tixover eventually passed into the hands of the Dale family during Henry V’s reign. The title later passed to the Stafford family of Blatherwick then eventually to the O’Brien’s who sold all their holdings in the 1970s. 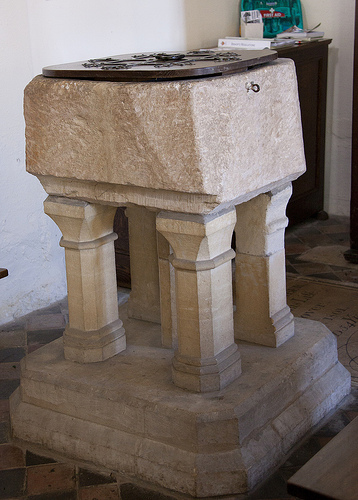 St Lukes sits apart from the small village now although in earlier days the main part of the village was to the north of the church, whether through plague or better road links the village migrated north-east. There is also some indication that in earlier times the church was dedicated to St Mary Magdalene and in fact Nicholas Pevsner names the church this way in his ‘Buildings of England’ entry from the 1960’s. The church has been known as St Lukes but when it was changed is unknown. 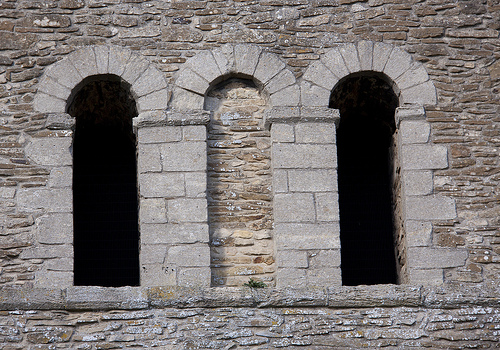 The church consists of a large west tower, north & south aisle, nave and small chancel.
The massive tower has some beautiful arched bell-openings sitting on square pillars on the top stage. The south set has zigzag carvings inside the shafts and arches. This Norman tower dates to the early 12th century and it is an impressive structure, the battlemented top may have been added later whilst the bell tower houses one medieval bell inscribed; ‘Sancta Fides Ora Pro Nobis’. 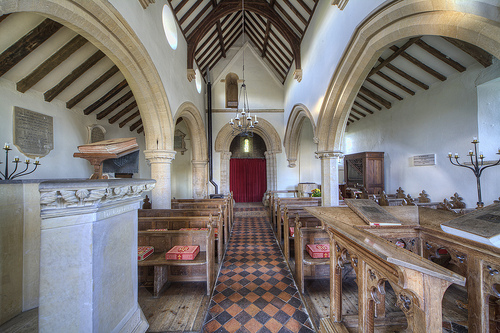 View down nave from chancel arch towards west tower

The chancel and nave date to the early 13th century; this replaced an earlier structure but kept the dimensions of the nave which is unusually shorter than the chancel. The plain design with the slit windows is also very attractive. There is some controversy with the dates of these windows, Pevsner dates them to the Tudor period but there is some thought that they may be 13th century. I will keep council but if I had to make a decision I would go with a Tudor date. 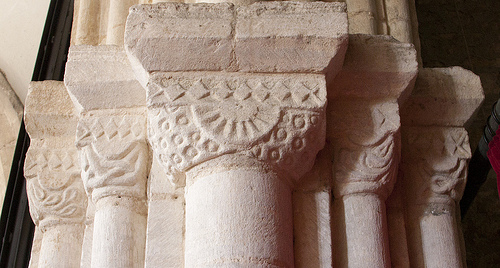 There is a blocked north doorway also probably 13th century with a pointed arch. The clerestory on the south side only has three round cruciform openings which are Victorian, this has resulted in the south aisle roof being lower the north aisle. The south porch is 15th century leading to a 13th century door which has shafts with waterleaf and stiff-leaf capitals and an arch with keeled roll and a nutmeg motif in the hood mould. The aisle arches and capitals have some carving, the north aisle being built slightly later than the south. The font is 13th century, the pews with poppy-head ends are Jacobean and the stone pulpit dates to 1859. 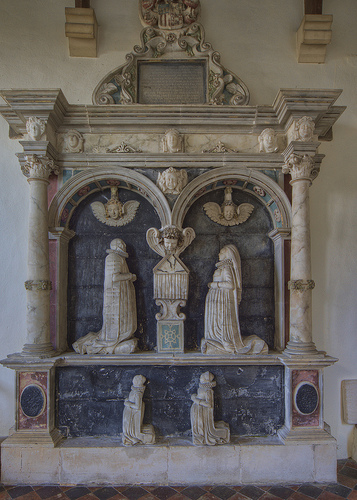 The monument to Roger Dale who died in 1623

In the chancel we have the original stone seats running along the chancel walls, the southern bench has been shortened to make space for the Dale monument. This grand monument for a church so small was erected by Margaret, the third wife of Roger Dale to commemorate his life following his death in 1623. The monument shows Roger Dale and Margaret kneeling on either side of a prayer desk under rounded canopies with columns and inscriptions. On the base are the kneeling figures of their two daughters. All their hands have been chopped off and the head of one of the children is missing but is still is an attractive monument. 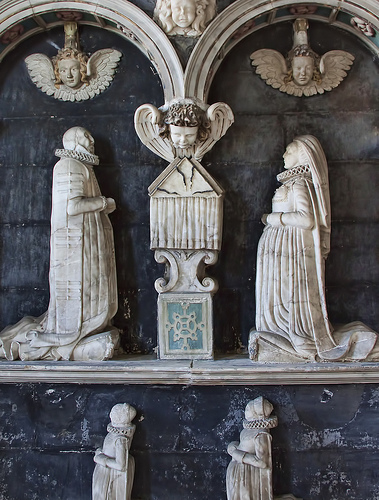 Detail from monument to Roger Dale

Many monuments and other church pieces were vandalised during the Cromwellian period, but I have also heard that alabaster was taken from churches and monuments to be ground down and used as a cure for a certain sheep disease – if anyone can give any information on this it would be interesting.
Tixover is a fine little church in a beautiful peaceful location away from the village and the nearby busy A47. I will return here many times I hope as it is a beautiful little church with some fine features and good views over the River Welland. There are some interesting graves in the churchyard but there are no facilities in the village itself, but plenty in nearby villages.