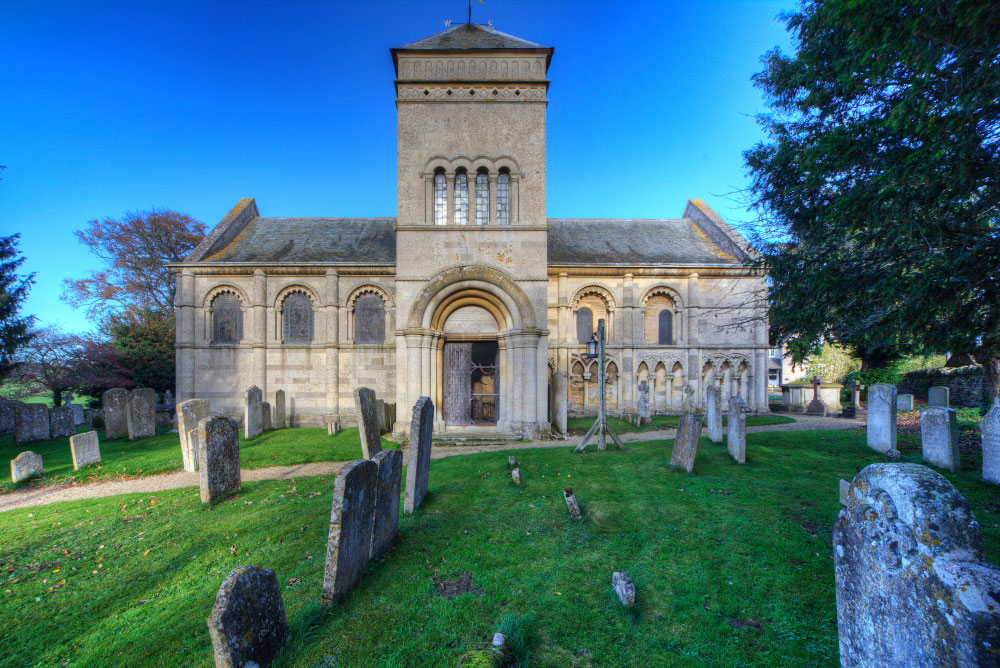 With a population of around 70 people this small village is a few miles north-west of Stamford next to the busy A1. The name derives from the Saxon Ticcen and Cote, meaning the place where goats and kids were herded when the country around was forest. The village lies on a slope from the Great North Road to the river Gwash below. 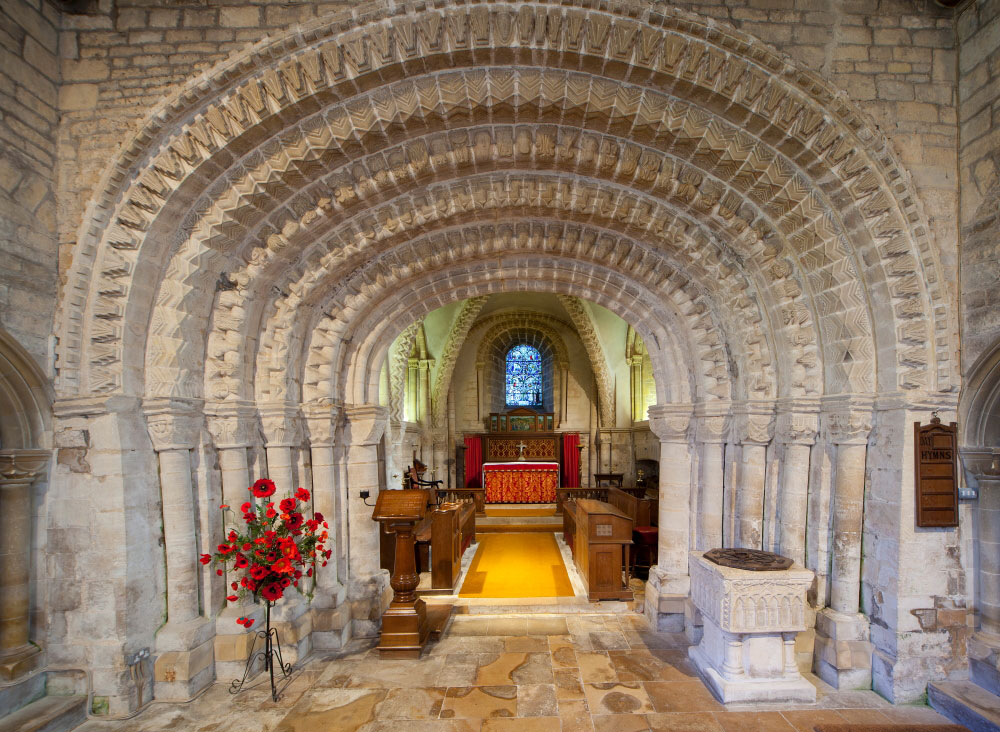 The magnificent Norman arch at Tickencote

At the time of the Domesday survey the manor was held by the Countess Judith and it passed eventually to the Wingfield family in 1594. You can read more information on the village history, the lords of the manor and other data by following the link to the British History site. The Wingfield family made a great impression on the village and also built the Hall in 1705 which was designed by Sir John Vanburgh this was unfortunately demolished in 1950 and only the stable block survived which was converted into a country house and is now Tickencote Hall itself. You can see some pictures of the original hall by following the link here. 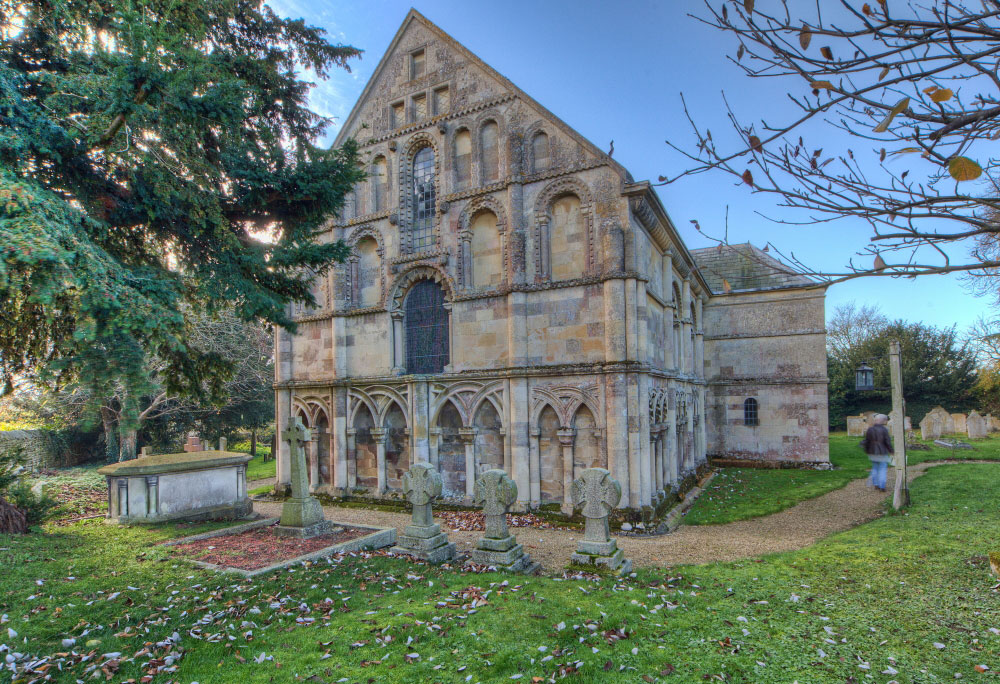 View of the east facade with its arcading and columns a truly remarkable building.

Now we come to the main point of this ‘potted history’ and that is the church of St Peter. The church is situated by a corner in the road with a coppice to one side. As soon as we arrived I noticed that this was not going to be a ‘normal church’ but something special. The amazing exterior mostly dates from a major rebuild by Miss Eliza Wingfield in 1792 by Samuel Pepys Cockerell after the 13th century nave became dilapidated. At this time the chancel was rebuilt but kept the original late Norman design. They also added a vestry on the north, a pretty tower to the south and a porch. There is a rare priest’s chamber above the chancel roof but the steps to this which were built into the north-east corner of the chancel were removed in 1792. 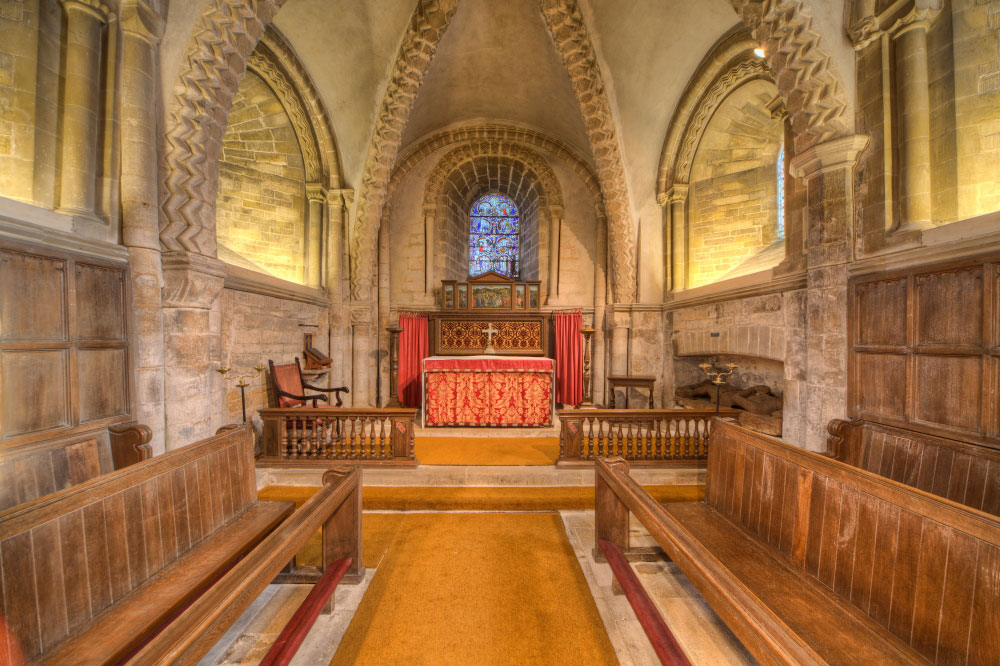 The small pretty chancel with the fine vaulted roof.

So the layout is a nave, chancel and south tower with porch. The exterior of the church has rich ornament with fine mouldings and arcades to admire. The 18th century nave was built on the foundations of the original Norman nave and follows its plan. In the rebuild of 1792 great care was taken to ensure the external fabric was copied as much as possible and they did a fantastic job. The east wall of the chancel has original 13th century arcades and carvings below the window with later work above. On the south side of the church are some arcades from the work of 1792 where once there stood the Chapel of the Holy Trinity which has now gone. 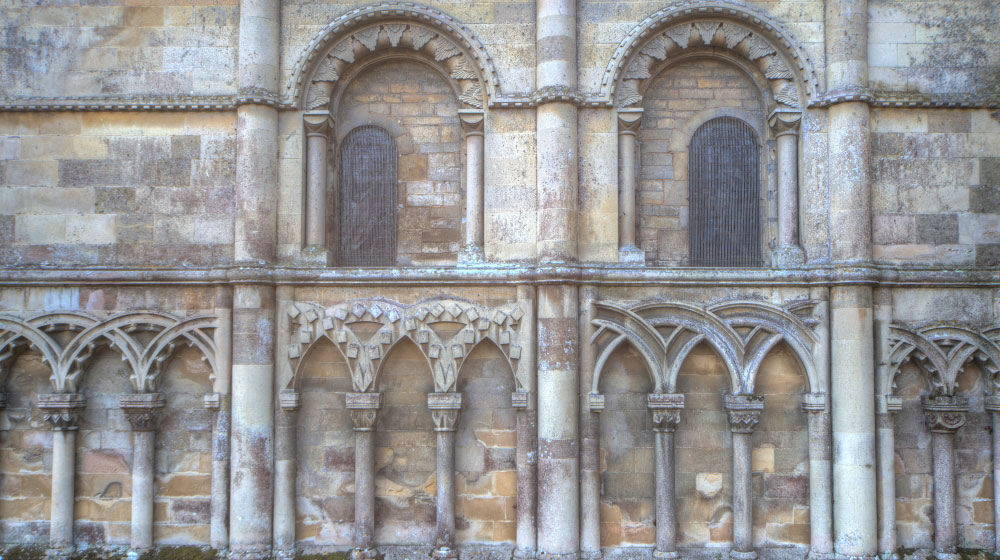 On entering the church your eye drawn to the impressive chancel arch which is why this church is justly famous. You are best to walk down the nave a few steps and then turnaround to get the full effect of this magnificent sight. Built in 1130-1150 this comprises a quintuple archway which is like a layered cake with one archway on top of another each with its own design running along its length. From the outside in we have; billet hoodmoulds, then a stepped abstraction of beak-heads, next a lozenge pattern, then we come to a selection of animal heads, leaf and human figures, green man etc, we then have an arch of crenellation, then a fine archway of beakheads followed last by mouldings. It really is a most impressive sight. The chancel arch leans towards the nave slightly and has ‘slipped’ down on one side. The walling above the arch is over seven feet thick and all that weight and years has distorted the arch but this does nothing to distract you from it. 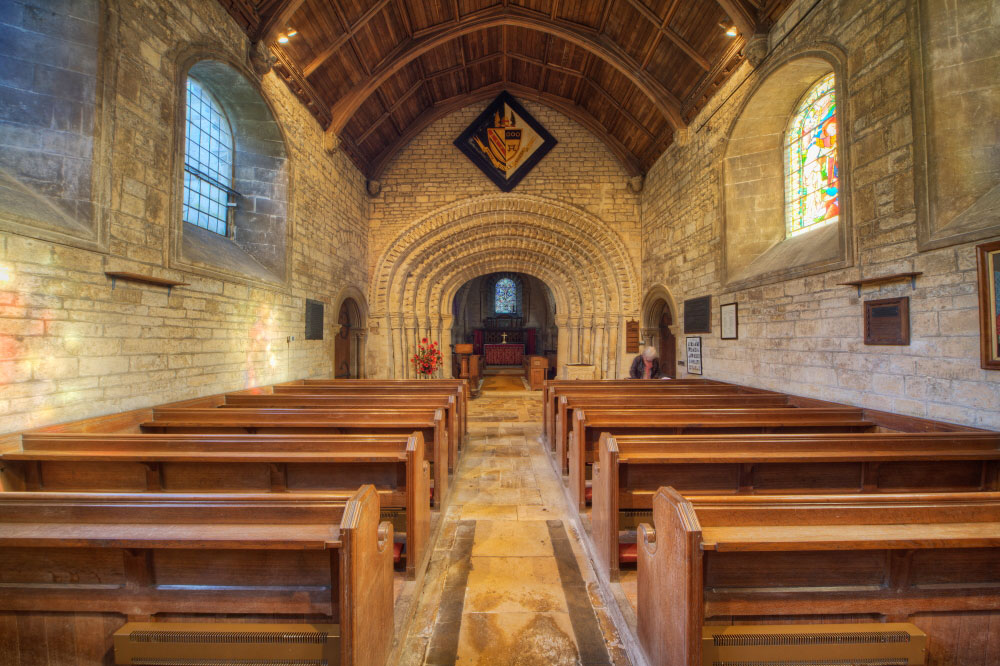 There is some conjecture and evidence that the original Norman church was a single cell building and the chancel arch was in fact the main entry to the church – it would have made a most fantastic entrance. Later when the nave was added in the 13th century it thankfully protected the arch from the elements. Take your time looking at the arch and then head into the small chancel which also has much to admire. The vaulting is of considerable interest with the fine Norman boss in the centre and the sex-partite design (six arch basically), this Romaneque work is very rare and although it was rebuilt in the 1792 work they kept the original design and fabric. In the south wall of the chancel is a wooden effigy of a knight believed to be Sir Roland de Daneys who fought at in the French Wars. He was knighted at Carcassonne in 1355, originally it was probably covered in brass. 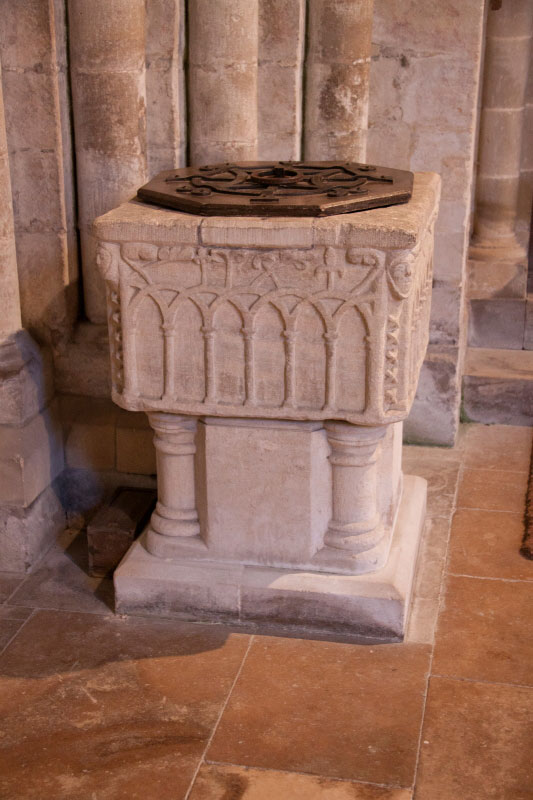 Norman font by the arch

The nave is plain and this is probably what an early Norman church would have looked like with its rectangular nave and small chancel. The font is 13th century and although dwarfed by the great arch it is worthy of examination with its fine dog-tooth carving and arcading.
The church is set in a pretty village and there is parking but no other facilities although there are plenty around the surrounding villages and nearby Stamford. The church is open every day and is of course worth a visit. This church will be in my top twenty when this is updated next year it is one of the highlights of the counties and I shall be back, ensure you visit you will not be disappointed.