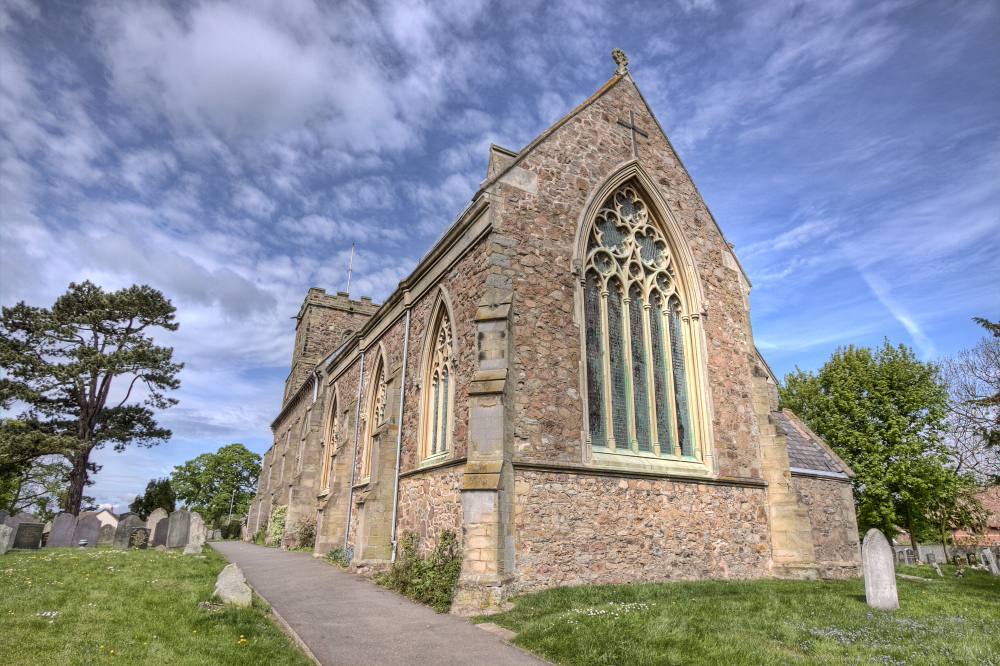 All Saints at Thurlaston a fine church with interesting monuments

The pleasant village of Thurlaston is located eight miles south-west of Leicester, its nearest neighbours being Earl Shilton and Huncote. It has been overlooked by large developments thankfully and the church is placed in the centre of the village. All Saints church was probably built in the 12th Century by the Champaine family, part of the north aisle was set aside as a burial place for the Turviles and was known as the Turvile Chantry. The Turviles or Tuvilles came across with the Normans during the conquest in 1066 and were given several manors in Leicestershire. The monuments in the north aisle consist of a low altar-tomb to Hugh Turvile, who died on the feast of St Denis 1340, and his wife. Hugh is bare-headed, with a hood folded over the shoulder. 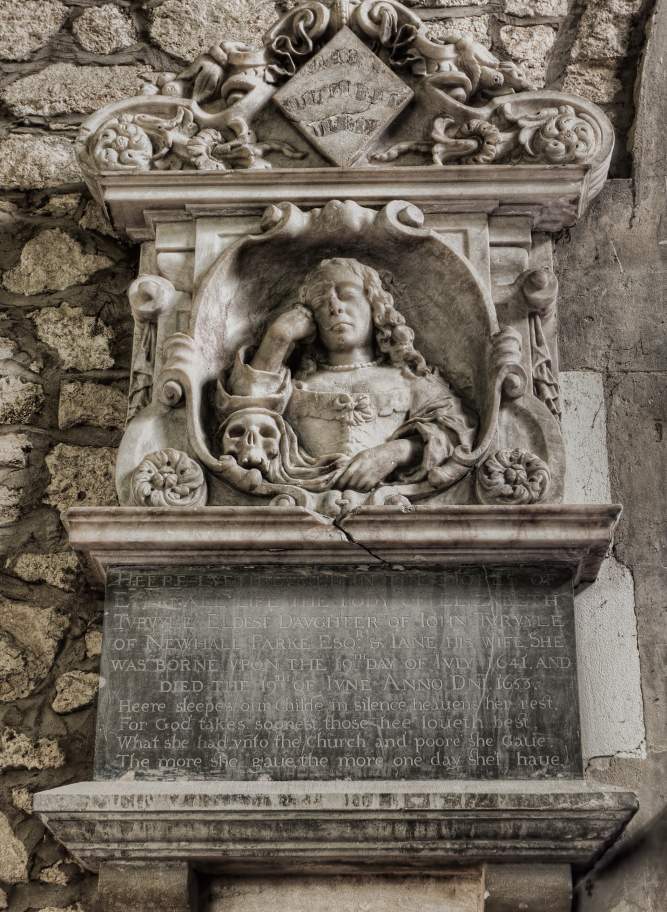 The body clothing consists of a long belted over-tunic and an inner tunic. The hands hold a heart. At the feet is a mutilated animal, perhaps a dog. His wife only has her head and upper torso showing and her feet. An inscription in Norman French next to his wife reads: “Here lies Agnes Turvylle, who died on the seventh day of July in the year of our Lord Jesus Christ one thousand three hundred and forty nine (1349) ­ on whose soul may God have mercy”. The coats of arms of the Turviles are cut into the ‘body’ of this lady. There is also a praying figure in a big open ogee recess cross legged which may signify he fought or put monies toward the crusades. Lastly there is a nice tomb chest with shields and angels on the sides. On the wall a bust of Elizabeth Turvyll died 1653 her cheek rests on her hand and her elbow on a skull. 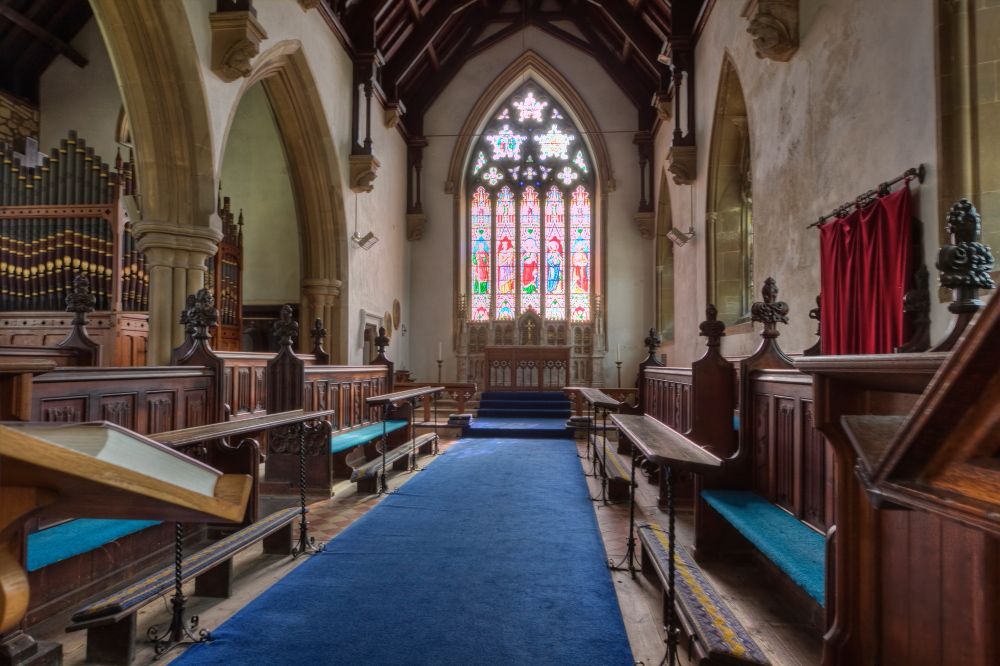 The chancel rebuilt in 1850

The church now consists of a nave, chancel, tower and a large north aisle. In the 18th Century there were major changes to the structure of the church, and a south aisle was removed and the nave walls lowered and a slate roof fitted. There are still remains in the north nave wall of the rood stair. Entrance to the church is through the west tower and on the first floor of the tower the ringers platform can be seen from the nave and chancel, the bell-ringers platform gives a good view of the inside of the church and they have a beautiful stained window behind them. In 1850 Stephen Fry (who we will meet again and I do not mean the TV presenter) renovated the chancel and north aisle, and in 1861 the chancel arch was rebuilt.

In 1825 lightning struck the bell tower and a wall plus some bell frames were damaged. In 1876 the old ring of three bells were changed to a peal of five and they were first rung on Feb 12th.
The church is usually locked but there were contact details and notes of services. Access is either via the west gate by the recreation ground, or via the east entrance and a flat path around the church. There is a small area to park cars just after the ‘Poachers’ on the left hand side. Wheelchair access is fine with no steps or steep inclines. 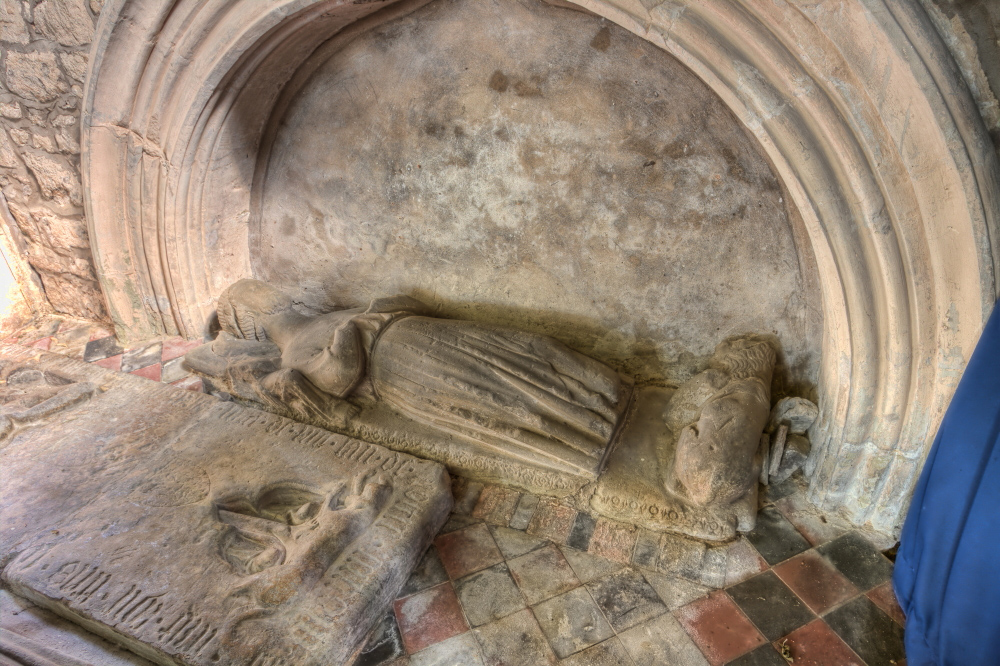 Turvyll Monuments in the church

There are two public houses in Thurlaston, the Poachers is across from the church whilst down the lane is the Elephant and Castle. There is also a garden centre on the road out to croft with a small cafe. The church of All Saints is a fine building with some very interesting features and monuments and should be on your list to visit. I must thank the churchwarden who gave me access and valuable information on the church, I am sure I will be back on an open day to again admire the building.