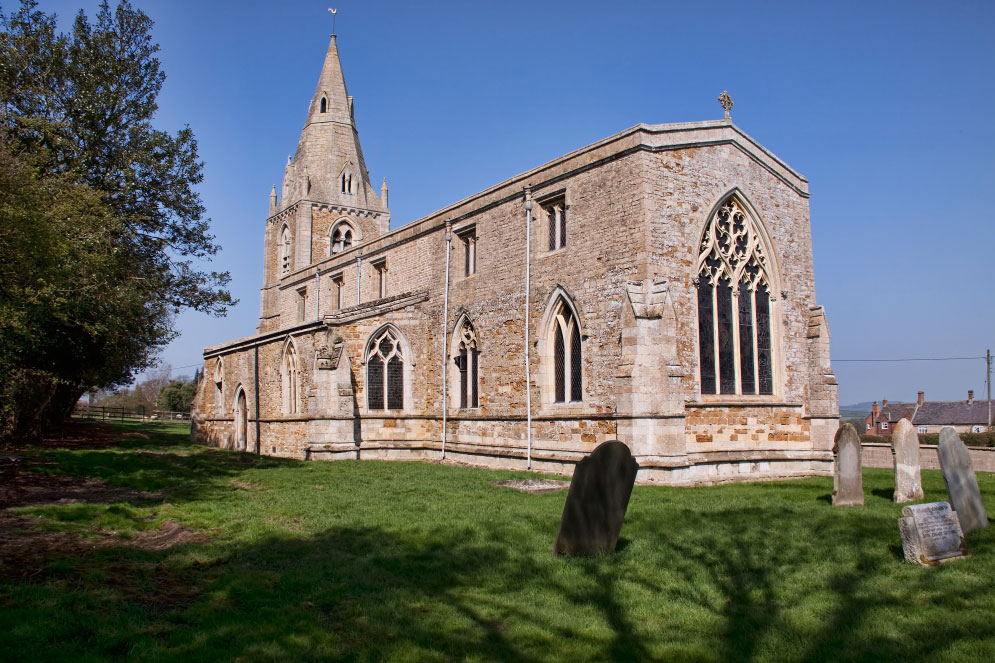 The beautiful church at Thorpe Langton

Four miles north of Market Harborough is the small village of Thorpe Langton, which means ‘long town’ from the Anglo-Saxon.

In the early 19th century the census returns reported 215 people living in the village in 1821, this gradually declined to 83 in 1881 but has increased to nearly 150 as recorded in the 2001 census.
The church at Church Langton was the mother church of the chapel at Thorpe Langton, and both of them were granted to Leicester Abbey in the 12th century. There was no resident rector at Thorpe Langton but by the 19th century it appears to have been customary for the rector’s curate, living at Church Langton, to serve Thorpe Langton. 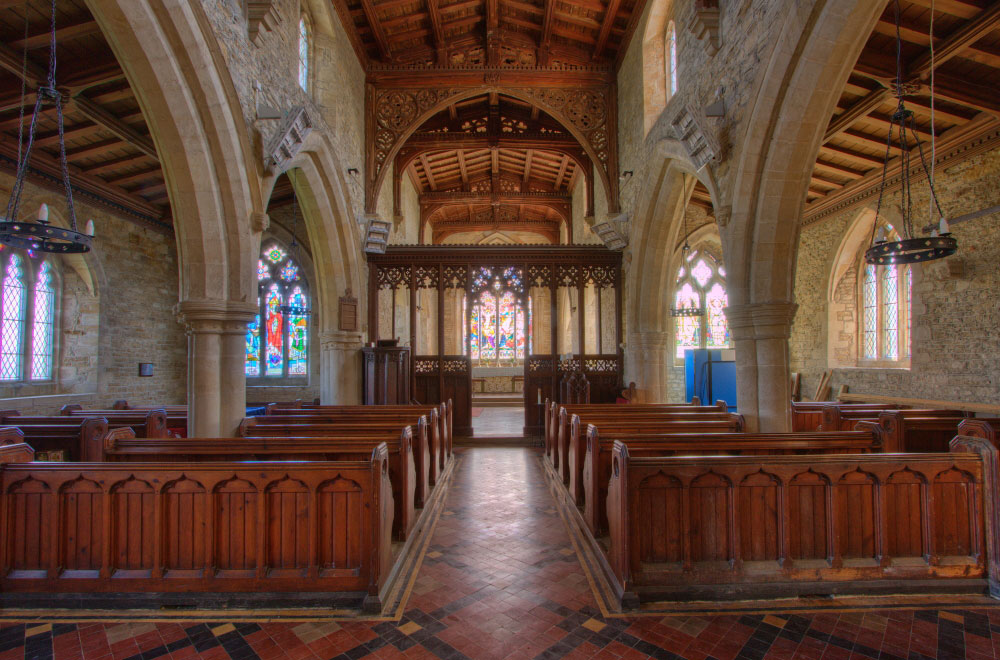 There was no burial ground until late in the 19th century, as the rights of burial remained with the mother church. As at Tur Langton, the inhabitants in 1832 petitioned the archdeacon that the yard in which the chapel stood should be consecrated. After a restoration in 1868 by Joseph Goddard the reopening was reported by the Leicester Chronicle and Leicestershire Mercury where it was stated (15th Aug 1868) that the churchyard was not at that time used for burials and the question was asked, ‘why might not this ground be consecrated and used for burial…?’. The earliest memorial is dated 1875 so it appears that burials in the yard did not commence until some 43 years after the petition to the archdeacon and 7 years after the newspaper article. 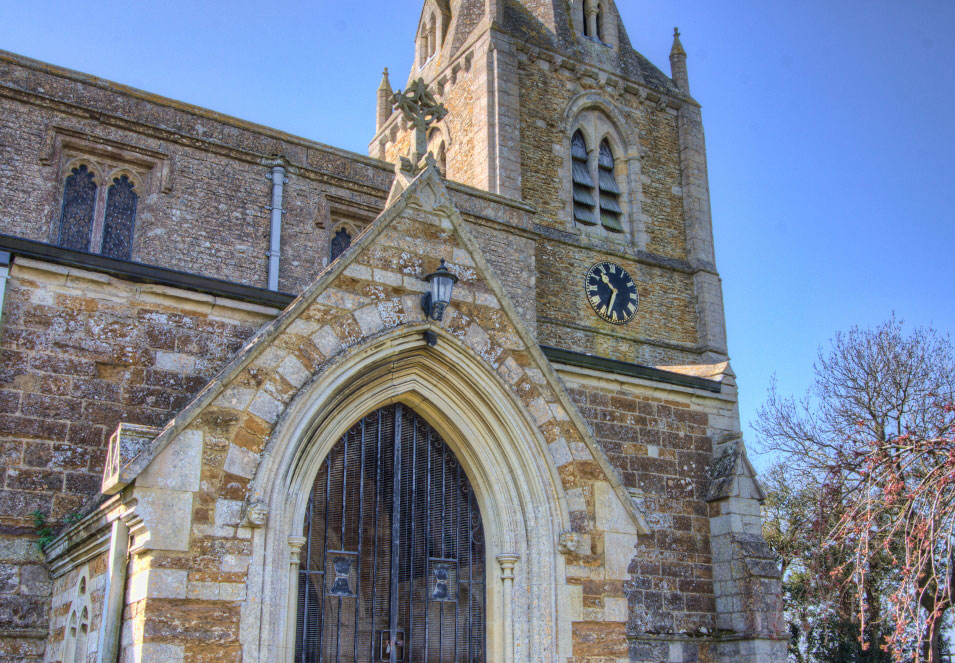 The present church dates from the late 13th and early 14th century. The west tower with its broached spire and pinnacles probably dates from the late 13th century. The church consists of a north & south aisles, nave and chancel. The clerestory was added in the late 15th century to both nave and chancel, and with it a low-pitched roof. The pitch of the earlier nave roof is visible on the tower. The junction of earlier masonry with that of the clerestory in the chancel and the disproportionate height of the east window in the south aisle both suggest that the side walls may have been lowered before the clerestory was added.

Joseph Goddard completed a major restoration in 1868. Under Goddard’s direction the porch was moved from the south side to the north side. It is, however, doubtful whether the north aisle was actually rebuilt, but a great deal of other work was done at that time. Stanyon of Market restored the stone work of the whole church, rebuilt the east end of the chancel and made an excellent job of restoring the 15th century font. Loveday of Kibworth installed a new roof to the 15th century design, restored the ancient pulpit and rebuilt the screen using old oak salvaged from the roof, making it an interesting example of local craftsmanship. 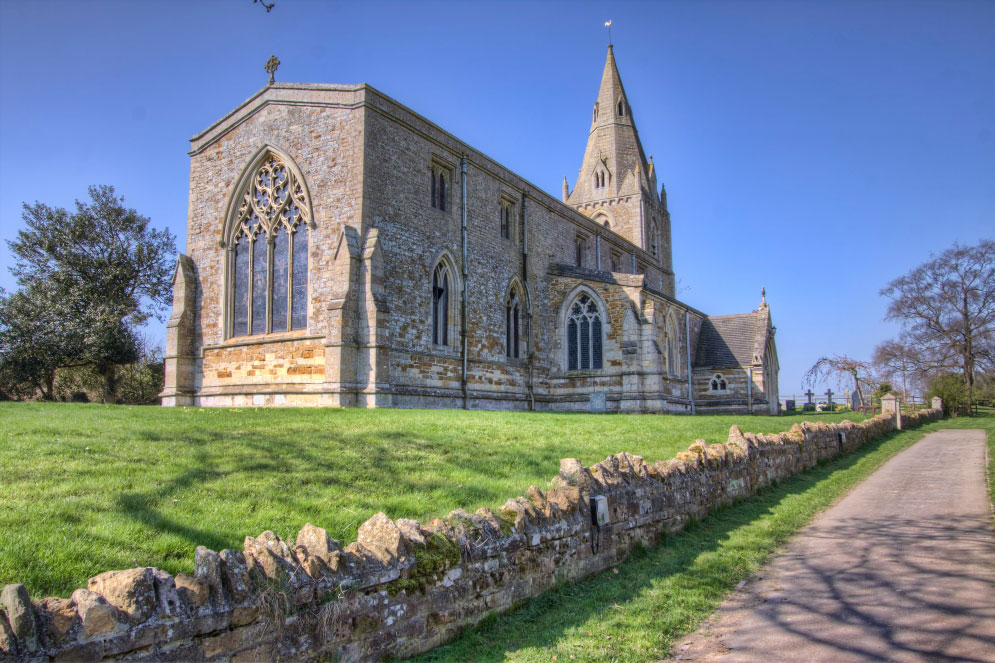 The view from north-east – the whole church has a pretty symmetrical appearance.

The fine east window by Heaton, Butler & Bayne probably dates from the same date. The font is 15th century, octagonal with tracery motifs on shaft and bowl. There are some ongoing works being completed with new facilities such as toilet and kitchen (now completed reported July 2010). There is limited parking nearby and there is a pub in the village which I believe is popular for its food.

The church is locked and although it has a rather a plain interior with no grand monuments such as its neighbours at Church Langton and nearby Welham the full length clerestory into the chancel gives the church a refined symmetrical appearance and it is a very pretty church.
I would like to thank Leslie Hughes who has supplied much valued information on the write up for the church.