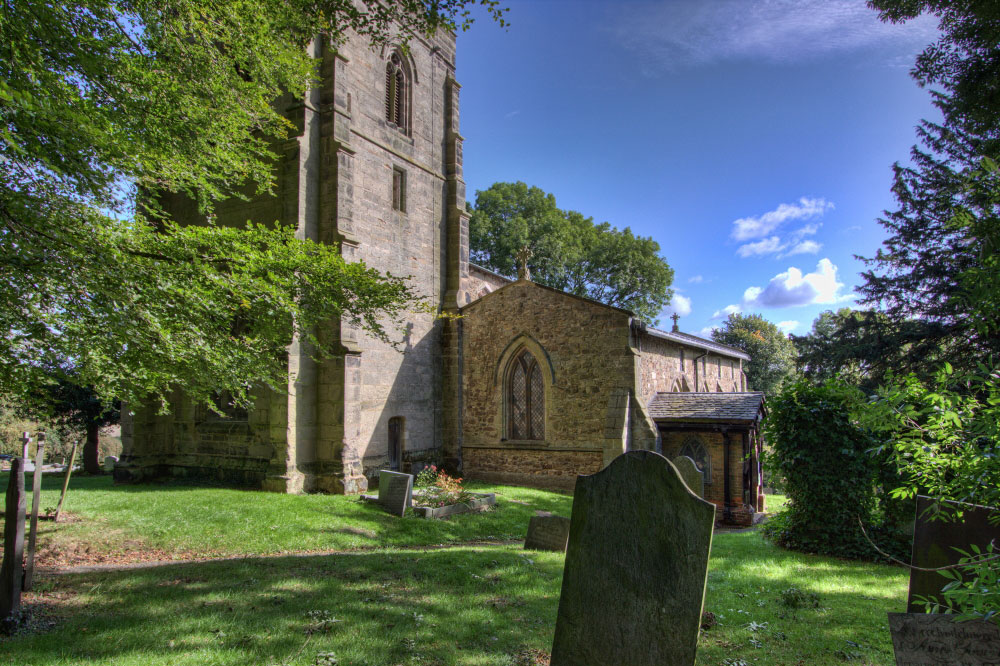 The church is surrounded by tress and hence hard to photograph, view from south-west

The church at Thornton is set on the side of a hill overlooking the reservoir, it is a very pretty location but before 1854 the reservoir did not exist. The village is 8 miles north-west of Leicester and its nearest neighbour is Bagworth with its interesting 1960’s built church. The village name means a settlement walled by strong hedges – thorn hedges, hence the name.

There was probably an earlier church on the site, but the earliest parts of the present church date from the 13th century, these are the aisles and nave. The tower is 15th century in the perpendicular style with recessed spire and two tiers of lucarnes (small dormer windows), the clerestory windows and heightened nave also dates from this time. At the west end of the north aisle is a cusped spherical window which probably dates from the 13th century, this was hidden for many years. 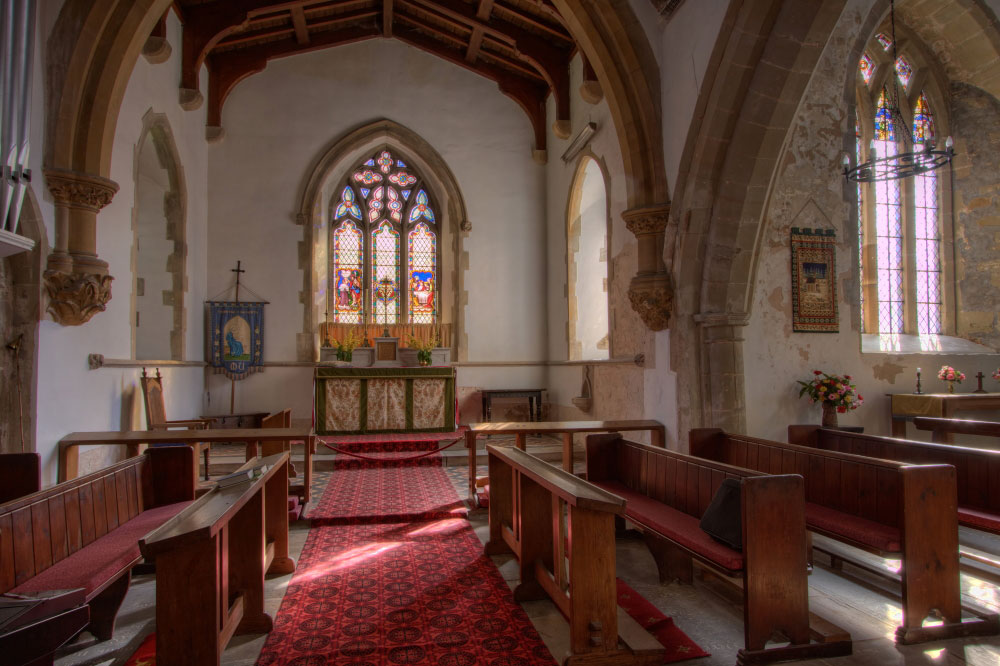 Chancel restored in 1864, and to right the south aisle

On entering through the porch you will be met by a 6ft by 9ft door dating from the 14th century, this is supposed to have come from Ulverscroft Priory. This was a monastic building in Charnwood Forest founded in the reign of Henry II of the Augustinian order and it survived until the dissolution. There is still the ‘sanctury ring’ attached to the door by the handle, anyone grabbing this would have been given sanctuary in the Priory. The font by the door is 15th century and of octagonal design. On the base is carved tracery and on the entablature are Tudor roses of Henry VII’s time. Above the chancel arch is a colourful 1820 tympanum which depicts the commandments and prayers. 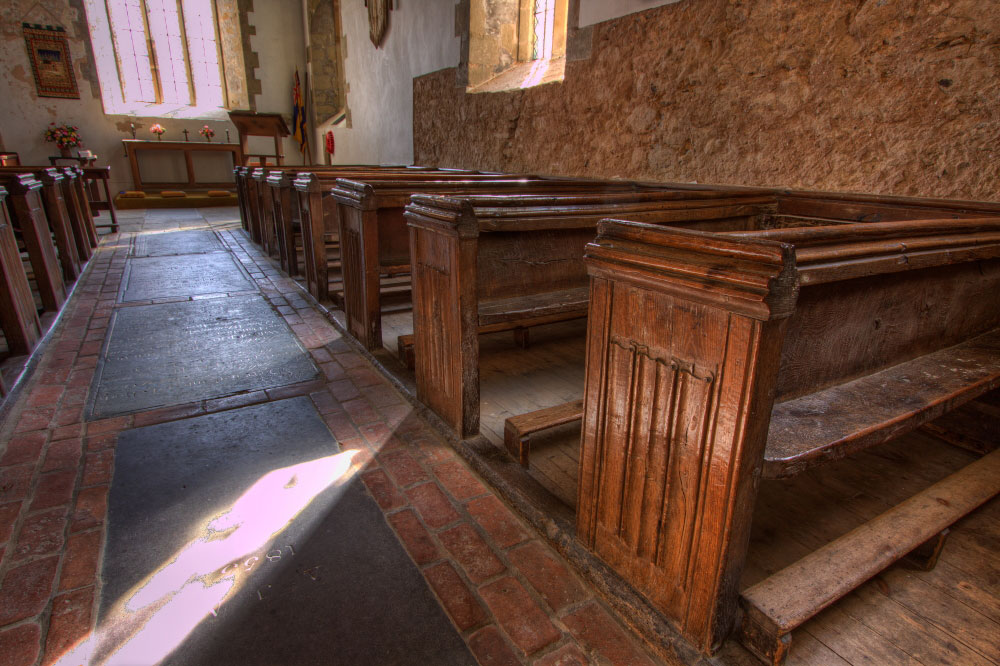 The pew seating dates from 1500-1560 and was made by one Robert Baken. Every bench end is carved with straight and linenfold carving which is quite exquisite. The Victorians did not restore (or my usual term ‘Victorianize’) the church apart from the chancel area. This has left us with the fine woodwork, plastered walls and original floors. The east window of the south aisle contains 14th century glass, in the chancel arch is the remains of the rood screen which was mostly removed in 1644. There are apertures for the rood loft on the arches either side.
The church of St Peter’s is special in that it has many interesting features, and due to the lack of a Victorian restoration these have survived. It is set in a beautiful location and is well worth a visit. To appreciate the church it is best to park in the reservoir car park and follow the lake to the left, you will then see a stile leading up the hill to the church, it is steep so be warned, and would not be feasible for wheelchair users. You can park in the village and walk down to the church if you feel it is too much. 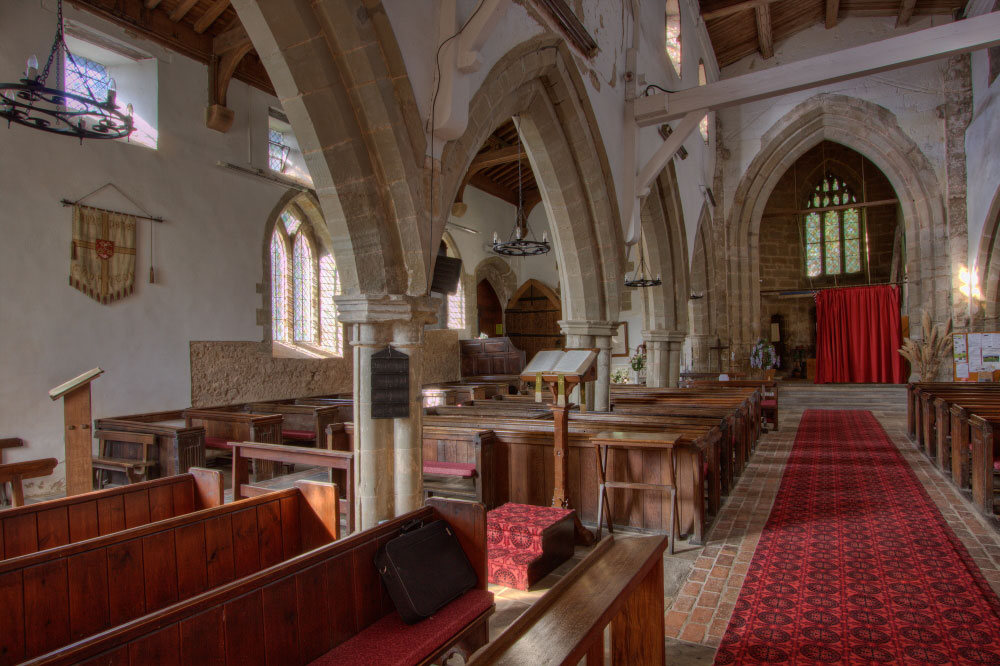 I would like to thank the churchwarden for his help in gaining access to the church and the interesting information. His help is especially appreciated. The church is locked but you can collect the key from a local shop – details on the church-door. (This is a very good idea, perhaps more churches could be open using this method?). There are facilities in the village and a cafe by the reservoir.

Peter Maguire
Pevsner mentions a Maze ‘in the floor of the nave’. Is he correct?

Pam Fisher
Hi Peter
Unfortunately it’s not there now, and it’s difficult to know exactly what it was. An article in the Leicester Advertiser in May 1975 when the church floor was repaved mentions ‘an arrangement of stones in a square surrounded by concentric circles’ that local people called ‘the maze’. This was believed by the 1975 archaeologists to be the base setting for a font, and they found a sump underneath where the water could be drained. Unfortunately it disappeared in 1975 when they put the new floor in.
Pam Fisher – Leicestershire Victoria County History Trust