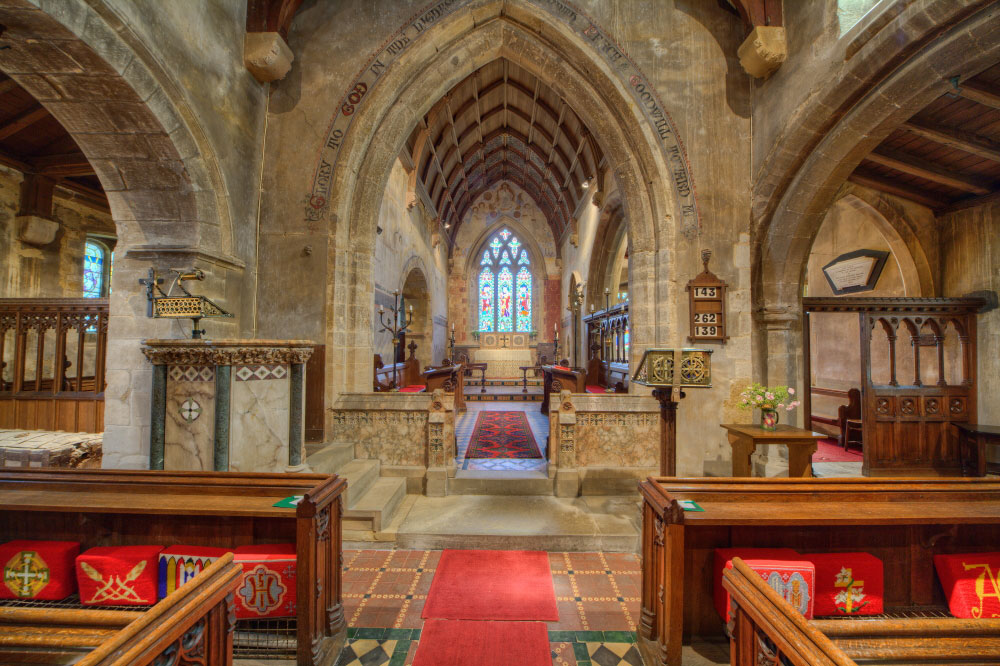 The chancel rebuilt in 1858 with the ornate alabaster pulpit

This small village lies on the main road between Lutterworth and Market Harborough on the border with Northamptonshire. It straddles hills looking over the Welland Valley. Recorded in the Domesday Book of 1086 it had 38 inhabitants, in the 16th century around 250 and in 2001 recorded at 230.

To the south of the village lies Hothorpe Hall now a wedding and conference centre. Originally there was a hamlet at Hothorpe but the tenants were moved around 1830 to Theddingworth when the Hall was expanded. There will be an entry of Hothorpe Hall Chapel at some stage. The first Hall built around c. 1600 possibly by a George Bathurst was later replaced by the present building early in the 19th century. Some monuments to the Bathurst family survive in the church.

In 1086 it was recorded that there were several families holding the manor but by the medieval period the most important holdings were with the Trussell family of Skipton and the Abbot of Leicester. You can find out more on the history of the manor and village here. Interestingly a connection with the ‘Spencer’ family began in 1744 when much of the property passed to them, by 1851 they owned 40% of the parish and the 7th Earl was still in possession of property in 1958. An interesting fact is that a cottage industry flourished by 1846 weaving silk-plush for the hat trade in this small village. 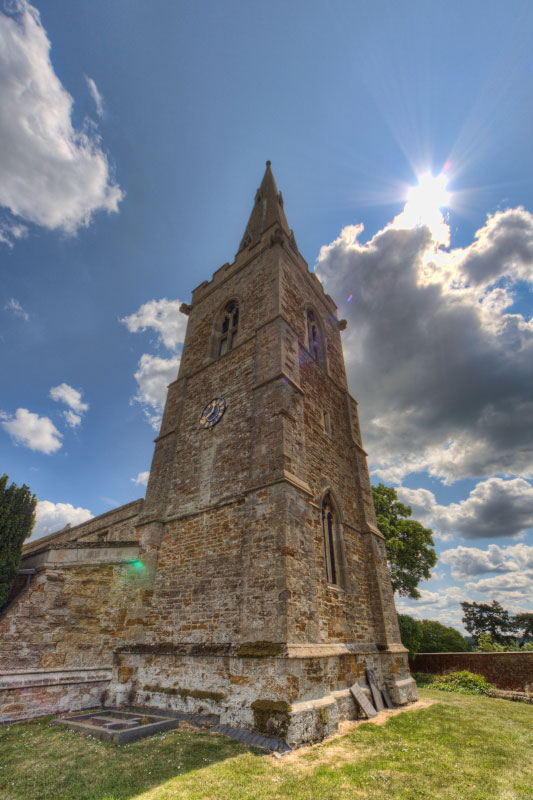 The tower and recessed spire at Theddingworth

A church is recorded before 1150 and there is mention of a chapel at Hothorpe although this is not mentioned after 1626. Most of the rectors were appointed by Leicester Abbey but after the Reformation most were non-resident. For example in 1576 Leonard Ward the incumbent lived in Oxford, but this as no means unusual during this period. 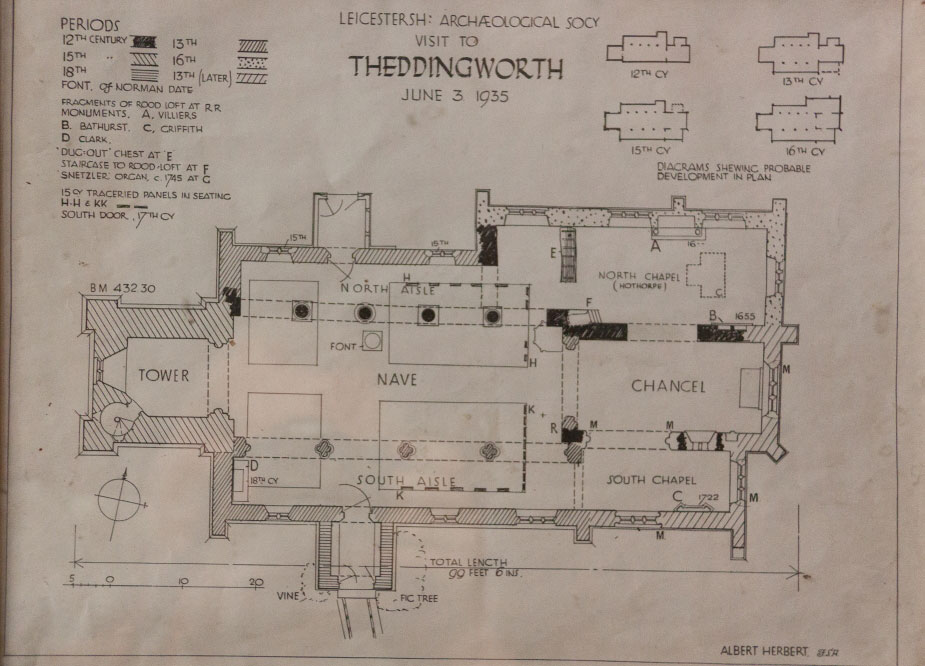 Plan of church and periods from 1935 on display in Church 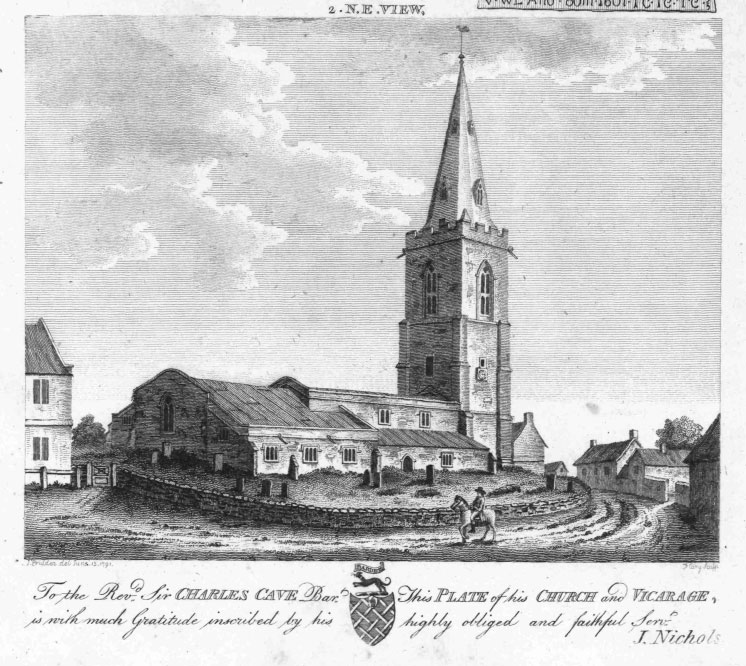 A view of the church engraved late 18th century for Nichols. Note the East end compared to recent photo

You can clearly see the difference in the late 18th century engraving and the photo taken in 2011 of the east end of the church. Oddly I seem to have ‘missing’ several shots of the exterior but I will return in the next few weeks when passing and get these again. 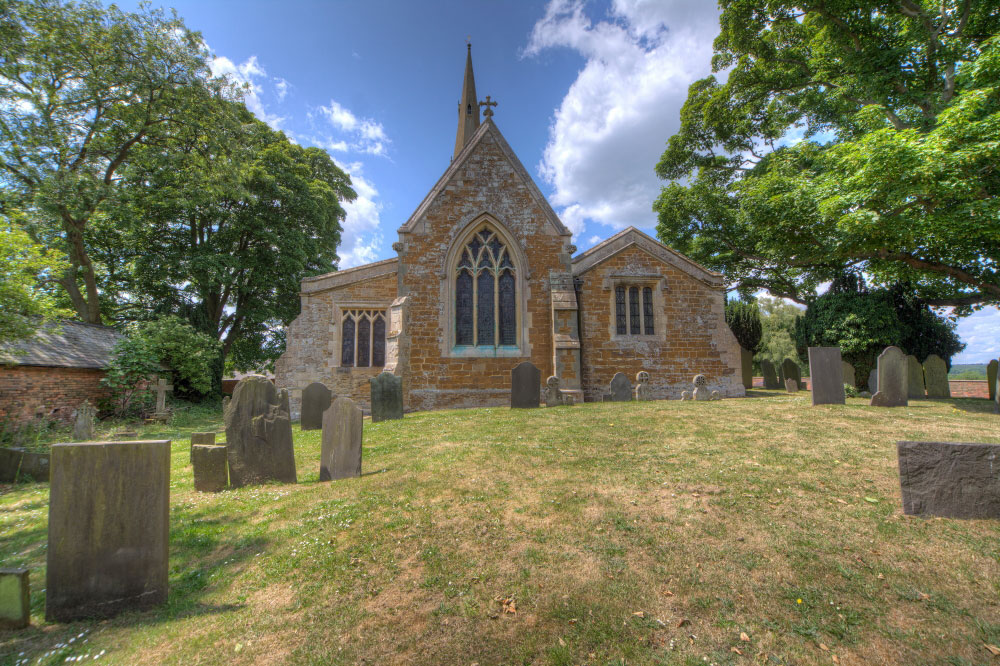 Recorded in Nichols was the fact that the inhabitants of the hamlet of Hothorpe were responsible for a third of the repairs required on the church until the inhabitants were moved by enclosure as mentioned in around 1830. He also records; “Sept. 22, 1645. Resolved, that the yearly rent of £50. be paid out of the impropriate tithes of Oadby, sequestered from Sir John Lamb, for increase of the maintenance of Mr. George Greene, vicar of Theddingworth; the said vicarage being worth £42. per annum in the best times, and now much impaired; and the said Mr. Greene having a wife and seven children, and good part of his estate plundered from him by the king’s forces.”

Earlier in 1645  Mr Greene the incumbent received monies from the rectory of Great Dalby which was sequestered from the Earl of Antrim, a Papist and rebel in Ireland. However in 1650 when Mr Greene was still rector, Theddingworth was returned as an impropriation; the value of the rectory £80; of the vicarage £20; and the incumbent as “insufficient, non-resident, and scandalous.” 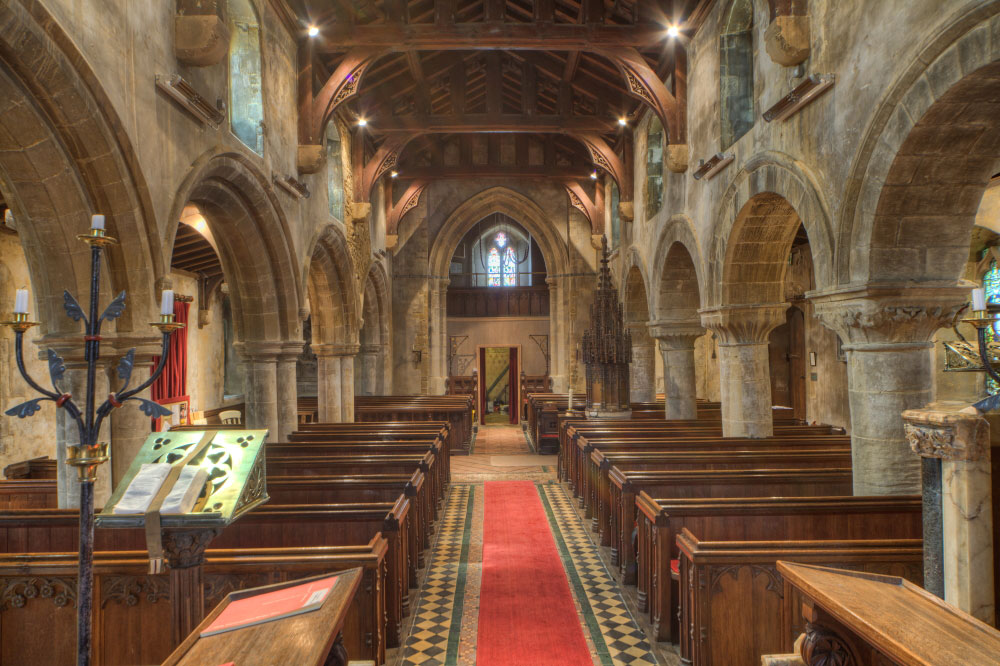 In 1858 the church underwent a restoration by Sir George Gilbert Scott. A porch was built on the north side (the current entrance) and the chancel had major alterations. The whole church was re-roofed and most of the fittings date from the restoration. Scott had new glass installed including the east window and added the sedilia, altar and reredos. The alabaster pulpit (supposedly from Venice) with coloured panels  has fine carving across the top. Around the chancel arch and East window are various paintings and writings which date from the Victorian restoration. 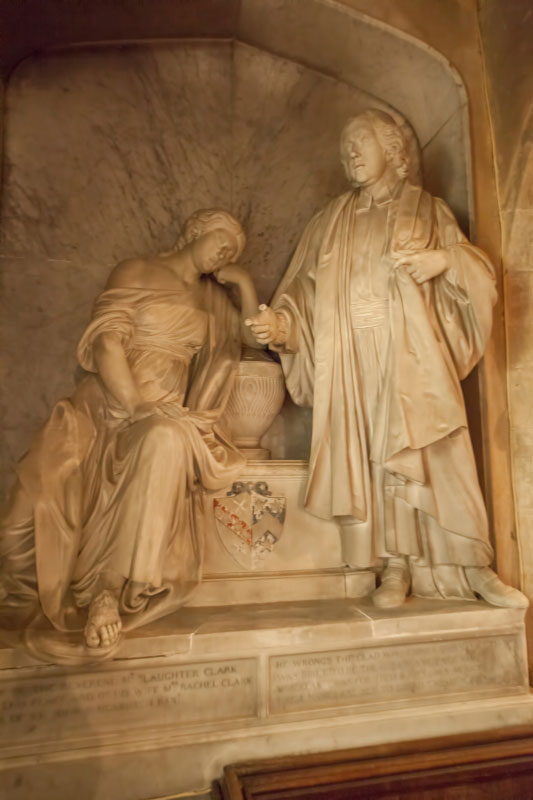 In the Leicester Chronicle of July 3rd 1858 they covered the re-opening and mention Minton’s encaustic tiles which can still be seen. These were designed by Rev. Lord Alwyne Compton. The cost of the restoration was reported at £2000, which is substantially higher than the £1400 reported in 1856 for the work, it seems even the Victorians had problems with ‘over-spend’. Earl Spencer donated £200, and John Cook of Hothorpe Hall donated £300. 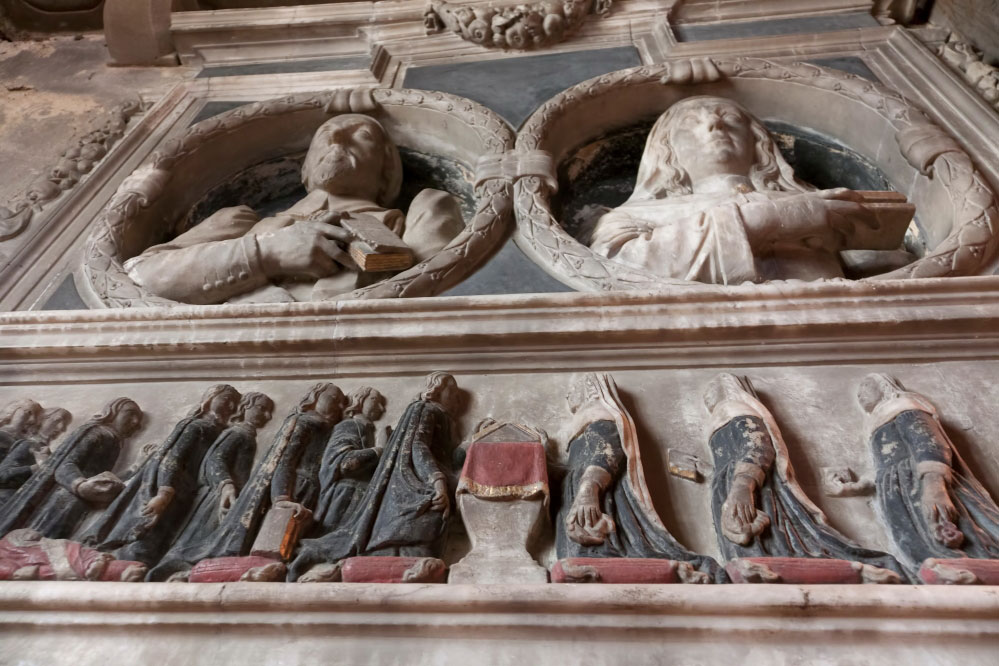 Monument to George Bathurst (d. 1656) and his wife from the Hothorpe Hall

The chapel in the north aisle is named after nearby ‘Hothorpe’ and these contain some interesting monuments. One monument is to George Bathurst (d. 1656) and his wife from the Hall. It has half length figures set in a oval recess with kneeling figures of their 13 sons and 4 daughters in a lower panel. The other monument is an alabaster tomb with Elizabethan figures lying on their sides with their heads resting on a hand. It is thought these could be to George Chambre of Petton, once an owner of Hothorpe Hall.

In the south aisle are two items of interest. In the Lady Chapel is a monument to Griffith Davies MD and Elizabeth Burgoyne. He died in 1722 and the tomb is in latin with a translation shown here. At the west end of the south aisle is a fine monument to the Revd. Slaughter Clarke with a life size figure of him in a cassock standing next to his wife who leans on a urn whilst looking slightly bored.

I do like Theddingworth Church, it has some fine monuments and interesting features and is worth a visit. However the church is usually locked and there no facilities left in the village. In 1846 it was recorded there were three pubs and The Crown Inn was still there in the 1960’s but has now closed.