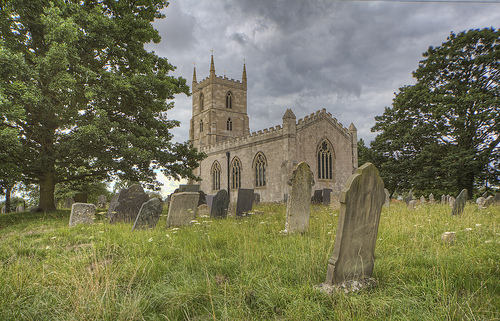 This is a very special church with a unique feature that I shall come onto later. The village of Teigh in Rutland is a small community some…..from Oakham.
The village is mentioned in the Domesday Book as ‘Tie’ and the first reference to a church at Tie was around 1100. Teigh has had a notorious Rector. In 1321 Teigh had a Richard de Folville as Rector, a ruffian priest who often joined his lawless and at that time out-lawed relations the Folvilles of Ashby Folville in Leicestershire and Newbold Folville in Hungtingdon, in exploits of robbery and even murder. He ended his career in 1341, defending himself in Teigh church against the under-sheriff and his men, who overpowered him, dragged him out and cut off his head in the village street.
In 1478 the Sherards first appear as rectors and patrons of the church. In 1604 a Zacharias Jenkinson became rector. A Puritan who was frequently in trouble for refusing to bow at the name of Jesus and not standing when reading from the gospels. 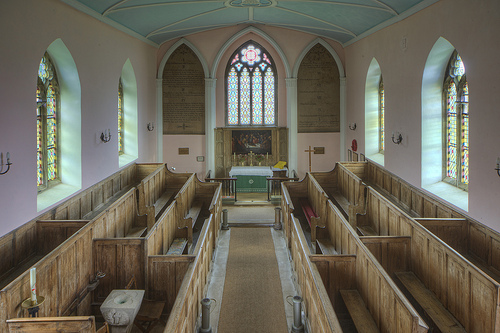 The church was rebuilt for the fourth Earl of Harborough by the architect George Richardson in 1782. The Earl during this period also built Stapleford church and also the church at Saxby. In 1783 the Stapleford designs by George Richardson were exhibited at the Royal Academy and the church at Saxby was built in 1788.
There was an earlier church but only the base of the tower survives from the 13th century with some later 14th work above. There are some obelisk pinnacles and a 18th century medieval frieze along the battlements. You enter the church via the west tower entrance into a circular lobby and then into the nave with its three bays and chancel built all in one. 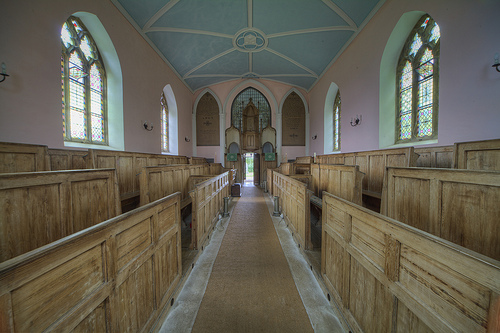 The pews and seating are facing each other on three tiered rows as at Stapleford. The tall windows are original but the tracery was added in 1893 as was the stained glass. Originally the windows were of plain glass and without mullions.
The plastered slightly coved roof shows a triangle at each end (representing the Trinity), the Royal Arms at the centre and the Sherard Arms to the west with a variation of the Sherard Crest to the east. There is also a fine wooden font in the shape of an urn which was installed when the church was built, this was originally attached to the altar rails but later moved.
Over the altar is a Flemish painting of the Last Supper dated about 1600, possible the work of pupils of Otto van Veen (or Venius). Also on the east wall hangs a list of rectors from 1238. 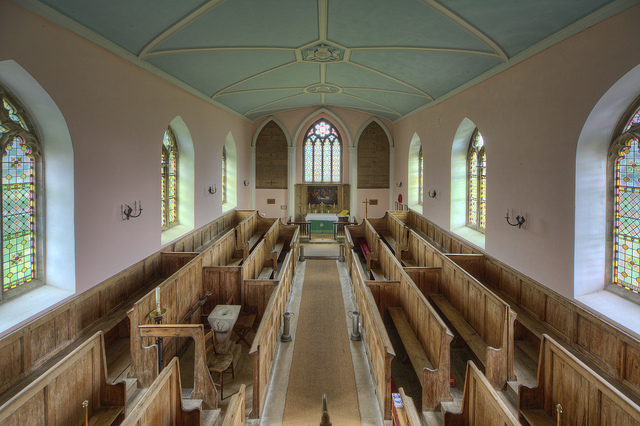 Teigh Church Nave from the pulpit

Now we come onto its unique feature the fantastic triple pulpit built into the west wall, the ‘Strawberry Hill Gothic’ pulpit, prayer desk and Lectern are all built over and around the entrance to the nave. The rector and readers would have been in the different position and heights during the service. You would only see their heads and tops of their bodies a most unusual feature. We see why the pews are facing each other so they could see up to the rector at the pulpit and then turn to view the altar. 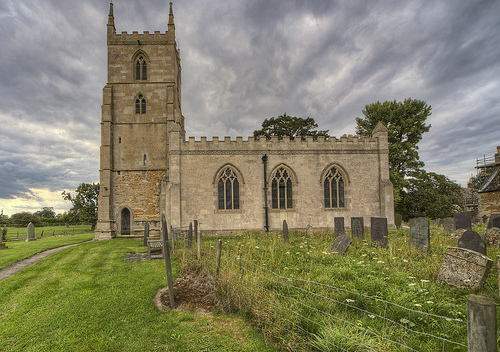 Teigh is a fine building, the interior is not as grand as the Stapleford church or as clean and impressive as the church at Kings Norton which is in a similar design, it is however still very special and with that unusual pulpit should be on your place to visit. The church at the moment is usually locked (unusual for Rutland) but there is a list of three key holders on the door so hopefully one of them will be available. There are no facilities in the village but there is ample parking by the church.