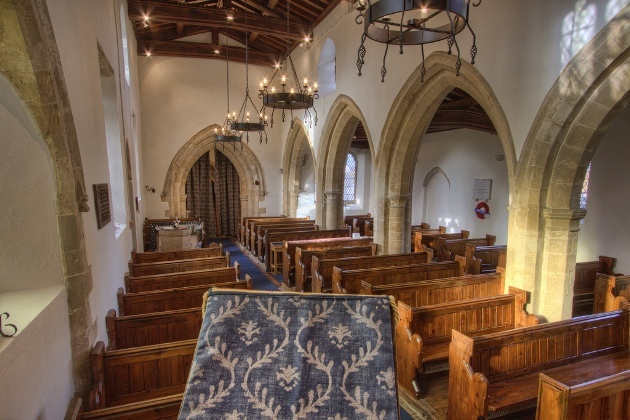 View across nave to tower arch

Slawston lies eighteen miles south-east of Leicester, on the southern edge of the hills overlooking the valley of the Welland and adjoining the county boundary with Northamptonshire. The parish includes the deserted hamlet of Othorpe, formerly a chapelry of Slawston and has a total area of 1,501 acres.
The parish occupies a promontory of higher ground jutting south-eastwards towards the Welland and bounded on the north-east and south-west by two small tributaries. The village lies at over 300 feet and Slawston Hill (sometimes known as Mill, Barrow or Burrough Hill) exceeds 400 feet. According to the 2001 census the parish had a population of 143. 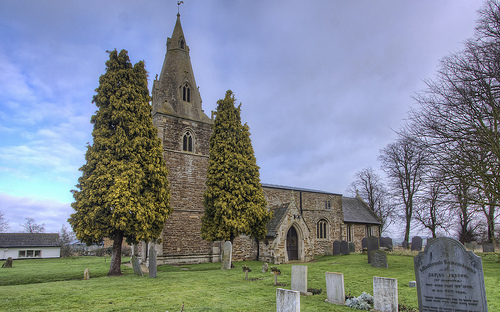 In the early 16th cnetury the Brudenell family aquired the manors at Slawston and Slawston became the centre of their estates in this part of Leicestershire. The now deserted village of Othorpe was probably deserted by the 15th century, a communal bakehouse was still being used in 1368. The chapel at Othorpe is not mentioned again after 1220, and presumably fell into disuse when the hamlet was depopulated. A close near Othorpe House retained the name of Chapel Close in the 18th century, and it was said that foundations had been discovered there. 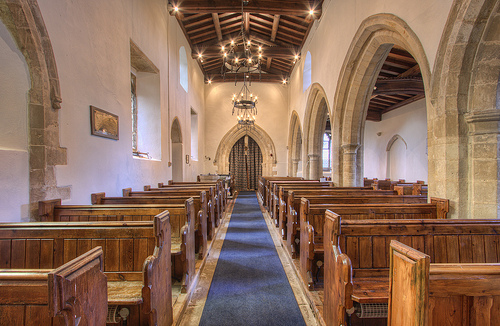 The west tower arch and nave.

The church of All Saints is set at the east end of the village and consists of a broached west tower, north aisle, nave, chancel, vestry and south porch. The church dates from the late 13th century and is built of ironstone and limestone. The tower with its short broached spire has two tiers of lucarnes and a string course and is composed of limestone ashlar and dates probably from the 14th century. The existing nave arcade is of four bays, and dates, with the exception of the east bay, from the 15th century. The east bay has moulded responds similar in style to those of the tower arch and has a hoodmould with bar stops. The piers of the remaining bays have deep chamfered projections without capitals to the nave and aisle, and semi-circular shafts and capitals to the arcade. Also to the 15th century belong the north aisle windows, and the window inserted into the blocked opening in the south wall of the nave. Roof corbels in the aisle have been reset, probably when the arcade was constructed. The aisle walls possibly date from c. 1400, to which date the blocked north doorway may be ascribed, but the aisle roof is of modern origin. The north aisle was traditionally appropriated to the inhabitants of Othorpe. 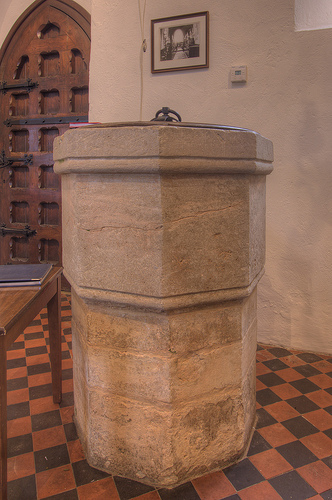 The octagonal font which is of limestone is probably of the 14th century. It has a roll-moulded string at the base and another towards the top of its bowl.In 1864 H Goddard & Son of Leicester completed a thorough restoration. The chancel and porch were rebuilt and all the old windows replaced. The vestry was added at the same time. 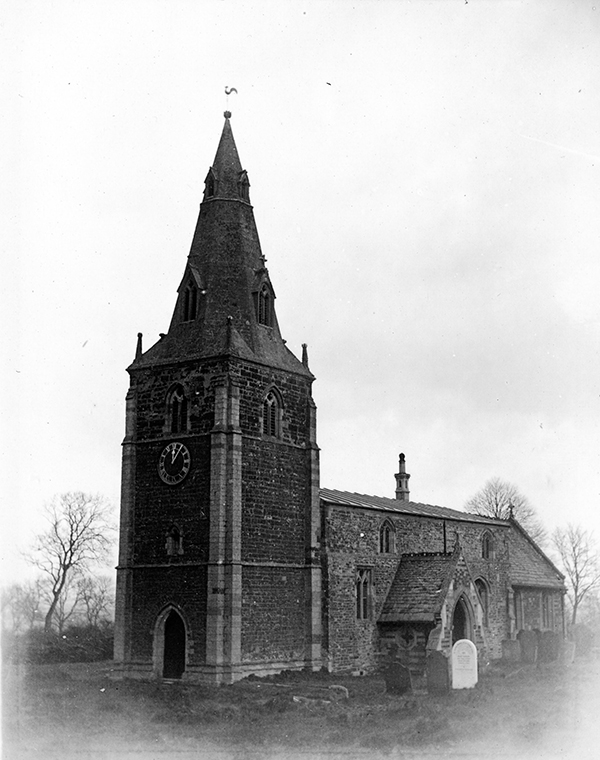 Slawston Church from postcard 1905 (thanks to Nick for allowing publication)

All Saints is a pretty little church and was the the first visit in 2010. Although it was rather a dismal day we did have some sun which helped. There are no pubs in Slawston itself, probably the nearest facilities are in Hallaton neaby. The church is usually locked unfortunately but if you are passing it is still worth visiting to admire its fine spire.  Local walk available leaflet PDF here.

The church at Slawston is usually LOCKED. More information here.