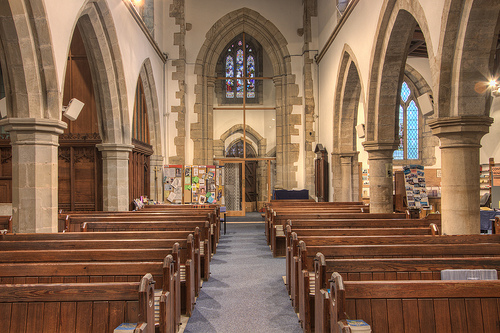 Rothley is 5 miles north of Leicester and has a population of 3,612 according to the last census in 2001. We know that the area has been inhabited since Saxon times due to the Saxon shaft. This is a twelve feet high millstone grit cross carved with typical Saxon strapwork that is situated south of the chancel in the churchyard and dates from the 9th century. This object is worth a trip to the church for itself but the church also has some more interesting features. 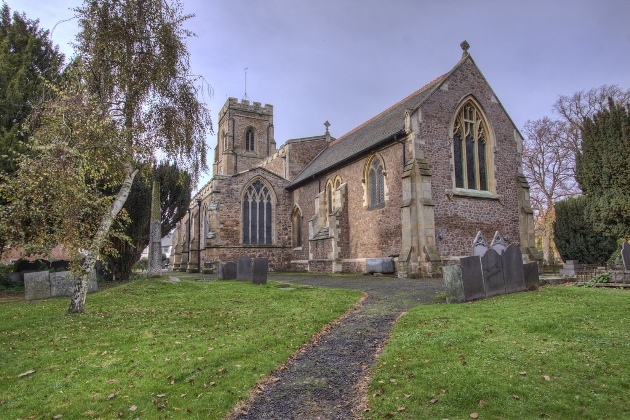 The village is mentioned in the Domesday Book as ‘Rodolei’ and included 37 acres of meadow, mill and woodland. In the Middle Ages, Rothley was home to a manor of the Knights Templar, known as Rothley temple, but now the Rothley Court Hotel, which passed to the Babington family after the dissolution of the monasteries in the 16th century. The Babington family held the manor for almost 300 years until the death in 1837 of Thomas Babington. I have contacted the Rothley Court Hotel and will be visiting to add the chapel to the Journal.

Incised slab of Robert Vincent (d. 1520) with his two wives Margery and Thomasina.

The church consists of a nave, west tower, chancel, north & south aisles, vestry and organ chamber. Probably the oldest part of the church is the 12th century nave, the aisles were added in the 13th century although not at the same time. The tower dates from the 15th century (remains of Norman stonework at base) as does the clerestory which was added to the nave. The chancel was restored in 1877, and the north porch, vestry and organ chamber were added at the same time. The Architect R Reynolds Rowe and the then vicar Richard Burton led the efforts to save the church from decay and the total cost of the repairs and addition was £3,008. 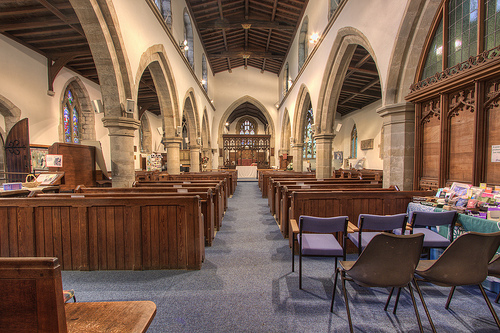 There are some further monuments of architectural items of interest within the church. There are two Hagioscopes in the north & south aisles which allowed the congregation to glimpse the lifting of the Host in pre-reformation services, and allow Assistants to coordinate with the Celebrant.
The fine large carved ‘Norman-Tub’ font sits on four more modern shafts in the south aisle. The rood screen at the entrance to the chancel is 15th century and of oak there is some good carvings on the piece including a Pelican feeding her brood. 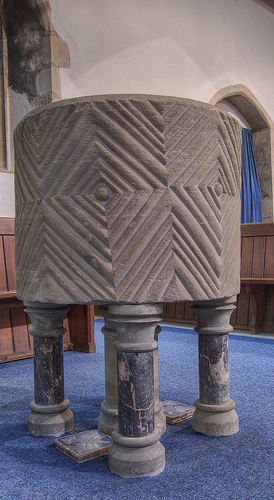 In the chancel we have a number of monuments, in the recessed south wall is the box tomb of Humphrey Babington (d. 1544) and his wife Eleanor (of the family Beaumont, descended from Richard III). More impressive on the north side we have the incised slab top of the boxed tomb of Robert Vincent (d. 1520) which features both his wives Margery and Thomasina. There are also many more monuments and memorials around the church, but there is a good guide which most of the information came from for this text.
The large church of Rothley although restored by the Victorians has managed to keep many of its features and it is a pleasant place to visit. The church is not usually open outside normal services times, but if you are in the area the impressive Saxon Cross is worth a visit to admire. There are plenty of facilities in the large village although parking by the church can be limited there are plenty of places to park nearby.