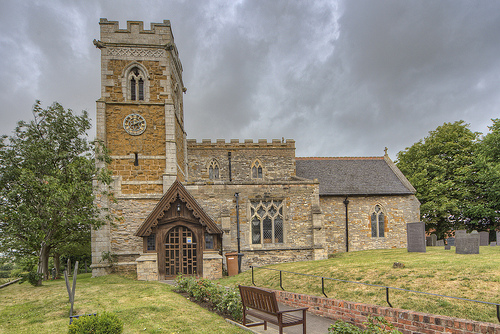 Some ten miles north-west of Leicester is the small village of Rotherby sited in the Wreake Valley. Having a ‘by’ in the village name like so many others in the area such as Frisby, Brooksby, and Hoby etc probably means that the area was most likely settled by the Danes. The village was mentioned in the Domesday Book as Redebi, which is from the Danish for ‘cross’. Perhaps an earlier structure stood on the site when the Danes arrived and colonized the area as the present stone church is far later.
After the Norman Conquest the manor of Rotherby was give to the ‘de Brett’ family. In 1394 they granted a large part of the manor to the Priors of Chaucombe in Northamptonshire. Later it was linked with Launde Abbey in the east of the county. During the Reformation when the church lost its lands it reverted back to the ‘de Brett’ family but they tenanted the Manor House to Sir Alexander Cave early in the 17th century. In 1654 they sold the estate to Sir Thomas Hartopp. 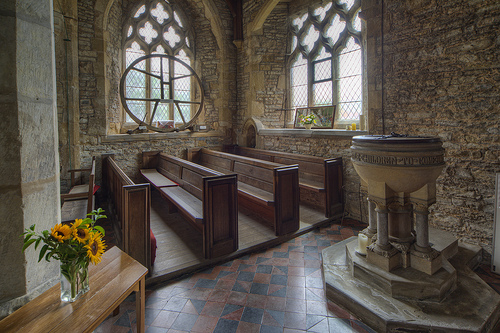 During the Civil War a family from nearby Hoby actually lived in the churchyard and then in the belfry at Rotherby. You can read more on this by visiting the Hoby entry which has recently been updated.
The present church dates to the 13th century and has an offset west tower, south aisle and porch with clerestory nave and chancel. Most of the information for this entry comes from the excellent work on the parish website (link below). 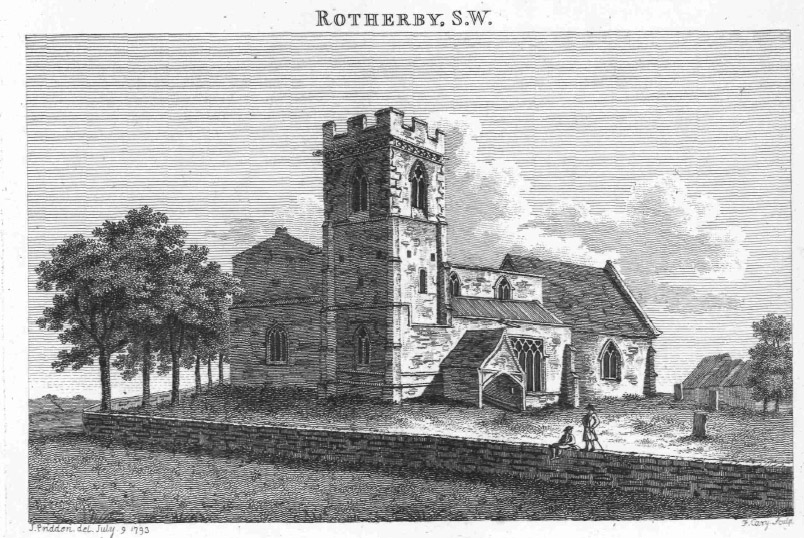 The actual date of the building is probably around 1220. This first stone building would have resembled the present day one, but consisting of only a chancel and a nave.
The fourteenth century was time of re-building and enlarging of the church. A west window was blocked off and replaced in a higher position, the roof also seems to have been raised during this re-building period and another interesting feature of this time is the arch which leads from the nave into the Chancel. On the north wall by the arch there seems to be a scar in the wall and on the altar side there is a mass of spare masonry. This would suggest that the archway was possibly moved in an easterly direction. 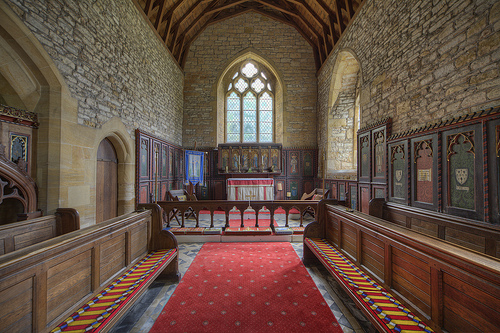 The 'Victorianization' of the chancel has removed much of the original features.

The majority of the present church building seems to date back to this fourteenth century re-building period but the building material is certainly considerably older and likely to have been re-used. At the same time the south-west tower was added. Due to lack of space to the west of the church it was built within the south aisle, a peculiar arrangement but not unique to the county.
In 1600 a stone was placed in the church testifying to the virtues of Robert Brett. It says “Hic facet Robertas Brett, miles” (“Here lies Robert Brett, Knight”). The Brett family disappeared from the records around 1659.
Nichol’s survey of the County carried out around the 1790’s mentions an ancient font, two fragments of painted glass and many floor monuments, but these and especially the stone testifying to Robert Brett have somehow disappeared. It is believed they were lost in the restoration of 1882. In John Thorsby’s book ‘Leicestershire View’ he states ‘The church has a very capacious old font almoft in the form of a tub’. 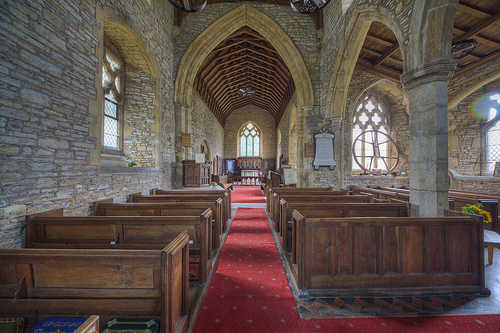 The church at the end of the 19th century was described as having fallen into ‘grave decay’ and plans for restoration were prepared by W. Millican Esq., Architect of Leicester. The work included a new vestry, porch and six new windows. The plaster was removed from the walls and a new pulpit and Communion rails were made from the oak timber of the old roof. A new roof was erected, the walls of the church were repaired and the old church gate was replaced. Pews were installed throughout the church in oak, and finally an organ was installed. In 1882 the ancient font was replaced with one which had four supporting columns of Purbeck stone. 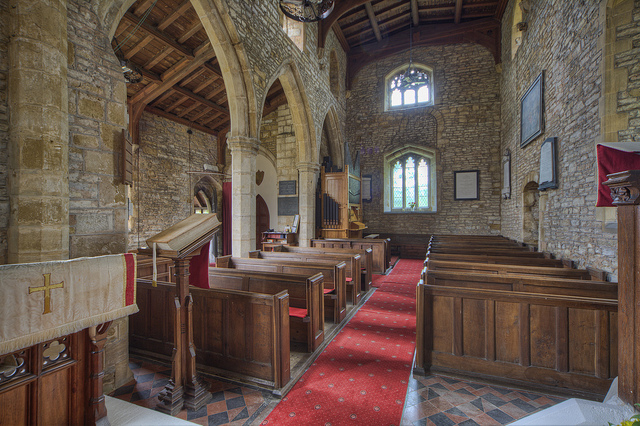 The font bears the inscription, “Suffer little children to come unto me”. The rebuilding of the church was definitely necessary, but it was carried out with little thought and many items of historical value were lost. As earlier mentioned, such items as the font, floor monuments, and fragments of painted glass disappeared. It is believed that when the floor was tiled in 1882, many stones marking internal tombs were covered.

In the year 1898 the church clock was installed and is still in perfect working order today.
There is some limited parking by the church but unfortunately the church is usually locked. If you do happen to find it open it is worth a visit and you can easily walk to the church from nearby Brooskby.