Ratcliffe on the Wreake St Botolphs 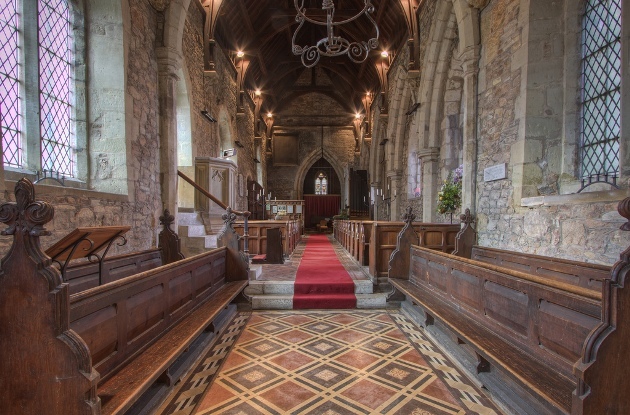 Nearly seven miles north-east of Leicester is the small village of Ratcliffe on the Wreake which takes the second part of its name from the River Wreake that lies to the south. It has a small population of a few hundred and is just off the Fosse Way. 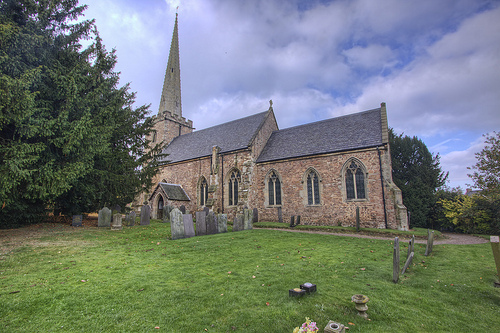 View from the south showing the elegant tall slender spire.

The pretty church of St Botolph’s consists of a nave, chancel and tower with a tall crocketed spire. There was originally a north aisle but this was removed between 1791 and 1795, internally the arches of the north aisle can clearly be seen. The chancel dates from the early 14th century and is unusually lower than the nave floor with a few steps down. There are sedelia and a double-chamfered recess in the chancel area in the style of the early 13th century and the font by the door is from the same date. All the furnishings are from 1869 and by R.J & J. Goodacre. The tall elegant crocketed spire has two tiers of lucarnes and in my opinion is one of the highlights of the building. 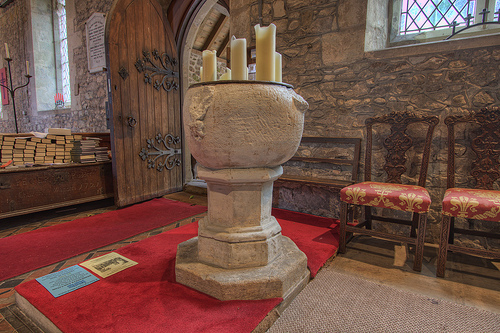 The 13th century font and south entrance behind it.

The village also has Ratcliffe Hall and in 1930 Sir William Lindsey Everard the owner at the time built Ratcliffe Aerodrome on his own estates. It opened with a ‘Grand Air Pageant’ on September 6, 1930. Famed aviator Amy Johnson made an unexpected trip from London to participate with Sir Sefton Brancker, Director of Civil Aviation. Some 5000 spectators were treated to a show with 100 planes and staged bombings of Chinese pirates. There was one crash, but no one was killed. Ratcliffe Aerodrome was one of the finest in civil aviation with a comfortable clubhouse and an outdoor pool. The hangars were first class and the many air shows and displays had the atmosphere of a garden party. It closed in 1950 and was situated just north of Ratcliffe College on the other side of the Fosse Way. There is a link here to further information on the aerodrome and its fascinating history. 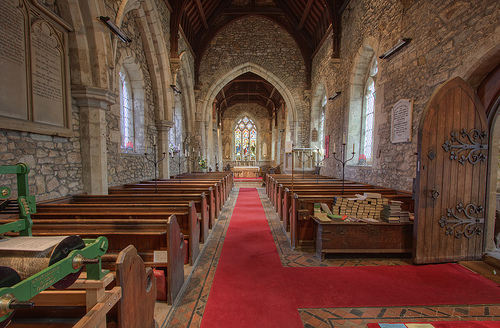 View down the nave towards the chancel and east window.

I must also mention Ratcliffe College itself an independent Catholic boarding and day school in Leicestershire. The College, situated in 100 acres of parkland on the Fosse Way was founded on the instructions of Blessed Father Antonio Rosmini-Serbati in 1845 as a seminary. In 1847, the buildings were converted for use as a boarding school for upper-class boys. The College became coeducational under the Presidency of Father Tony Baxter in the mid 1970s. As of the 2009-2010 academic years, there were 675 students on roll at Ratcliffe, from ages 3-18. The school buildings were designed by the Victorian Gothic revivalist Augustus Welby Pugin. Pugin, who is associated with Catholic architecture throughout the Midlands and north of England, is also noted for his collaboration with Charles Barry in the reconstruction of the Palace of Westminster. The Square was designed by Joseph Hansom, the designer of the Hansom cab. various building works over the years have contributed to Pugin and Hansom’s work, and modern buildings include a “new” gothic refectory (constructed in the early years of the twentieth century) and a Byzantine-style church.

I could not find much about St Botolph’s apart from the limited text in Pevsners guide which is included here. It is a very pretty little church in a pleasant village. It is usually locked but there is parking outside. Access for wheelchair users will be difficult due to steps and road.