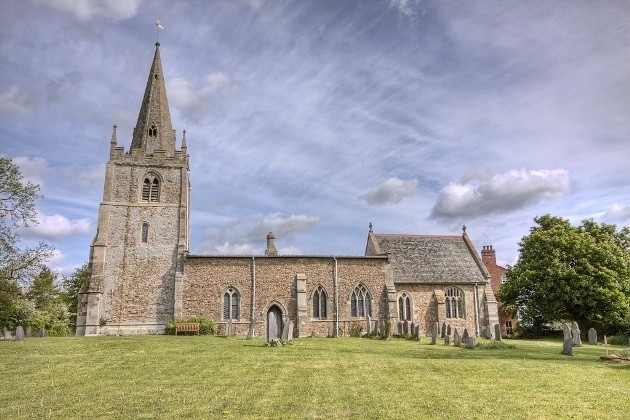 The village of Peatling Magna lies some 8 miles south of Leicester in the district of Harborough, it is a rural village surrounded by farmland and is close to the villages of Willoughby Waterleys and Arnesby. After the Norman Conquest in 1066 the church and manor came under the control of the Normandy Abbey at Saint-Evroult. Eventually it passed to the English Crown probably in 1414 and then passed to an English abbey at Shene in Surrey before a rich local yeoman named William Jervis bought the manor in 1564. He died in 1597 and there is a fine monument in the chancel . His heirs continued to have the right to appoint the vicar until 1729 when the parishes of Peatling and Willoughby shared a priest. Since 1952 these two villages were further amalgamated with Ashby Magna where the priest for all three parishes has the vicarage. 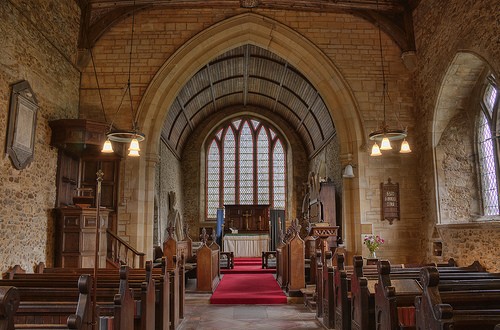 The nave and chancel with the fine roof

The church of All Saints in Peatling Parva at first glance is an odd looking church with its chancel roof standing far higher than the nave’s shallow roof. The original roof was altered in the 14th or 15th century, the angle and line of the original can be seen on the east side of the tower. The windows on the south side also look low down; both could be related to the new nave roof and a heightening of the nave walls. The church dates from the 13th century and consists of a west tower with spire, nave and chancel. The font although altered dates from the 13th century and in the north chancel wall there is a fine trefoiled arch which rests on two small pillars which again is 13th century. 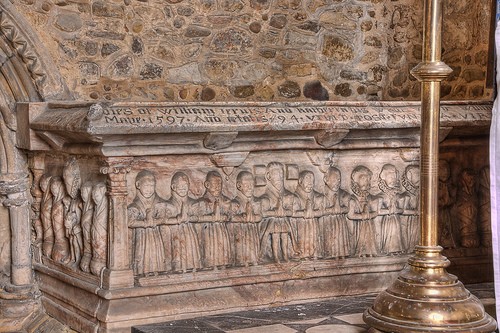 The Jervis tombs and monuments in the chancel are very interesting. The one by the alter on the north side dated 1597 is for William Jervis who died aged 94!
He and his wife Katherine had many children shown around the tomb sides, some are swaddled showing they died in infancy whilst the others and there were many of them survived. The other tomb is for his son another William dated 1614, this sits in front of the fine trefoiled arch. The last monument on the south side is for another William Jervis and his wife Elizabeth which is sculptured in alabaster. This is a fine monument and with marble and some nice decoration. There were many repairs and works completed in 1780 as well as the early 19thC, and in 1905-6 the church underwent much restoration to the chancel roof and other areas of the church. 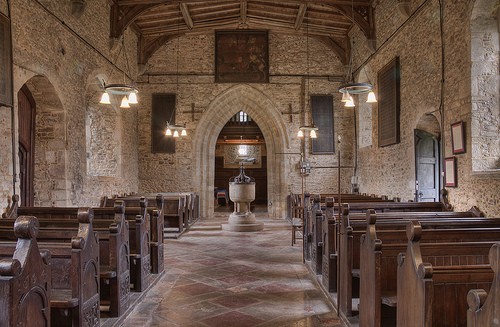 There are some wooden screens etc in the base of the bell tower plus some old photographs. The church is very light and attractive with its open nave and great east window. The monuments are of course interesting but it has many other items from its very old pews to the covered pulpit. You could spend much time in this peaceful place admiring the handiwork that went into this fine building.

Access is via two paths from the main road, there are no steps but a couple of gates, there is a pub the Cock Inn in the village which does excellent food but you may have to book at busy periods. There are fine views of the church from the road to Bruntingthorpe where a few of mine were taken.
The church is still used for services but it is not usually open although there are details of churchwardens at the church.
The historical info comes from the churches excellent guidebook by John Day – this is a fine read for a fine church.