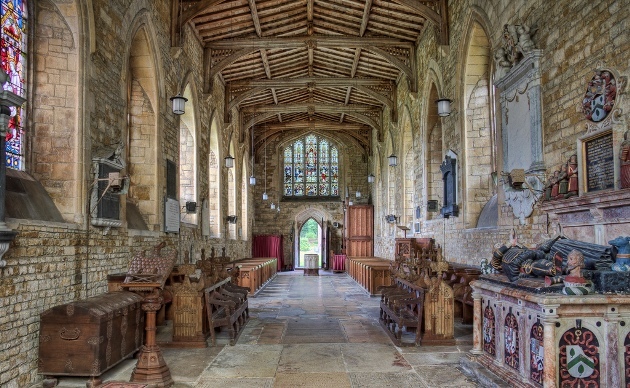 Noseley Chapel is part of the estate of Noseley Hall and a private family chapel of the Hazlerigg family who have lived here for over six hundred years. The actual village of Noseley was reduced in the 16th century by the enclosures which was to the west of the Hall and estate. There was a parish church for the village but this fell into disuse and became ruinous by 1518. The chapel became the parish church for Noseley and services would have been held here. 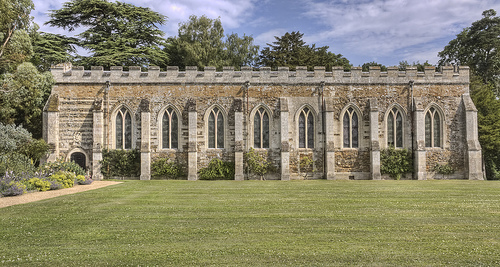 In 1270 the Chapel was founded by Anketin de Martival whose coat of arms are over the original south door as a college for chaplains. In the 15th century there were changes to the building including new roof, battlements and the fine east and west windows. There was a tower on the north wall but this was taken down after 1790 although the doorway to the tower can still be seen although filled in. The bells were reused at St Andrews church in Northampton. The nine bays of the chapel house consist of a nave and chancel all of one building. The east window contains early 14th century glass and and in the chancel there is a 13th century double piscina and sedilia. 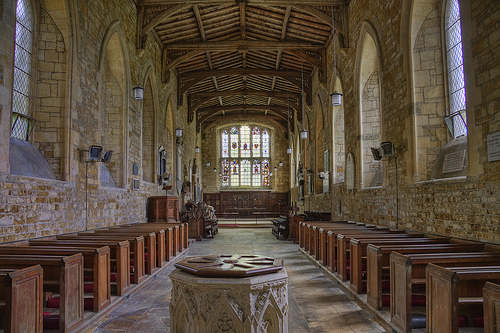 The chapel underwent some restoration between 1890 and 1900 and one of the sedilia which was bricked up was found to contain a skeleton, but there are no records of who and how it got there. The wooden pannelling below the east window was installed in 1929 by Sir Arthur, 13th Baronet as was the Communion table sourced from a timber yard in Lutterworth, which is said to have come out of Wycliffe’s Church.The pews which date from the late 15th century have very ornate carved heads with cockerels, angel motifs, and other carvings. It is not known where they had come from or why the use of cockerels, but in 1473 a William Hesilrig (the name changed later to Hazlerigg in 1818 by Sir Arthur Grey, 11th Baronet) married Elizabeth Staunton of Staunton Harold whose family crest is a Cock; so there may be a connection there. 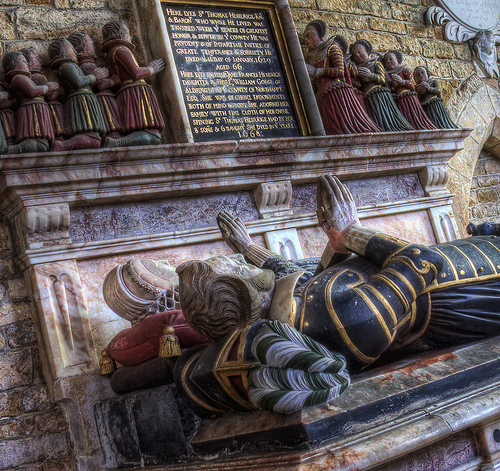 The chapel has many monuments and slabs to family members, although some of the floor slabs are badly worn. Near the east end window against the north wall are two large monuments to Sir Thomas Hesilrig with his wife Dame Frances and their fourteen children standing above, and the second to Sir Arthur 2nd Baronet and his two wives who died in 1660. Sir Thomas died in 1629 aged 66 but his wife outlived him by 39 years passing away in 1668. They both entertained King James I at their Alderton estate, of which Dame Francis was heiress, and Sir Thomas was knighted there. In 1622 he was created a Baronet. 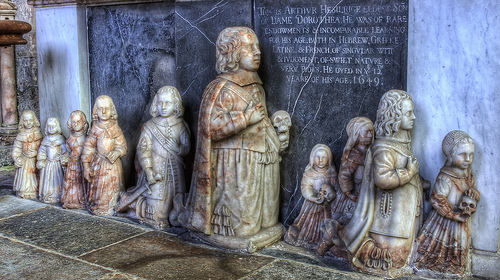 The fine carved children on one of the Hazlerigg Monuments

Sir Arthur was a supporter and friend of Cromwell and a General in the Parliamentary Army where he raised a regiment of cuirassiers known as ‘The Lobsters’ on account of their heavy armour. He died in the Tower of London on the orders of King Charles I but was not beheaded as others due to the fact he refused to sign the death warrant of King Charles. The monument has both his wives with the second wife on her side looking towards her husband. There are some very interesting figures on the floor in front of the monument that represent their children. Some are carrying skulls that signify they had died before the tomb was made, some died in infancy. One little boy has an inscription, he ‘was of rare endowments, a sweet nature and very pious’, and he died at the age of twelve. 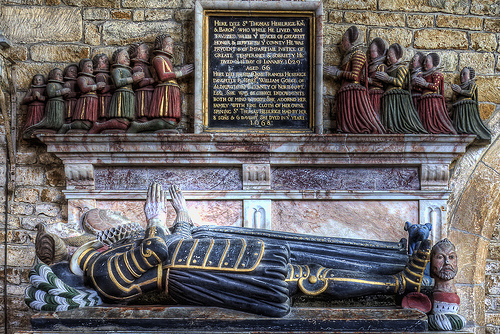 There are many other wall monuments to the family around the chapel each with their story to tell, but I do not have the room here to describe them all however Sir Arthur Grey, 13th Baronet was created a Peer in 1945 and a memorial to him on the south wall shows the Arms of the new title and a briefly tells of his public works. From 1406 to 1998 many members of the family were interred in the chapel vault which is entered through a covered access, however an adjoining lawn has been consecrated and family members can now be laid to rest there. The oldest incised floor slab is to a Margaret Heron who died in 1406 and was Heiress of Noseley, her only daughter, Isabel, inherited the property and married Thomas Hezelrigge of Fawdon, Northumberland. It is since this marriage that the Hezelrigge family possessed Noseley. 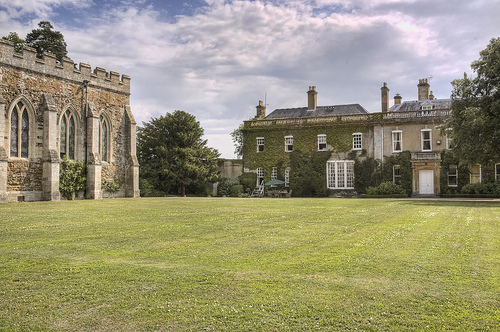 Noseley Chapel is a special place, not only is it a beautiful building and been a place of worship for nearly a thousand a years, it is also a rare example of a family chapel that has survived for over 600 years. The Estate do organise private weddings at the chapel and Hall and I can imagine that they make a very special day even more special with the gardens and woodland around the chapel.
The present Lord Hazlerigg has recently put the entire estate up for sale which is unfortunate, the burden and upkeep of the estate has become too much, I just hope that the future new owners take as much care of the building and surroundings as the Hazlerigg family have clearly done.
The chapel at present is not open to the public but I would like to thank Lord Hazlerigg for the opportunity to photograph the chapel for this Journal and so allow people to see this fine building.

[nggallery id=31]
The chapel at Noseley is NOT OPEN to the public.
View Leicestershire & Rutland Churches 01 in a larger map