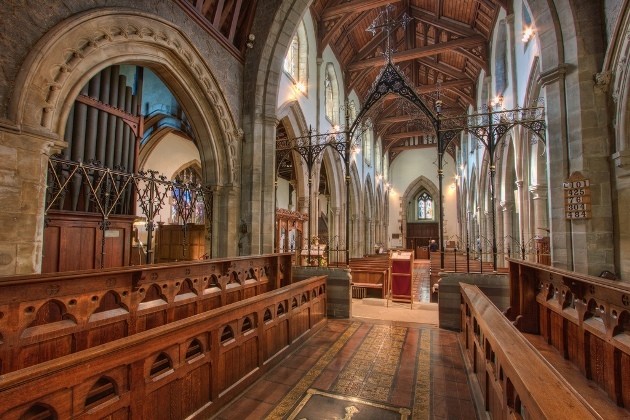 View from the chancel to the west tower arch

Narborough and its smaller attachment Littlethorpe lie a few miles south of Leicester with the River Soar lying between them. Both villages have seen large housing developments which in some respects has spoilt the villages, in fact Narborough for all intents and purposes is just one large housing estate on the north-west side of the B4114 which splits the village in two.
Littlethorpe now lies in the Parish of Narborough but originally was part of Cosby parish and had a small chapel of its own, the location of which is now unknown but it probably only lasted until the early medieval period. This would have been similar to the medieval parish of Huncote and Narborough where Huncote had the Chapel of St James and Narborough was the ‘mother’ church. 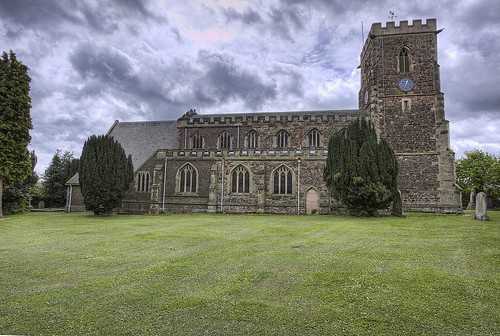 View from north of All Saints with blocked north entrance

Narborough is in fact a very old settlement and its original name was Norburgh or variations which seem to indicate a fortified settlement or manor early in it’s life. Roman finds have been found in the locality but this is no surprise as the village is on or close to the Roman Fosse Way.
The current church in Narborough dates from the 13th Century although it is highly probable an even earlier church dating back to the 10th century or before stood on or near the site. A Saxon tombstone called a Hogback was found near the church and is on display at the Jewry Wall museum in Leicester. 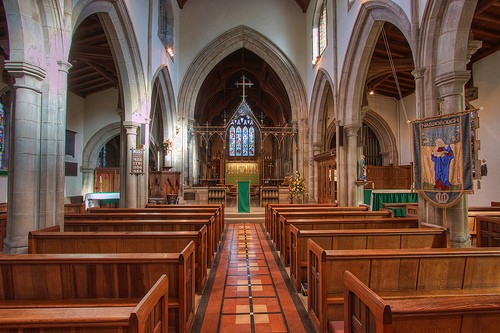 Looking towards the chancel

As befits a large village we have a good sized church which was largely rebuilt in 1856-1883. There are two good sized aisles, nave, chancel and north vestry with a west tower. The large nave of six bays has fine piers and strong shafts. The chancel was rebuilt in 1883 by F. Bacon. There is also a very nice Ascension window by Theodora Salusbury from 1929 (Carlton church has a another fine window by the artist) in the north aisle. If you examine the stained window carefully you will find ‘two fish hidden’ in the folds of the robes. 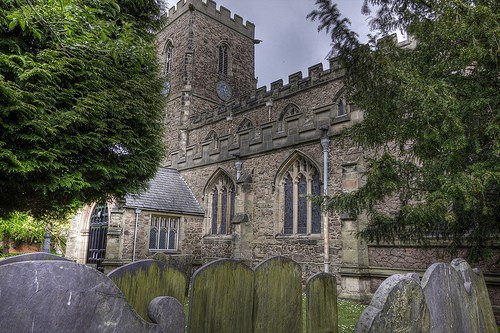 The original interesting Norman south porch was rebuilt in 1860 and cost £60, the font which has moved three times dates from the 13th Century and has tracery panels of various kinds including one with two parallel tree trunks. There are also sedilia in the southern aisle and a piscina. The graveyard is closed to burials now as these have transferred to the cemetery next door. In the actual churchyard there is a gravestone to a Harry Baker who died aged 49 in 1901 after being ‘thrown from a trap’, seems that road accidents have been going on for many years! 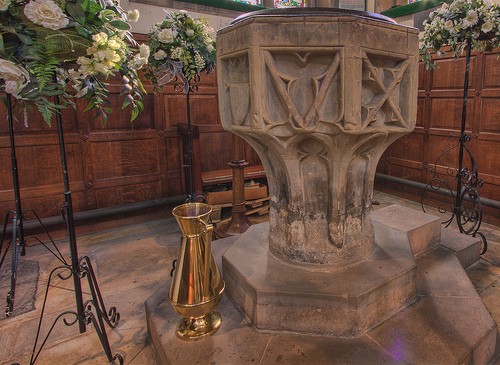 The church at Narborough has interesting features and although it has had the ‘usual’ Victorian makeover it still is an imposing building. The ornate reredo behind the altar is very fine as is the whole of the chancel area. It is a peaceful church in an otherwise busy large village and if you have the chance to find it open it is well worth a visit inside.
Services are still held here, they have or had an open day where you could climb the tower which gives excellent views over the village and Soar valley below. The church is now normally locked but they do have events and open days so keep a look in the events diary, they have a popular Christmas Tree display at Christmas. There are a few free spaces by the church for parking but there is also car park off Desford Road, although I think they now charge a fee there. Wheelchair access is fine but there is a high step from the road. A minute’s walk from the church there is a café, pub and a few shops so there are no issues with getting a coffee or a bite to eat.