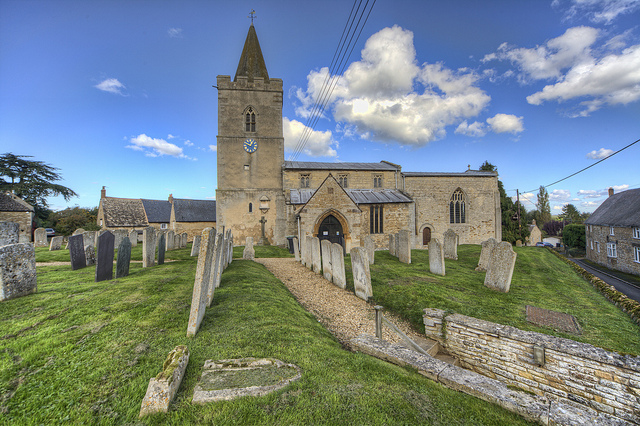 Just off the busy A47 main road to Peterborough is the village of Morcott which is seven miles south-east of Oakham. Most of you will probably have noticed the fine windmill to the east of the village which I have passed on so many journeys travelling along the A47.
With a recorded population of 329 in the 2001 census it is not a large village by any means but it is attractive and the church is especially fine, but more on that later.
At the time of the Domesday Survey the village formed part of the manor of Barrowden. In 1283 William Beauchamp, Earl of Warwick held the manor. Other land at Morcott attached to the advowson of the manor was granted by Henry I to his crossbowman, Ernisius Balistarius (what a fantastic name!). He was succeeded by his son Richard who died in 1223 when a Simon de St. Liz obtained a grant of the custody of the land and heir Richard the Crossbowman (Balistarius) when he married the widowed wife (Amy or Anne). 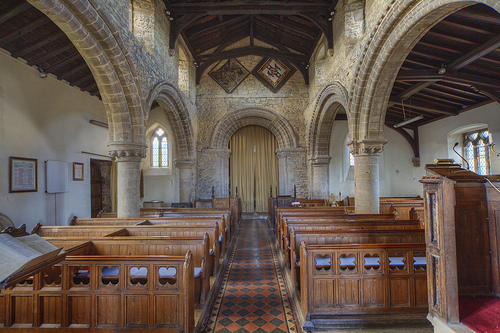 Sir Everard Digby of Stoke Dry acquired the manor in 1528. He had a son Kenelm who died in 1590. Another son, also called Everard was a member of the ill-fated Gunpowder Plot of 1605. In 1596 while still a teenager he married Mary Mulshaw a young heiress who brought with her Gayhurst House in Buckinghamshire where he moved to with his wife. He was converted to Catholicism by the Jesuit priest John Gerard and he built a hidden chapel and sacristy at Gayhurst. Digby became embroiled in the plot and after the capture of Guy Fawkes the remaining fugitives took flight. Digby was eventually captured and took to the Tower of London and Gayhurst the family seat was ransacked and Mary Digby left destitute.

He was tried in Westminter Hall on 27th January 1606 and faced the executioner on 30th January. Cold and grubby Digby faced the executioner first and after a short speech he was stripped of his clothing except for his shirt and murmured “O Jesus, Jesus save me and keep me”, he climbed the ladder and was hanged for a short period. They then cut the rope and he fell back to the scaffold, wounding his forehead. Fully conscious, he was then castrated, disemboweled and quartered. The bodies were then loaded onto a wattled hurdle and they were dragged through the throngs of spectators pulled by a horse to St Paul’s Cathedral churchyard. 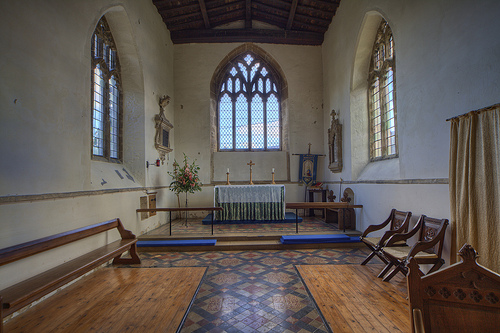 The chancel was restored heavily in the Victorian era.

Well we seem to have gone off track here, so lets return back to the history and church of Morcott. Actually Everard Digby sold the manor at Morcott in 1599 to a Richard Broughton so the link ended there.
The church of St Mary consists of a chancel with north organ chamber, two bay nave with clerestory, north & south aisle, south porch and a west tower with short spire. Dating to the 12th century are the lower half of the tower, the north aisle and then fifty years later the south aisle around 1200. The Norman arcades may predate the 12th century work and could be 11th century, some of the capitals also have good carvings.
In the 13th century the chancel was lengthened and a chapel was added on the north side, in the 14th century the church had new windows inserted in the aisles as well as the clerestory added. 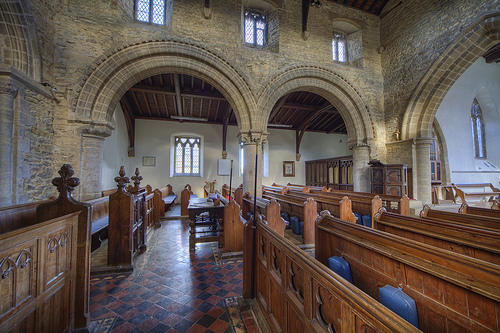 The church underwent a restoration in 1874-75 which included widening the north aisle which then incorporated the chapel as a organ chamber and vestry. The east window dates to the Victorian restoration but the lateral ones are 15th century. Back to the Norman capitals which are also enriched on the underside, and the capital of the pillar has on its four sides a human head (west), a ram’s head (north), a grotesque human head (east), and a fir cone (south), between which are volutes terminating in fir cones. The capital of the west respond is elaborately scalloped and the abacus enriched with cheveron, while the capital of the east respond is carved with stiff-leaf foliage of rather naturalistic type, below a band of nail-studded lozenge-shaped trellis ornament, the abacus being enriched with studded intertwining bands. 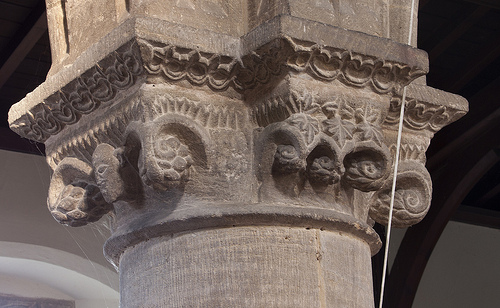 The trefoiled ogee-headed piscina of the aisle altar has a circular projecting bowl carved in front with a male head, and below the south window is a wide four-centred moulded recess, the hollow of the moulding enriched with four-leaf and other flowers, containing the table tomb of William de Overton (d. c. 1400), the slab of which has an incised cross and French inscription round the edge.

The font is plain and of octagonal design and dates to the 13th century. The churchyard and approach to the church is pretty and there is parking by the gates. There is a also a pub nearby for some refreshments if required.
Morcott is an attractive village and with the church it is worth a trip out to visit. The church is usually open during daylight hours.

The church at Morcott is usually OPEN. More information here.