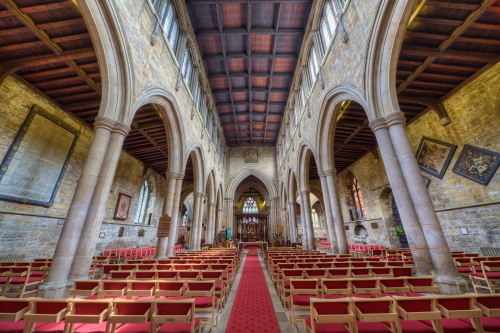 Where do I start with one of the highlights of Leicestershire? This beautiful large church has much to admire from its cruciform layout to its grand central spire and the fine 48 windows of the clerestory that run around the nave and also unusually the trancepts. You can see at once why in 1927 this church was being seriously considered to be Leicestershires’s Cathedral in place of one in Leicester itself. However in the end they did choose the present ‘cathedral’ in Leicester, but that was perhaps more ‘political’ than it actually being a better building. The town of Melton is some 14 miles north-east of Leicester and has a population of over 25,000. 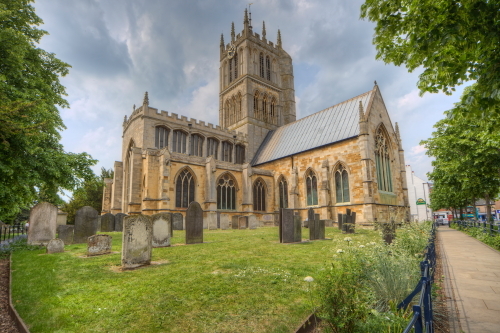 Melton has had a long and important history and it may have been occupied by the Bronze age with later Roman occupation. After the Norman Conquest a Robert de Mowbray was given the manor – hence Melton Mowbray, the Melton may derive from the early English word Medeltone meaning ‘Middletown surrounded by small hamlets’. In the Domesday Book the town was a thriving market town of some 200 inhabitants with weekly markets (the third oldest market in England), two water mills and two priests. In 1549 following the Dissolution of the chantries, monasteries and religious guilds, church plate was sold and land purchased for the town. Resulting rents were used to maintain Melton School; first recorded in 1347 and one of the oldest educational establishments in Britain. 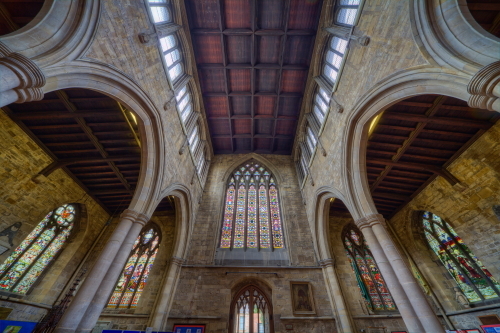 The west window, clerestory and and arcades from the west end of the nave.

There are still some very old buildings around the church and the centre of Melton is quite attractive in itself. Although the town’s prosperity was based on the wool trade from the 14th century onwards (if not before), it also became the most important fox hunting town in England from the 18th century until the Second World war. Many fine hotels and houses were built for the hunting fraternity during this period. The expression ‘painting the town red’ is supposed to have originated in the town when the Marquis of Waterford and his hunting party found some pots of red paint and decided to paint the high street after a successful hunting trip in 1837. 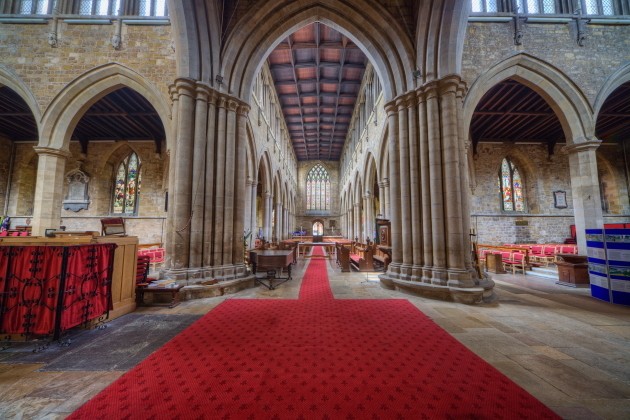 The central crossing of the church and the supporting archway

The church of St Mary is one of only four parish churches in England with trancepts with flanked aisles. The church is 164ft long and the stately tower rises 100ft. Most of the fabric of the church dates from the 13th and early 14th centuries. Entry today is via the west doors into the large spacious nave. The first thing that struck me was the magnificent clerestory that runs around the nave and also the trancepts, made up of 48 windows it really is an impressive sight. The clerestory and upper parts of the tower with its pinnacles and external turret are Perpindicular and date to the 15th century. The lower parts of the tower date to the 13th century. The nave, aisles, and trancepts were paid for by the parishioners; it must have been a very wealthy town with many merchants as the chancel paid for by the monks from Lewes Priory could not match the expense and grandeur of the rest of the church. The six bay arcade of the nave are fine but I was most impressed by the massive pillars supporting the tower in the middle of the church, it feels as though you can actually ‘see’ all that weight being carried on these huge arches. Most, if not all of the church was completed by early in the 16th century, a restoration took place in 1865-9 by G. G. Scott but this was done with much care and is not intrusive in any way to the earlier fabric. There are some monuments scattered throughout the church and much of further interest. There is in fact much more information on the church I could add – but there is not enough room here, however for sale in the church are some excellent booklets and information leaflets which will help – and the sale also helps the church so do please buy. 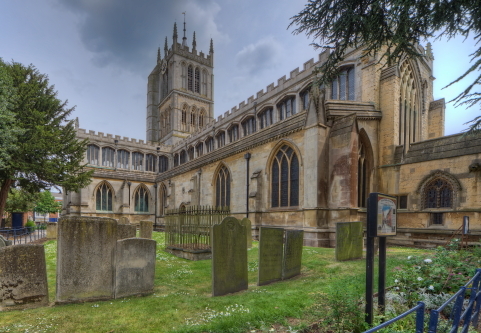 Now I could finish here, but there is also Melton Mowbrays Pork Pies and Stilton cheeses to consider. The town is now ‘branding’ itself as the ‘Rural Capital of Food’ and there are a plethora of shops selling Pork pies and stilton cheese. There is of course ‘Ye Olde Pork Pie Shop’ perhaps the most famous and popular for tourists but after consultation with the ladies at the church I visited a butcher just around the corner called ‘Jones’ who made excellent pork pies, no family connection honest….
There is parking nearby (all pay and display), plenty of facilities around of course, and the church is open and manned everyday from morning till late afternoon. There is parking outside the west door for disabled access should that be required.
The people of Melton Mowbray are justly proud of their fine church and it will be in my top dozen which is under review in September. It is a most impressive structure with a stately demeanour and grand setting. Not one to be missed and one of my favourite visits to date.