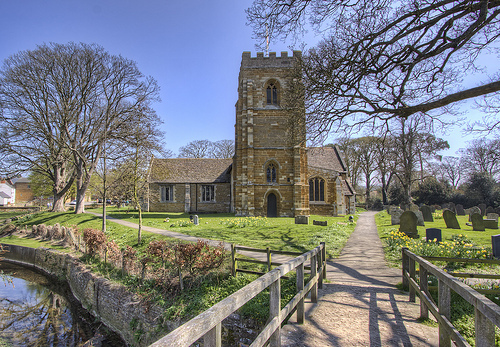 The pretty church and village at Medbourne

The small village of Medbourne is some 15 miles south-east of Leicester and 5 miles north-east of its nearest town at Market Harborough. It is tucked away in the rolling hills in the far corner of Leicestershire near to the county line of Northamptonshire & Rutland. The name is probably Anglo-Saxon and means ‘meadow stream’, but the Saxons were not the first in the area and there have been Roman finds which indicate a Roman settlement in the area. 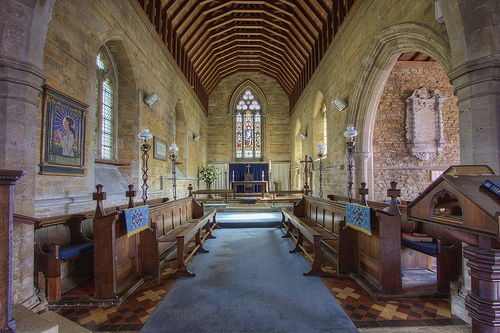 Medbourne had a church in the late 12th century on the manor held by the king. By 1220 two daughter chapels at Blaston (these are online) and another at Holt were in existence. The circular site on which the present church stands could indicate an earlier moated area and perhaps a pagan shrine. 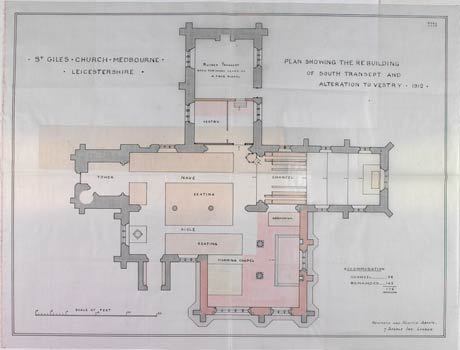 The church has a curious arrangement and is unusual in its layout. The church consists of a crenellated west tower (15th century), south aisle with trancept leading off south, chancel and north trancept. There is no north aisle and it is probably easier to review above than try and explain it. Most of the church probably dates from the late 13th century and it seems as if an ambitious programme was undertaken but never completed. The south trancept arches are more elaborate than the south arcade. The north trancept also dates from the 13th century but the 17th century changes to alter the use to a schoolroom have changed the windows and other features. There are now toilets and it is also used as church rooms. The chancel underwent a restoration in 1876 by E. Dolby of Abingdon, the cost of £575 was paid for by Rev. C.F. Eastbourne. Dolby returned in 1880 and he extensively restored the nave and south aisle. There was also a 17th century clerestory and this was also removed at this time and the 13th century font was placed on a new base. 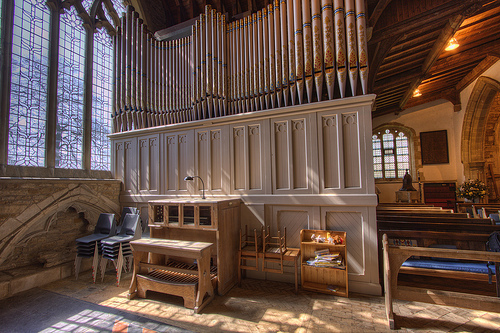 The clock is unusual in the pendulum being seen inside the church, this was given by the Rector L. P. Baker in 1852. The chancel east window is dated 1875 and the window in the east wall of the south trancept was placed there in 1946 by the friends of the Leicester Royal Infirmary to commemorate the life and work of the Rev. Doctor Watts, founder of the hospital and curate in charge of the parish between 1762 and 1774. The grand organ was made by Foster & Andrews in 1800, it was originally at Christ Church, Northampton but was given to St Giles in 1962 when they had a new instrument. 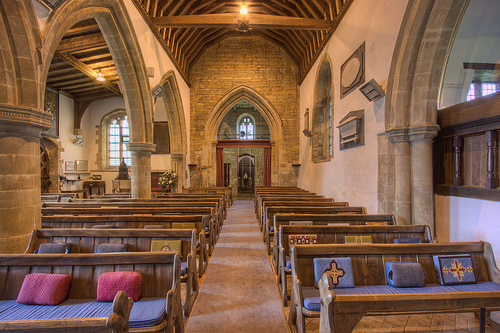 The church is situated in the middle of the village bordered on one side by the stream which is crossed by a medieval bridge and the other side a road. It is a pretty building in a pretty village and there are plenty of walks around Medbourne and parking by the church on the road.

The church is always open which is a plus and it is worth a visit, in fact around Medbourne there is plenty to admire from the beautiful countryside, sleepy villages and open churches.