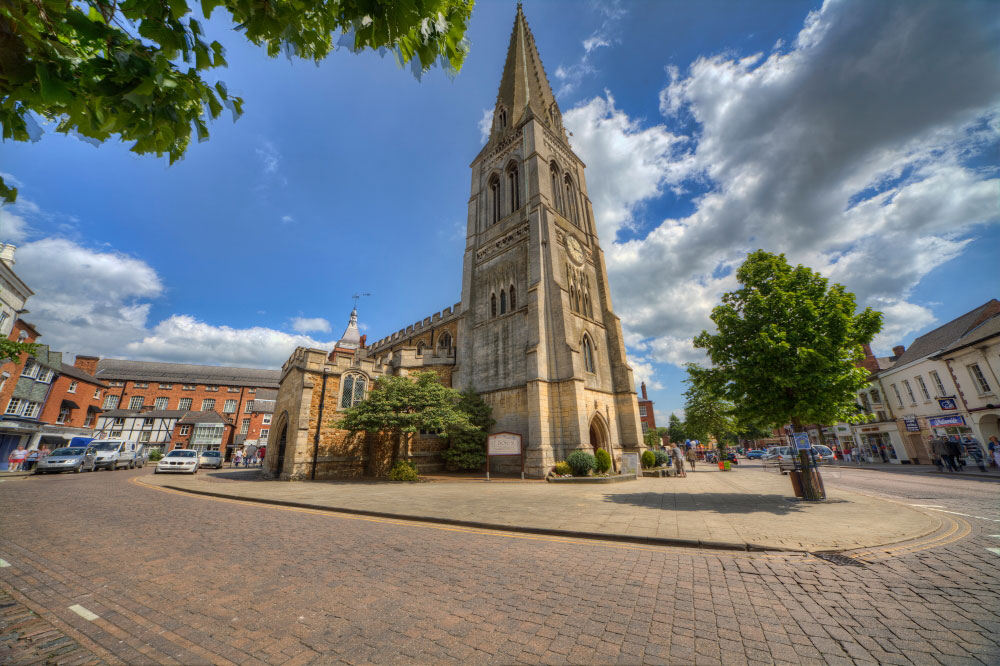 The fantastic church at Market Harborough

The town of Market Harborough has a population of over 20,000 and is the administrative centre for Harborough District Council. It was formed as a new trading settlement probably in the early 13th century by incorporating the three villages of Little Bowden, Great Bowden and Arden. The market was established by 1204 and has been held on every Tuesday since 1221. There is much more information on the town and its history via the link at the British History website here. 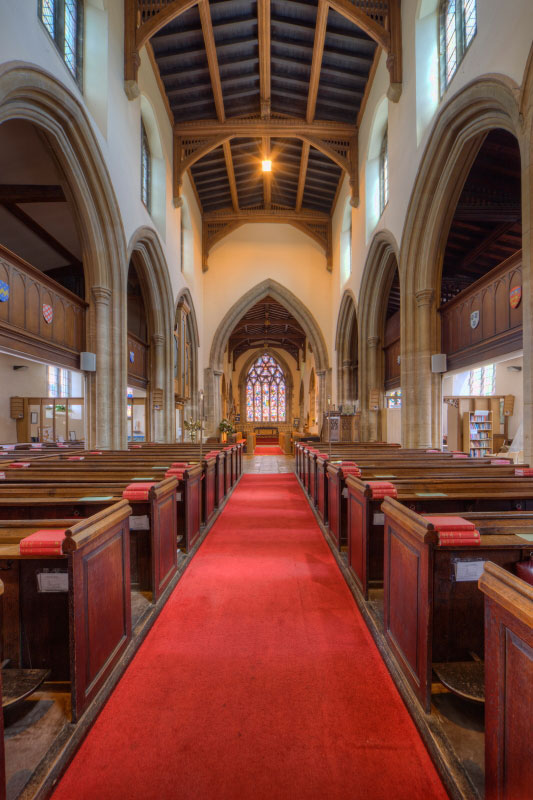 View east towards the chancel from the nave area.

The chapel at Market Harborough (as that is what it actually is) was first mentioned in 1220 when it was dependent on the parish church of St Mary’s at Arden but St Marys gradually fell into disuse and is now a ruin nearby and St Dionysius became the parish church . The steeple is classed as one of the finest in England. The tower, 154 ft. high to the top of the spire, rises in four stages and has diminishing buttresses at the angles. 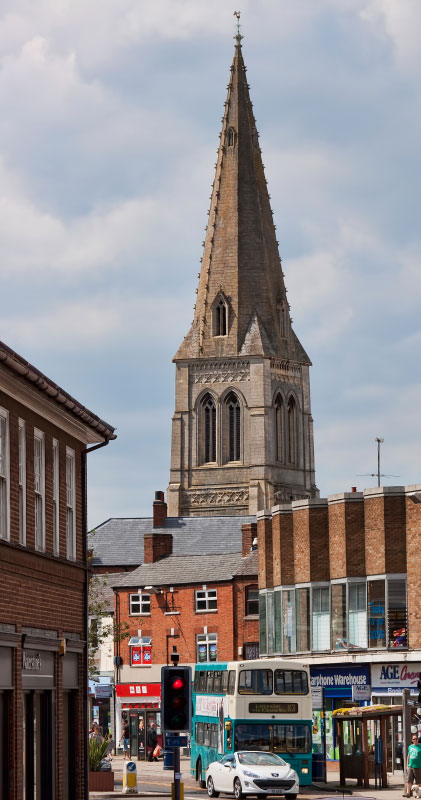 The grand spire of St Dionysius dominates the town skyline

Above the west doorway is a window with forking tracery of c. 1300. At the third stage are triple niches surmounted by crocketted canopies and pinnacles. The tall belfry stage, divided from the one below by a band of quatrefoils, has paired two-light windows containing reticulated tracery. Above them is another band of quatrefoils and, immediately below the spire, an arcaded corbel table. The spire is tall and slender, with crockets to the angles. There are two tiers of lights, widely spaced. Both these and the broaches are comparatively small and do not interrupt the main outline of the spire. There is also a sundial on the south wall of the tower dating from 1791. 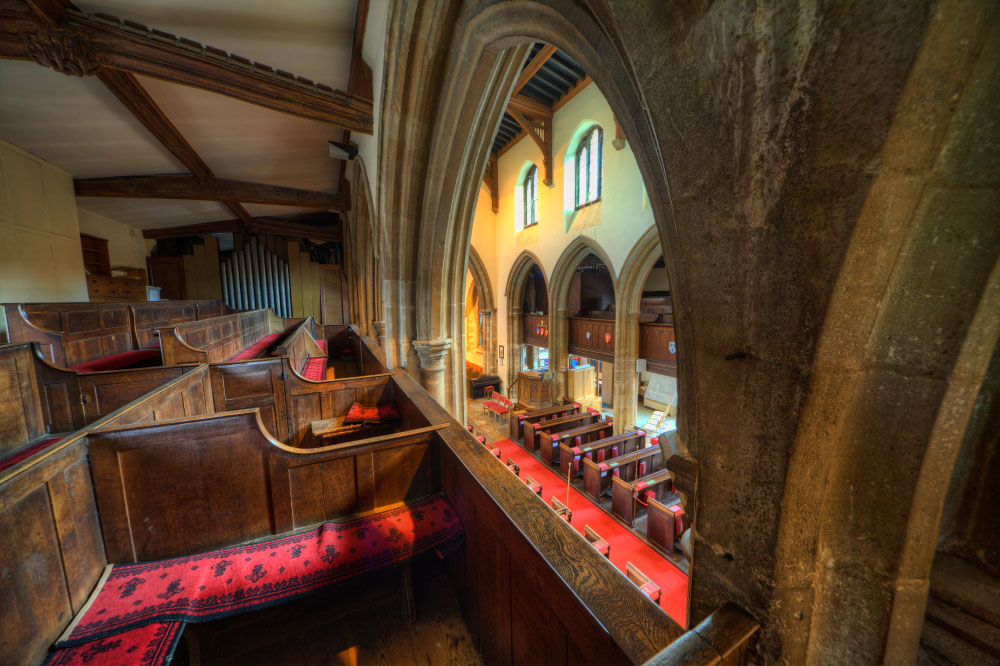 The nave, aisles, and porches were probably built in the early 14th century, but were subsequently much altered. The three large chancel windows on the south side show the transition from early to fully developed Decorated tracery. The north windows were similar but one is now missing. The flowing tracery in the five-light east windows has been replaced, but is said to be a copy of the original. The chancel retains two sedilia, probably re-cut, and a south doorway, now blocked. During whitewashing in 1770 a painting of the Crucifixion and the date 1434 were found above the chancel arch but there is no sign of this now. 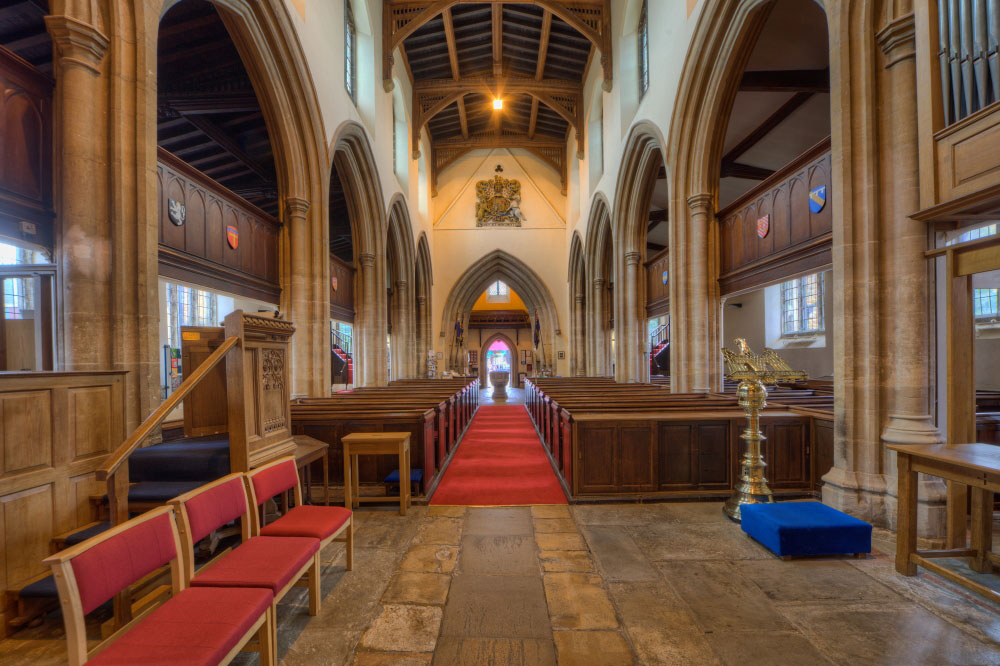 View from nave towards the west door, the old roof line can be seen above the coar of arms

Inside, the church has north and south galleries still with their boxed pews, these were installed in 1836 extended east in 1844 and thankfully were never removed. The chancel has some fine windows and the grand east window was installed in 1860 by Hardman. There is also a Royal Arms dated 1660 above the west wall of rich plasterwork completed by Allen of Northampton. The font is Victorian and dates from 1888.

The church is open every day and there is plenty of parking nearby (some free some pay and display) and of course there are many places things to see and do in the pretty market town which has much character. The fantastic spire dominates the town and it really is a fine sight. In fact it is so high I had trouble completing the external photography (trying to photograph the exterior on Carnival Day was a bad mistake) so I will be returning one early morning in the near future. 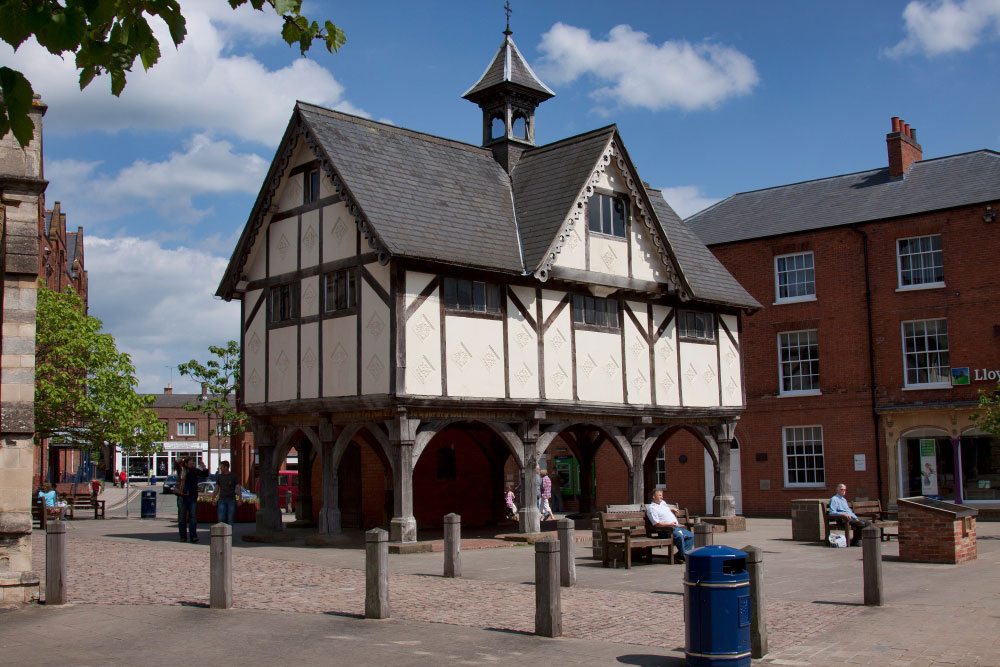 If the truth be known I was rather disappointed by the interior apart from the box pewed galleries which are unusual and its fine arcades. However the church does have some redeeming features, its location and fine exterior are worth a trip itself, but also this church is always open with staff who are most informative and helpful. So next time you are in Market Harborough do not just walk by the church but walk inside and enjoy the peace and quiet of this fine building.