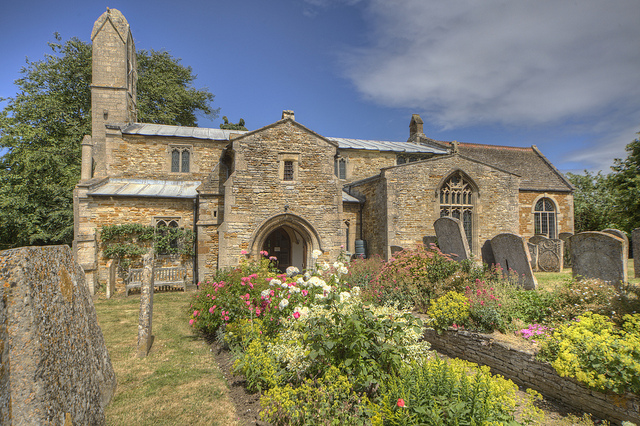 The pretty church at Manton

The small village of Manton lies just south of Rutland Water and is a pretty little village with some quaint ironstone cottages. The cycle route around the reservoir passes through the village and it is popular with walkers and cyclists.
Through the centuries the village was known as Manatona, Manetun, Maneton and Maynton. In 1086 the parish was one of the outlying ‘berewicks’ of Hambleton which belonged to the King. Henry I gave half the manor to Abbey of Cluny but this reverted back to the crown in 1414 when Henry V seized lands belonging to alien priories. The Kings esquire a William Porter was given custody of the manor in 1415 he then sold it on for a great sum to Ralph, Lord Cromwell. During the 16th century the manor was held by the Duke of Suffolk and then through descendants to the Sidney family, then the Dales and various other families. 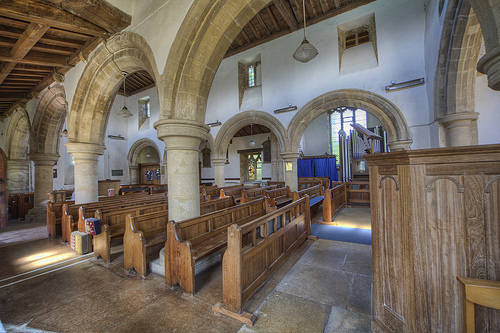 The other half of the manor was granted to William Mauduit the King’s Chamberlain. The Earl of Warwick held an estate at Manton including a mill which became an endowment of a chantry or college at Manton founded by William Wade. In 1351 he obtained a licence for two chaplains to celebrate the soul of William and his ancestors thrice daily in the Lady Chapel at Manton Church. The first a requiem for the founder and all Christian souls; the second at the celebrant’s discretion was to be a mass of the Holy Trinity, the Holy Spirit, the Holy Cross, the Blessed Mary or St. Thomas of Canterbury, and the third was to be of the season, such as Christmas and Easter. 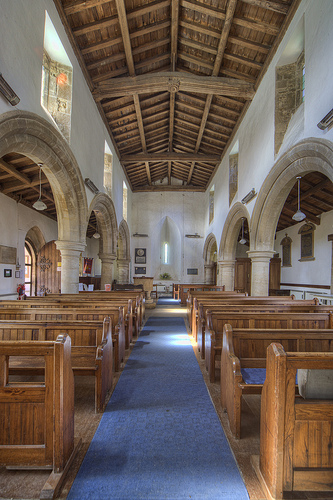 Edward VI dissolved all chantries in the middle of the 16th century, and gained much from the act. The Earl of Leicester held the chantry in 1563 which was then leased to Edward Harington in 1581, and then passed to the Burneby family.
The church at Manton is very pretty with its double bellcote and honey coloured stone. It has a very pretty little churchyard flanked by some attractive cottages. It has a chancel, nave, north and south aisles, north and south trancepts and a south porch with a chamber over. In Pevsners guidebook it is described as a ‘homely lovable church which seems to have grown gradually and comfortably’. I have to agree the whole building is full of character and it is perhaps one of the most enjoyable churches I visited in 2011. 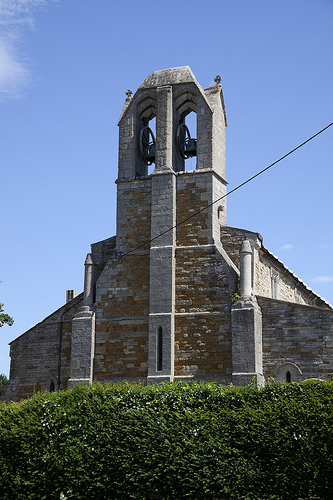 The earliest fabric dates to circa 1200 which are the aisle arcades with their circular piers and double-chamfered round arches. The west end dates from the 13th century with its heavy double bellcote and limestone buttresses. The pretty south porch with its two-storeyed porch is probably 14th-15th century and the trancepts date to the later 15th century. The font is Norman with blank arches on shafts. The chancel is rather plain with windows on the south side which let plenty of light into the area and although it dates to the 13th century it has had later restorations. There is a coat of arms to George II on the chancel arch which is very colourful. 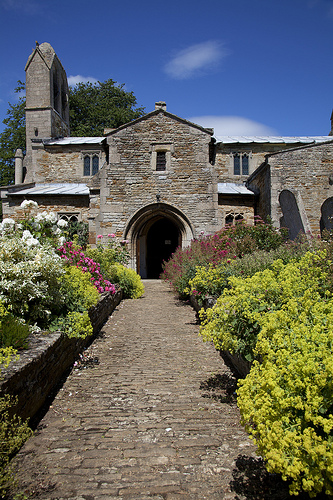 In all the church is extremely pretty and I must mention again the churchyard which is kept to a very high standard. We both appreciated the hard work that included beautiful flower beds and well kept lawns. One to visit especially with so many other churches nearby and Rutland Water.
Martinsthorpe a deserted village is ½ mile west of the village along Lyndon Road worth a walk if you have time. I will have an entry for the deserted village soon.