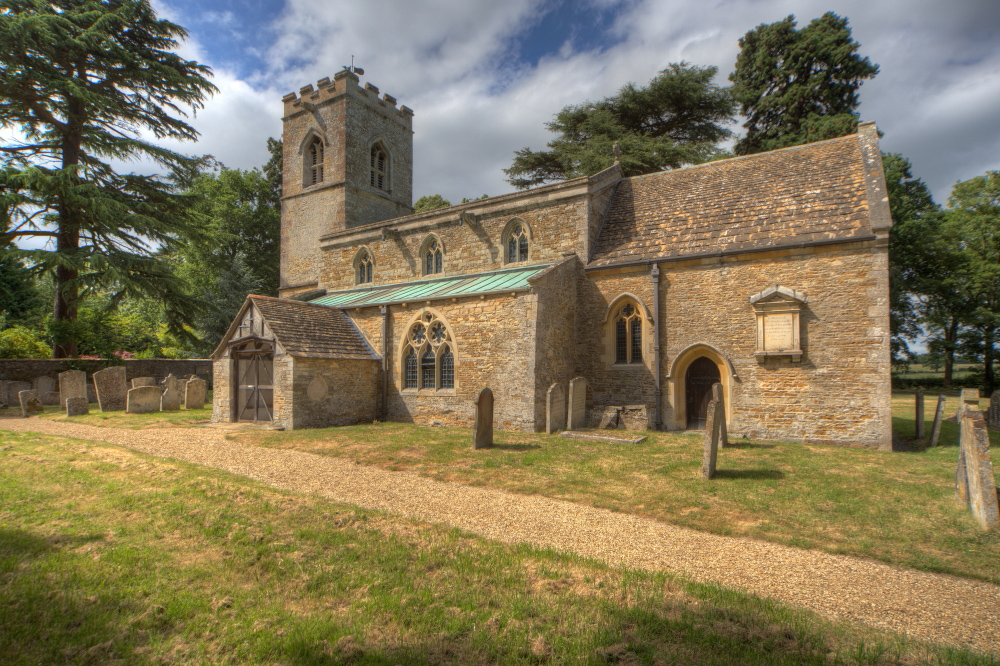 Just a few miles south of Rutland Water is the small village of Lyndon which in 2001 had a recorded of around eighty people. It is rather a ‘blink’ and you’ll miss it village with most of the properties away from the main road but it is a pretty little place with a nicely situated church.

The parish is not mentioned in the Domesday Book but was probably one of the outlying ‘berewicks’ of Hambleton which now lies to the north across Rutland Water. The undertenants from 1086 were the local family of ‘Lyndon’. Roland son of Simon was lord of Lyndon in 1167. Simon died before 1217 but left three sons. Roland the eldest went to the Holy Land and was reported dead in 1221-2, the second son Alan was presented to Lyndon church after the death of his elder brother and acquired the manor. However the death of Roland seems to have been incorrect and he returned from the Holy Land with two pilgrims in 1231 and they received hospitality from Alan in that year but were never seen again. 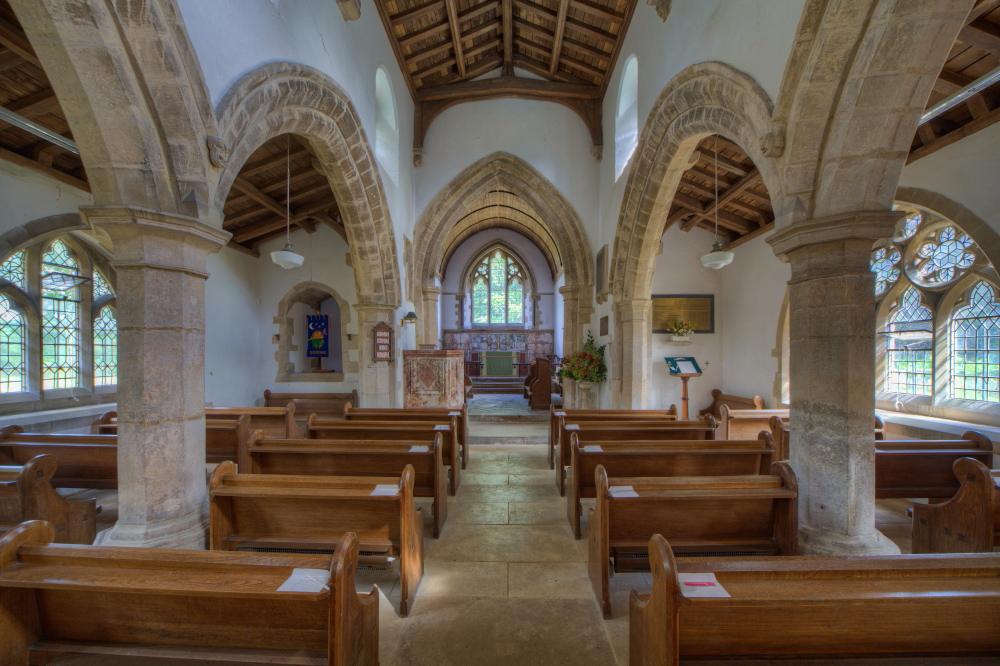 Interior of St Martins, the windows are all part of the Victorian restoration

A body was then found in the river near Stamford which was identified by his sister Alina and his ‘amica’(?) Emma (by whom he had a son) as Roland. Suspicion fell immediately on Alan but nothing seems to have been done and he died in around 1239, his wife Maud survived him and then Richard the third and younger brother of Roland and Alan held the manor until his death in 1255. In 1310 the manor reverted to Edward II who passed it to Ingelard de Warley, his Keeper of the Wardrobe. The manor passed through various notable local families including the Daneys’, the Hasylden’s, the Hunt’s, and the Barker’s from nearby Hambleton who built a large house at Lyndon in the late 17th century. 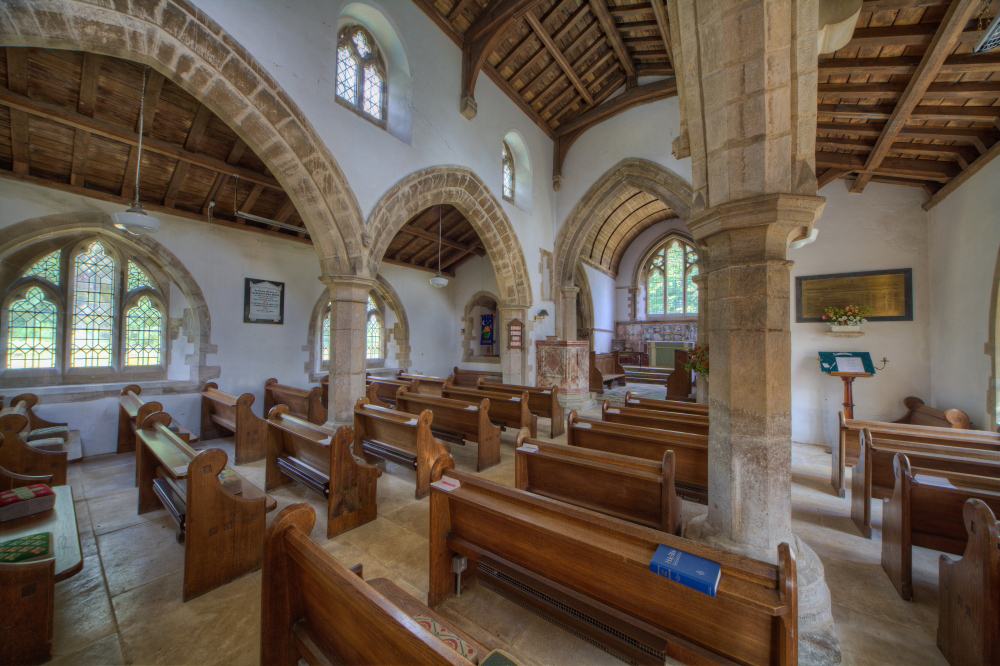 View of north aisle and arcades, the whole church is nicely proportioned

By the mid 19th century the Conant family acquired the seat of Lyndon and the Hall. This fine building started in 1665 and completed in 1675 lies just south of the church and is still in possession by the same family today. You can read more on the village history by following the link. The church of St Martin now sits remote from the village in the Hall grounds but there is parking by the church and it can be clearly seen from the road. The small church consists of a west tower, nave, chancel, north and south aisles and south porch. There is a vestry and organ chamber on the north side. The church was probably rebuilt in the 13th and 14th centuries but the church underwent a major restoration in 1866 and few of the original features remain. 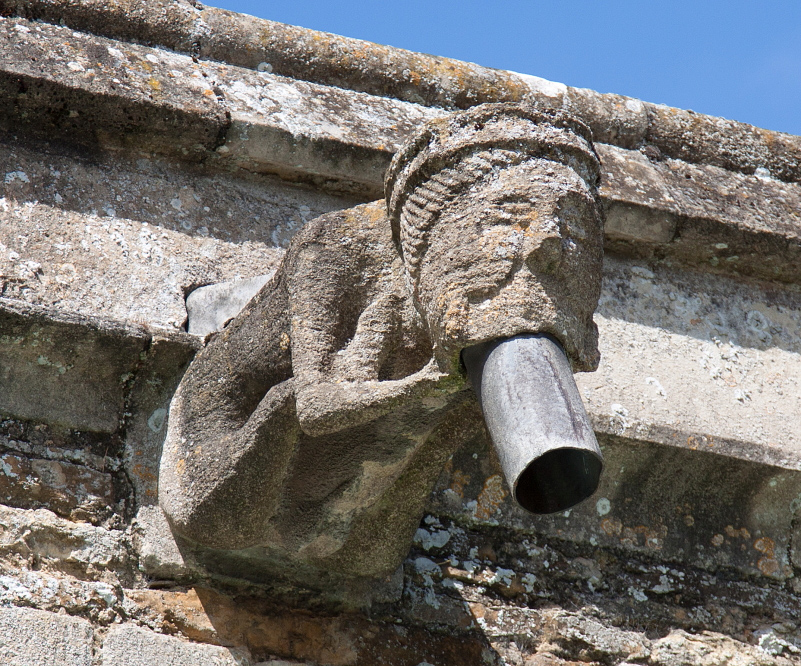 Gargoyle on tower, there are four probably all 14th century

The nave arcades date from the 13th-14 centuries with the clerestory added slightly later. The narrower south aisle is apparently that of the early 13th-century church, the north aisle having probably been added, or a former one widened in the later rebuilding. The upper part of the tower was rebuilt or remodeled in the 15th century. The organ chamber and vestry are modern. The font now used was found buried in the churchyard in 1866. It is of 12th-century date, in the form of a capital, square at the top and circular below, the angles and each face of the upper part somewhat rudely carved with scrolled undulating and other ornament, and animals of archaic character on two of the sides. The bowl rests on modern supports. A discarded 18th-century baluster font is now in the churchyard. 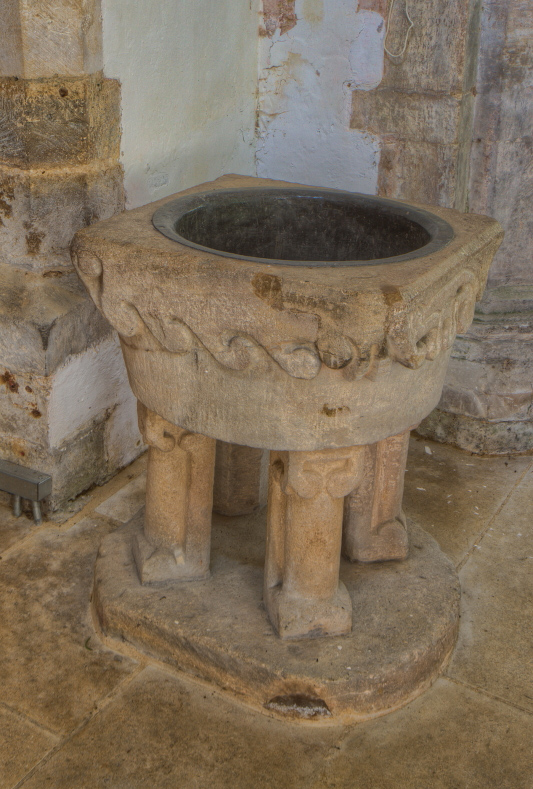 The rather ugly marble pulpit dates from 1856. The fittings are all modern and the church in internally plastered. The church seems to have been in a bad state of repair in the 17th century. In 1605 the Archdeacons report stated there was no decent pulpit, the church as unpaved and ‘the rain cometh in most intollerablie’, there was no pewter stoope pot for the communion and the chapel on the south side of the church was in a bad state of decay and ‘annoyeth the chauncell very much’ and the repair thereof belongs to Mr Hunt. The churchyard fence was also in decay so that hogs ‘do root up the churchyard.’ In 1619 ‘the stoope pot’ for the communion was like an alehouse quart, the register book was not subscribed according to the Canons, the aisle northward was wholly down in the roof. In 1640 the chapel on the south side of the church had become utterly ruinous and the cross in the churchyard was also ruinous and there was no paten. 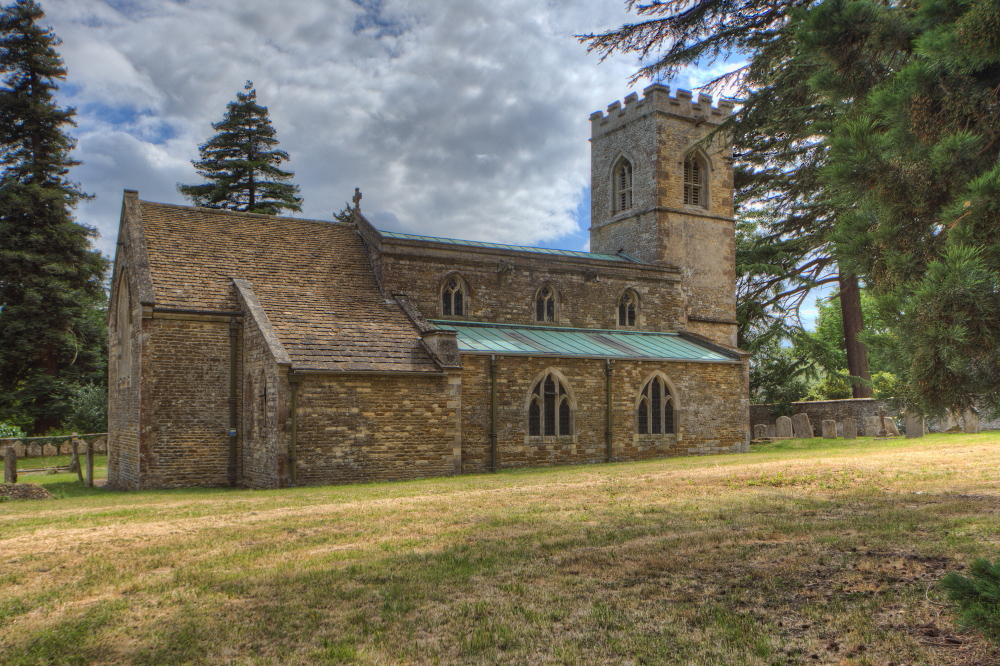 North side of church showing the later vestry and organ chamber

In 1681 the churchwardens were ordered to set up the Ten Commandments, the Creed and the Lord’s Prayer, and buy a new Erasmus’ Paraphrase, a Book of Canons, Bishop Jewell, a Book of Homilies, and a Table of Marriages. I have read of other churches suffering during this period and I will try and find out more as the problem seemed more widespread. I am sometimes unkind to the ‘Victorianization’ of our churches but they have probably helped keep many of our churches in a good state of repair into the present period and this must be taken into account.

I really liked the church at Lyndon, it has a fine setting next to the Hall and is surrounded by mature trees and parkland. The church like so many in Rutland is open every day from around 9:30 until 17:00 and is worth a trip out.