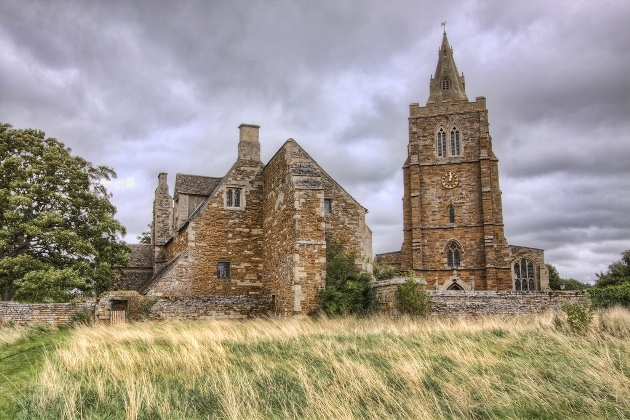 This pretty village of around 400 people is at the southern point of Rutland some 2 miles south of Uppingham and 19 miles south-east of Leicester. The church of St Andrew is important for a number of reasons and is closely tied with Lyddington Bedehouse which was once a Bishop’s Palace and is now owned by English Heritage. In this regard this church is unique in the two counties in having the remains of a Bishop’s Palace attached. 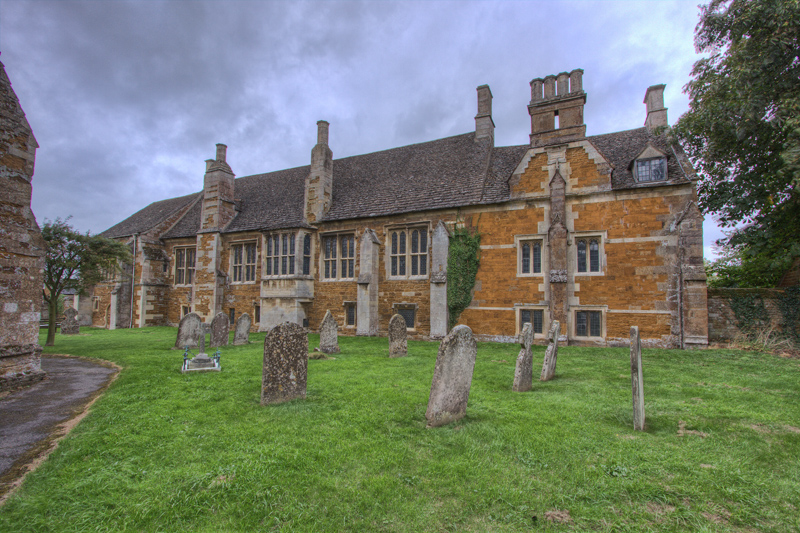 After the Norman Conquest, William I created the Diocese of Lincoln. This large Diocese stretching from the Humber to the Thames needed other residences for the Bishop and his retinue on their travels, and the Bishop chose Lyddington as such a location. They used the Palace until 1547 when it passed to the Crown and then to the Cecils of Burghley in 1600. They converted the remaining Palace buildings into the Jesus Hospital, later known as the Bedehouse which served this purpose for over 300 years until the 1930’s. 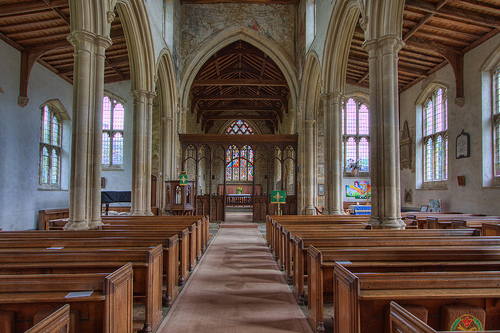 The church of course had close ties with the Bishop’s Palace and this imposing large church is a result of this close association. The first mention of a church at Lyddington was in 1163, but the oldest parts of the present church dates from the 14th century and were probably started by Bishop Burghersh, these being the chancel and west tower. The nave with its tall five-bay arcades was rebuilt in in 1480 by Bishop Russell or Bishop Smith. The roof was restored in 1890 and you can still see the high pitched roof line of the original 14th century church where the nave joins the tower at the west end. There was also a gallery at the west end of the nave against the tower but this was removed in 1879. 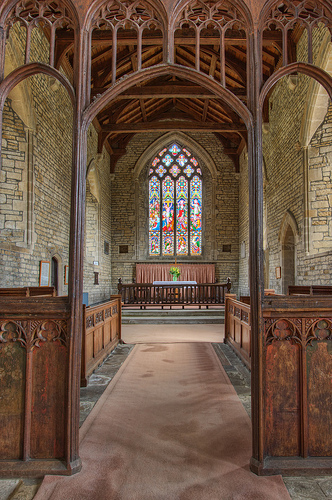 At the entrance of the chancel we have some items of interest, on the south side behind the pulpit we have a medieval wall painting uncovered in 1937 which is believed to show Edward the Confessor dressed in an ermine cloak and cap holding an orb. Above the painting is the rood entrance which would have given access to the rood loft where musicians would have played. There is also the remains of the rood staircase inside a turret to the north of the chancel. The rood screen dates from the perpendicular period (14th-a5th century). Above the chancel arch is believed to be remains of a painting showing the Last Judgement. 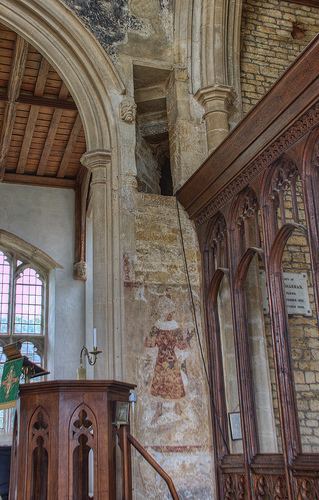 In the north aisle we have the font of unknown date and some original 15th century glass showing the heads of a King and bishop. As in most churches the aisles were used as chapels and both these at Lyddington have a piscina at the eastern end. The chancel area has some unusual features of interest, high in the chancel walls are six acoustic jars set in the wall. These earthenware pots with their openings flush with the wall were supposed to amplify the voice of the priest but there is some doubt whether they would have really helped. There are very few examples of this practice in the UK but there are more in Europe and the original idea may have come from the Greek or Roman theatres. 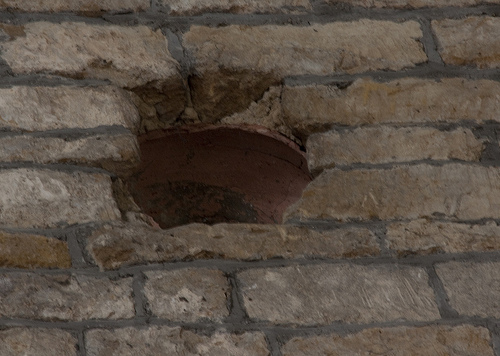 In 1890 the church underwent restoration and the chancel floor was raised, the triple sedilia and piscina are now much closer to the floor than originally intended. The other unusual feature in the chancel are the rails that surround the altar. These were added in 1635 (the south-west post has the date carved into it) and would have usually been across the the chancel in front of the altar and not surrounding it. In 1634 Archbishop Laud (ed – we have ran into the archbishop a few times now at Staunton and Ibstock) gave instructions that all altars should be railed off, but Bishop Williams of Lincoln disagreed and at Lyddington we have his preference for rails on all four sides.

Lyddington is another pretty village and the church and Bedehouse are one of the highlights of Rutland The church has a beautiful nave with its high arches and large windows and there are many other interesting features in this church to enjoy. The church is open (at least at weekends I believe) and the Bedehouse opening times are in the link below (closed in winter). There is parking in the village but by the church and Bede House it can be a challenge as there is little space. Access to the church for wheelchair users is fine and also the ground floor of Bede House, but please check on the English Heritage site below for further info. There are facilities in the village and also more in nearby Uppingham.