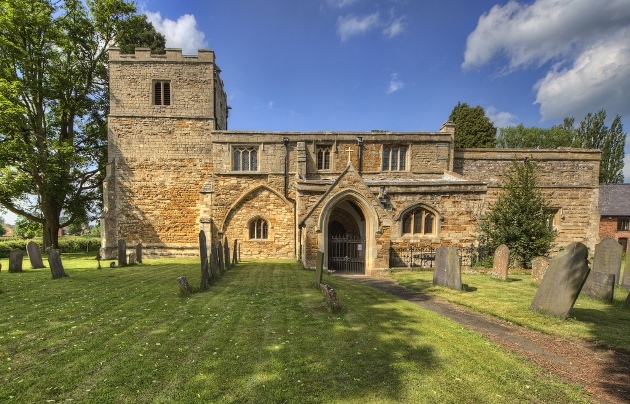 The village of Lubenham is in the very south of the county less than two miles west of Market Harborough its large neighbour. The village is bisected by the busy main road into Harborough and the church is only a yards away from the county boundary with Northamptonshire. 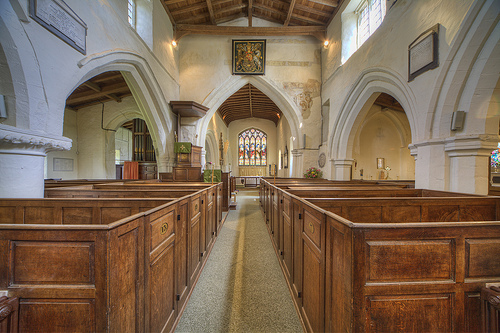 The nave and chancel, some of the medieval paintings can just be seen here.

Lubenham is one of the few churches in the county not to be heavily restored by the Victorians, and although the church is a ‘muddle’ of different styles and periods it is an enchanting little church which is worth a visit.

The church has two Norman arches in the north aisle which date from the 12th century. The church consists of a squat west tower, nave, north & south aisles, south porch and vestry (previously the north chapel).
On arriving we tried to enter the north door, but on finding it locked were just about to leave when we heard a voice beckon us from the vestry door towards the east of the church. Luckily a churchwarden was inside and heard us banging around the other door trying to gain entry. The church is usually open but the ‘time locked’ door was out of action so it was good timing that gained us access. No pun intended. 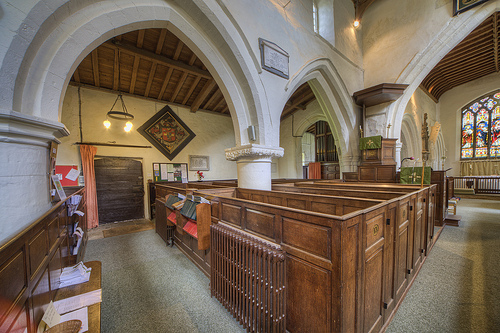 All Saints has a peculiar charm with its white washed walls and is a most homely comfortable church. It has many nooks and crannies to explore and with the box pews and three-decker pulpit plus remaining medieval paintings it is a must to visit, even if it is just for the fine view of the south exterior. The aisles probably date to the late 13th century as does the chancel arch and chancel. The clerestory dates to the 16th century and most of the pews as well as the fine pulpit are Georgian. 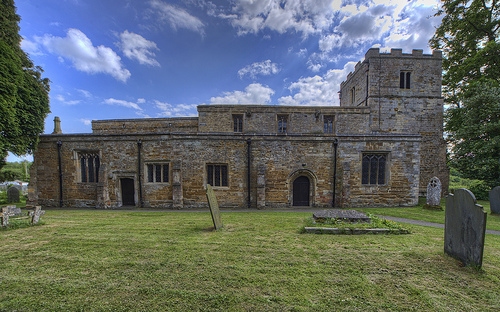 The north side of the church with its squat tower, the top dates from the 16th century.

There is a Royal Coat of arms over the chancel arch, and they also have another Royal connection in that Elizabeth II visited the church in the 1950’s when visiting a nearby friend and sat in the south aisle. There is a fine tapestry in the church commemorating the millennium with many of the villagers incorporated into the design – it is very interesting and a nice addition to the church.
The medieval wall painting on the side of the chancel arch reveals a female figure whilst behind the pulpit we have a crown perhaps topped with foliage. From the exterior the church is a delight with its differing styles and pretty aspect it is worth visiting even if the actual church is locked. There is much more information on the ancient parish in the link above at the excellent British History site. 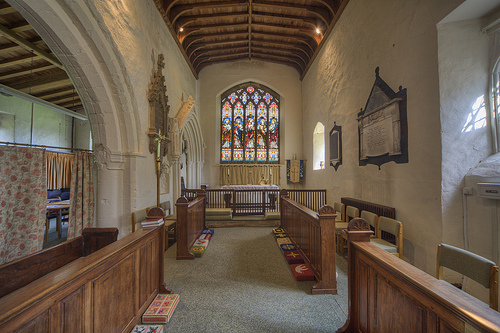 The 13th century chancel, the north chapel (now vestry) can be seen on left through arch.

Lubenham church is a real gem, pretty, interesting features, good architecture and also hardly touched by the usual ‘Victorianization’ that took place in the 19th century. There is a pub in the village and lots of other amenities in nearby Market Harborough.

Josephine 2011
I tried to look at this church a couple of years ago, but it was locked. I rang today and found it is now open and we were very pleased to get inside and look at all its features. I would have appreciated a more detailed guide, but found the history booklet enlightening. There is a great deal of interest packed into a small space. The comparison of the box pews with the seating for the poor was good. I also liked the squint, the tapestry and the wall painting.

N Stollery 2011
The time lock is now working again. From 9am until 4pm the lock is open.